The "Hub" of Central Oregon

Redmond, Oregon, sits only 17 miles north of Bend and the quick and easy access to outdoor recreational opportunities help support the city as one of the fastest-growing residential and industrial communities in Oregon. Where mostly sunny days proceed clear, cool nights and precipitation is minimal, keeping true to the designation of the high desert.

In the early 20th Century the area was inhabited by settlers determined to carve out a piece of their American dream amongst the sagebrush and juniper trees. Redmond gained its name from Frank and Josephine Redmond, who settled in what would become the downtown area. Lured with the possibility of free homesteading and promise of the railroad's arrival, land and business speculators, along with farmers, came to town. There were even promotional pamphlets stating, "Everything points to Redmond as a commercial center. Merchants, professional men, manufacturers, home seekers should investigate Redmond now, before the railroad is completed, before values enhance greatly, before the big opportunities are all taken." 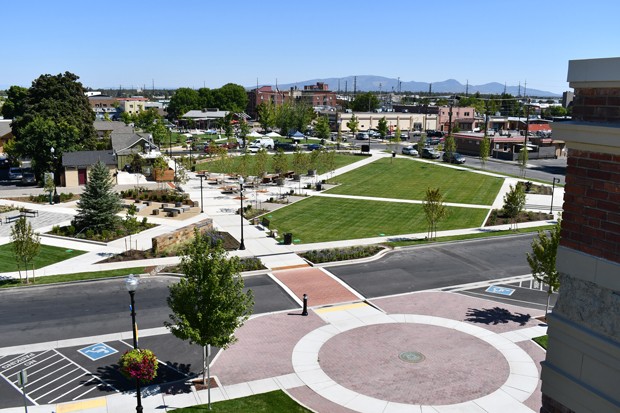 The population was 216 people when the City of Redmond was incorporated on July 6, 1910. The downtown was lined with storefronts, a library, a hospital, bank, lumberyard, several businesses and a volunteer fire department. On Sep. 21, 1911, the golden spike was driven on what is now Evergreen Avenue, indicating the completion of the rail line. This meant that agricultural and lumber products could now be exported, while also transporting passengers easier than before.

Related The Bubble That Won't Burst: As people from affluent cities pour into Bend to escape COVID-19, home sales and rent prices skyrocket, leaving locals priced out of the market

The Bubble That Won't Burst
As people from affluent cities pour into Bend to escape COVID-19, home sales and rent prices skyrocket, leaving locals priced out of the market
By Laurel Brauns
Local News

Bend and Redmond were commercial rivals up until 1915, when two large lumber mills decided to locate in Bend, leading to Bend's more rapid population growth. The 1920s brought more construction including the beginnings of the airport and Redmond Union High School. In 1928 the New Redmond Hotel opened to guests, built out of brick after the former had been destroyed by fire. During the 1930s the airport was improved and turned into the Redmond Air Base by the Army Air Corps to train B-17 and P-38 pilots, later becoming Roberts Field. During this time the completion of the Highway 97 bridge over the Crooked River Canyon and irrigation canals in the area allowed for easier access and thus helped the lumber industry and potato farming to thrive through the 1980s.

Redmond's grown to an estimated 32,000 people and continues to entice new residents with lower home prices and a slower pace of life—the Central Oregon experience that many want, and a stable economy centered around a mix of retail, small manufacturing, health care and tourism. In January the median sales price of a home was $377,000 and a total of 66 homes sold in Redmond. Housing inventory is low throughout the region, but many will be looking toward Redmond to call home in this coming year