Over the past week, the drought and the danger of fire saw most locals complying with the repeated pleas to avoid personal fireworks on the 4th of July. That part of the 4th went relatively smoothly, with no major fires reported in the area. Another facet of the 4th, however, offered a big area of concern—and one that demonstrates how much work our region still has to do in order to help all feel welcome.

As the pandemic winds to a close, Bend opted to forego most of its usual celebrations in the streets—but over in Redmond, Madras and Prineville, parades went on as usual. In Redmond, the Redmond Chamber explicitly stated in its parade rules that "this is a family friendly a-political event and we request that no political flags be promoted... Violation of these rules are grounds for dismissal and you will be banned from participating in future parades..." 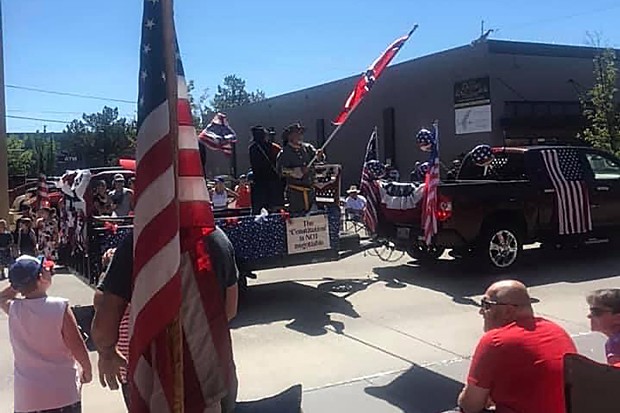 Imagine locals' surprise, when a Confederate flag appeared on one of the floats in Redmond, and in Madras, too. In a parade where no political flags were supposed to fly, a "Civil War re-enacter" brought perhaps one of the most political flags Americans know. Some Redmond locals said it "ruined the parade."

To many Americans, the Confederate flag is a symbol of the traitors who sought to break the country in two and who opted to do so in order to preserve their "states' rights" to own other human beings. That side thankfully lost; slavery was abolished, and those who continue to use that flag as a banner for their "heritage" are holding a piece of cloth that is an overt representation of racism; a token of nostalgia for a time when babies were ripped from their mothers and sold as chattel and when white supremacy was so pervasive there were hardly words to describe it.

Thankfully, the Union held and we are no longer in those times. But raising that flag on a day when many celebrate the birth of this nation is a threat and disrespect to the many veterans that have given their lives to preserve it. After a year of increased attention on the discrimination and racism that people of color continue to face in our nation, raising a Confederate flag at a parade honoring the nation's formation is a blatant affront. The people of Redmond, Madras and all of Central Oregon deserve far better.

Redmond, as most locals know, is a town in transition. More people are moving in every day. Housing prices are through the roof, which brings a different demographic to the community. New, more urban-minded businesses are giving the town a different look. For those who have lived in Redmond a long time, the changes may be a lot to handle. It will make some angry, frustrated, and willing to do drastic things to assert themselves in a town that is becoming more like a small city and less like a small town every day. While newcomers, too, have a duty to try to understand local customs and to adapt accordingly, they should not be expected to adopt an 1865 mindset or to accept that Redmond is complicit in outright racism in order to live there.

Other media outlets have treated this flag situation as a both-sides issue; one that should be debated by giving voice to the "side" that still trots out the argument that the Confederate flag is a benign symbol of "heritage," or at least one that, in a free country, is still allowed under the U.S. Constitution and its First Amendment. But both-sides-ism, usually a journalistic effort to explore the many perspectives of an issue, is not appropriate here.

Both sides don't deserve equal footing when one side is supporting domination of the other. It is fair to ask locals to adopt a "both sides" mentality when they're forging relationships with someone on the other side of the political aisle. A Redmond Democrat or independent can and should keep an open mind when discussing with a Redmond Republican how tax funds could be spent, or when debating how land-use laws in the state affect us all. Urban-minded people should endeavor to understand rural values, and vice versa.

In the spirit of cooperation and community harmony, people in towns like Redmond—or Bend, for that matter—could all use a dose of patience and conciliation when it comes to "the other side." But in this, there is no "both sides." Symbols of hate have no place in public events.