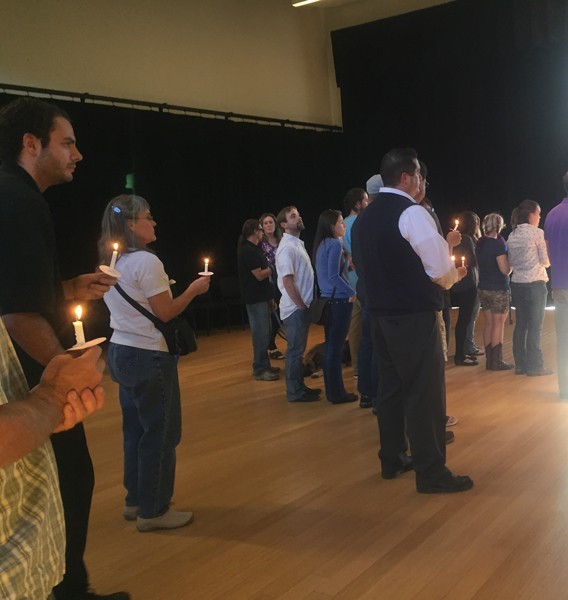 A tragedy all too familiar struck home for Oregonians on Thursday, Oct. 1, after a gunman opened fire in a classroom at Umpqua Community College in Roseburg, killing nine, and wounding seven. Though the tragedy occurred more than a three hour drive from Bend, it sent shock waves through the local college community.

On Friday, dozens of students, faculty, staff, and community members carried candles as they gathered in Willie Hall on the Central Oregon Community College campus in Bend to honor the victims of the UCC shooting.

"Our hearts go out to the students, our colleagues, and their families affected by this event at Umpqua Community College," COCC President Shirley Metcalf told those gathered for the candle light vigil.

At the vigil, those gathered wore green and white ribbons—UCC's school colors—in memory of those who died. Most were students just starting their college careers. Many were locals. Jori Messner, vice president of legislative affairs for the Associated Students of COCC, organized the event and asked the crowd to remember the heroes and the victims.

"Remember the students who are studying pre-med, nursing, and EMT and how they fought and protected the rest of their students because they had been trained to do so by going to the community college," Messner said. Several public safety officers and comfort dogs were among the crowd.

Becky Johnson, vice president of OSU-Cascades, said Oregon community colleges are all connected and share the sadness over the tragedy, but safety is still the school's ultimate priority.

"We will do everything that we can to keep our students and our staff safe and healthy, but we can't guarantee that things like this can't happen in our world," Johnson said.

Her statement served as a chilling reminder that Oregon public colleges cannot ban people with legally obtained concealed carry permits from carrying guns on their campuses.

In 2011, the Oregon Firearms Educational Foundation—Oregon's only "no compromise" lobbying group, according to its website—filed an appeal against the Board of Higher Education and the Oregon University System arguing that the universities cannot authorize a firearms ban on public college campuses. The suit came after a Western Oregon University student carrying a handgun with a permit was suspended. The Oregon Court of Appeals ruled that firearm possession could only be regulated by the state legislature.

COCC's gun policy states that firearms are prohibited, except as provided by state law. In other words, the college strongly discourages students from bringing weapons on campus, while acknowledging that it cannot prohibit students from carrying a gun if they have a valid concealed carry permit.

But Matt McCoy, with the COCC Office of the Vice President of Administration, said that guns aren't the problem, it's how people use them. He acknowledged the presence of firearms in the rural community, explaining that people love to hunt and fish.

"The firearm in and of itself is not a bad thing," he said. "The use of a firearm illegally or for nefarious purposes, that's the problem certainly. But we have an aware campus."

"I think really there's a lot of self-policing that occurs on this campus and people reporting because people care," Bennett said.

And if a time should come when student self-policing isn't enough, Bennett says the campus has emergency plans in place by the door of every classroom, including tips for staying safe in a shooting.

"It really gave us a taste of how we would respond with countless law enforcement and fire responders to a major incident," he said.

As a COCC student, Messner believes the campus is safe.

"I recognize that even the safest of communities can have wrongs and can have mistakes be made, but this community makes me feel safe," she explained. However, Messner said it's daunting to know a mass shooting happened to a community college similar in size. "It's an opportunity for our state to evaluate their regulations concerning campus safety."

Rep. Earl Blumenauer (D-Oregon) echoed a similar need for action in a statement on Thursday.

"These tragedies are at epidemic proportions and happen in America at levels that far and away exceed levels in any other developed country in the world," he said. "Something must be done."

In the meantime, communities are coming together to provide support for those affected by the mass shooting—one of 296 so far this year, according to the website shootingtracker.org—including two members of the Deschutes County Victims' Assistance Program, who went to Roseburg on Thursday and assisted with notifying victims' families and supporting the wounded.

Umpqua Bank and the Greater Douglas County United Way have created the Umpqua Community College Relief Fund for victims and their families. Donations can be made at any Umpqua branch with all proceeds going assist families directly.