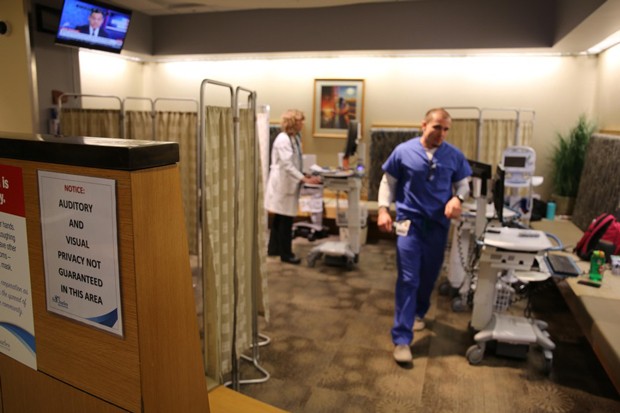 It was just another Tuesday at work for nurse Monica Schulz, and the stakes couldn't have been higher.

"We've got a lot of sad situations going on right now, with a lot of people leaving this world to another world," said the intensive care unit manager in Bend, her voice breaking: "We're working really hard with those families to get them comfort and help that be a very peaceful transition."

Lately, Schulz's difficult ICU job has been even harder because of crowding in the hospital, which serves not just Bend's population, but a vast sweep of rural Oregon. St. Charles has the state's only high level trauma center east of the Cascades. – Emily Cureton, OPB

Attempts to rein in Oregon's hugely complicated retirement system have left agencies and others with high costs.

Thousands of Oregon public workers could see smaller retirement pots if lawmakers pass a slate of changes to the state's retirement plan.

About 176,000 people working for state and local government, ranging from teachers to firefighters to wildlife biologists, are part of the Oregon Public Employees Retirement System, known as PERS.

Under a proposal from Republicans and Democrats in the Legislature, employees who make $30,000 a year or more could expect to see the benefits they were going to get reduced, depending on when they were hired and how long before they plan to retire.

The change would continue until the state catches up and nearly fully funds the retirement system. – Claire Withycombe, Oregon Capital Bureau via Portland Tribune

Portland Drafts Ordinance to Crack Down on Airbnb

Portland's mayor is planning to introduce an ordinance that would force online short-term rental companies like Airbnb to take down unpermitted rentals.

The proposed crackdown in Portland follows a federal court ruling in March that dealt a legal blow to Airbnb's long-held position that it is not responsible for policing unpermitted listings on its site.

Portland's revenue division has been trying to reach a voluntary agreement with the company for more than a year over unpermitted rentals.

The city says Airbnb's latest offer represented a step backward, so it is preparing to try a tougher tactic: an ordinance that goes after Airbnb's profits. – Amelia Templeton, OPB