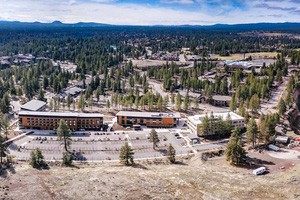 Oregon State University-Cascades is breaking ground on an expansion of its Bend campus. A new academic building will sit on land redeveloped from former waste and mining sites.

Builders plan to move soil from an old landfill to fill a pumice mine adjacent to the university's existing footprint. The filled-in mine will provide the ground for a 50,000-square-foot academic building "devoted to science, technology, engineering, arts and mathematics," according to the university.

Grace-Science Labs donated $1 million to the project, according to the OSU-Cascades website. The company develops, manufactures and sells high tech lab equipment from its facilities in Bend.

The project will develop more sidewalks, roads, parking, an amphitheater and green spaces on Bend's West side. OSU has promised off-campus infrastructure to support the growth, such as a roundabout on Colorado Avenue to help with traffic, and a new pedestrian bike path, leading to the expansion's to-be-built entrance.

With headwinds blowing from the White House to Oregon, local officials are increasingly signaling their support for migrants and refugees.

"If you live in Gresham, refugees are your neighbors," Piluso said during a press conference organized by Unite Oregon. "In 2019, the Legislature stood up and said Oregon won't be the amazing place we love without immigrants and refugees."

The nonprofit's supporters gathered Saturday, Aug. 3 for a roundtable at its East Portland office on Southeast 122nd Avenue, spurred by swirling reports that President Trump's policy advisor, Stephen Miller, is pushing to cap refugee admissions at zero in 2020.

While that story remains hearsay, the U.S. State Department did set a ceiling of 30,000 refugees to be allowed on American soil in 2019, down from 45,000 the year before. —Zane Sparling, Portland Tribune

The parent company of GateHouse Media, which bought local newspaper The Register-Guard last year, said Monday that it will acquire its competitor Gannett Co. for $1.4 billion.

The companies are the two largest newspaper publishing chains in the United States. Gannett is the publisher of USA Today and New Media Investment Group is the parent company of GateHouse Media, which owns The Register-Guard and hundreds of other papers across the country.

GateHouse is known for aggressively cutting costs and has laid off newsroom staff in the past. The merger will allow the combined company to cut $275 to $300 million annually "while continuing to invest in newsrooms," the companies said in a joint press release. But the release did not mention layoffs or other cuts to newsrooms.

The Register-Guard, the daily newspaper for Eugene and surrounding areas, was bought by GateHouse Media in January 2018. Since then, reporters, copyeditors and other RG staff were laid off, the Eugene Weekly reported. —Gina Scalpone, Michael Tobin, Daily Emerald