Bunny Wailer, the last living founding member of The Wailers, passed away on March 2. His work with Bob Marley and Peter Tosh stands as a touchstone for reggae lovers everywhere and many an oversized spliff was rolled and burned in his honor. I'm often asked, "Have you ever been busted for cannabis?"

The answer: Why yes...yes, I have. And I blame Bunny Wailer. 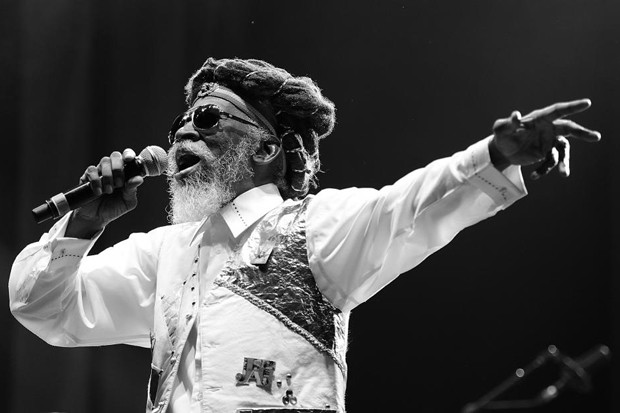 It was 1997 and I was attending a Bunny Wailer show at Champoeg State Park in Oregon. I couldn't have been more excited to attend, as both Bob Marley and Peter Tosh passed away before I had the chance to see them play live. I was so excited in fact, that I baked up a sizable batch of my aforementioned ultra-strong pot cookies and rolled up two dozen spliffs the size of small carrots.

The show was everything I had hoped it would be and between songs Bunny often called out "Jah!" which was our cue to yell back "Rastafari!" And of course, to light up another joint and exhale towards the stage. I was three cookies in and high. I mean, high. As high as I had ever been with that perma-grin that leaves your face sore the next morning.

The show wrapped up, and the group I was with returned to the parking lot, which was really nothing more than a grass field with cars everywhere. Once we got to the car, someone suggested we light up the remnants of the last joint we had, which had been reduced to a stub about as long and wide as a cigarette filter. Considering how high everyone still was (minus our very patient and long-suffering sober driver), doing so wasn't really necessary, but it was a warm summer night, and the roach wasn't going to smoke itself.

No sooner had I lit it up then I heard a squeaky voice attempting some sternness while telling me to "freeze!" Figuring it was a fellow stoned concert goer, I drew a deep hit and blew it out toward the direction of the voice, calling out "Rastafari!"

Except it was a cop. Whoops.

Well, it was a cop, sort of. It was one of the baby cops in training, an honest to Jah pimply faced young cat who was maybe - maybe - all of 19. You could feel his adrenaline pumping from 10 feet away, his eyes wide and with more enthusiasm than I have ever mustered for anything ever, he came up to me, dropped the bike he had been riding, and shouted into his radio "I GOT THEM! I HAVE THE POT SMOKERS!"

From out of the darkness, more of the babies in blue emerged, most riding mountain bikes, some on foot. I doubt anyone was over 22. It was like an episode of "21 Jump Street: Oregon Edition." The car door was still open; Paul Blart Jr. pushed by me and pulled out the now empty Tupperware of cookies, in which perhaps a teaspoon of crumbs remained. Taking a deep dramatic inhale, Officer Clearasil turned to his partner and proudly exclaimed, "Look! This is where they kept their pot weed!"

My friends and I looked at one another, and began giggling, then roaring with laughter - convulsing, tears streaming down your face laughter. The absurdity of the situation was lost on the Rugarat SWAT team, who didn't understand why we were not quaking in fear and respecting their au-thor-ah-tay.

In short order, we were set upon by three police cars, two officers on horses and several on ATVs. The swarm of Lil' Law Enforcers just made us laugh even harder, which was visibly irritating the older officers.

"This isn't funny, you're in big trouble." said one, which sent us into a second round of spasming laughter. They kept us there for an hour. I explained the empty Tupperware and roach were mine and I was written a citation. They took the Tupperware, lest I lick the remaining crumbs and start murdering families. I went to Salem to appear in court a few weeks later, but the DA never filed charges.

I still use the phrase, "pot weed."