A spotlight on the grief and confusion of a teen suicide, and a call for schools and communities to do more to step in 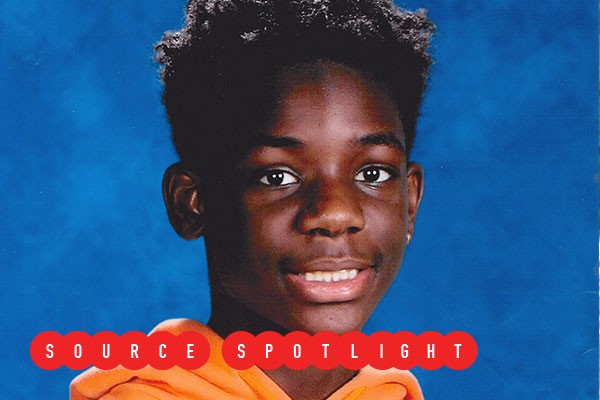 Deshaun Adderley was "the kind of kid who never left the house without saying, 'Bye, Dad, I love you,' or 'Bye, Mom, I love you,'" says his father, Donavan Adderley.

"And now," Donavan adds, "I really miss hearing him say that."

Deshaun was 14 years old and a freshman at Summit High School when he took his own life Dec. 14., following a fight with another student.

In the months of grieving since then, Donavan has decided to talk about suicide prevention, especially among youth, and wants the community to talk about it, too.

"I think my son's suicide should be brought out to the community. I could see he was depressed. I saw him changing," Donavan says. "Now that he's gone, I feel like I should've done a little more and assured him that everything was going to be all right."

Donavan says some mornings, Deshaun would ask him if he had to go to school that day, but not because he was sick. Donavan says his son told him there was another student at school who was constantly staring at him, poking fun. Deshaun told his father, "He's making fun of me and I want to hit him so bad, but I can't."

Deshaun, not driving yet, often took his skateboard to school. The other student was 16 and drove to school, according to Donavan. Deshaun, described as a kid with a big smile that could light up any room, loved skateboarding, art and riding quads.

The Bend Police Department initially investigated the suicide but has since turned the case over to the Deschutes County District Attorney's Office. Because the case involves a juvenile, a DA spokesperson could neither deny nor confirm the investigation.


"I think my son's suicide should be brought out to the community. I could see he was depressed. I saw him changing." —Donavan Adderley tweet this

Donavan says a school official told him it's always been a problem at Summit, that students are a "mixture of very wealthy kids, and then kids like my kids."

Donavan, 36, is a native of the Bahamas, but has lived in Bend since 2006. At that time, a cousin who'd just bought a house and had a growing family called him, looking for help. Donavan then met his wife, Nora, who was raised in Bend. They've been married seven years.

Last fall the couple separated for a few months. Donavan and his two sons, including older brother Jerron, moved out of their modest apartment in southwest Bend. Jerron and Deshaun later returned to the apartment. During that time, Donavan says he began seeing changes in Deshaun. Deshaun would come home, barely say hello, and go straight to his room and lie on his bed in the dark. One day Nora called to report that Deshaun, who had always been proud of his bushy hair, had shaved his head, and later bleached his remaining hair.

Donavan has this advice for other parents: "If you do see any signs of change having to do with depression, that's the time to jump in and get involved. With online threats, parents need to be more aware of what their kids are doing online and with social media. They need to keep up on their kids and be more aware."

Donavan says he appreciates the people of Bend "for stepping out and the overwhelming amount of support for my wife and my family." He also thanks his "church family" at Mission Church in Bend.

Peer pressure was goading Deshaun into a fight with the other student, according to Donavan. He says Deshaun started asking about the ramifications of a fight if it wasn't on school grounds.

"I told him to go to a counselor. Yes, before the fight, Deshaun asked about fighting off of school grounds. Why didn't I get a call from that moment on? I just don't get it."

Donavan said he later found out that Deshaun had been put on a "watch list" at school, but the family was never informed. "You have my son on a list, that's not normal. You put my kid on a list? Why didn't I know about it?"

Donavan would later learn that Deshaun went to talk to a school counselor the day of the fight. "That was my son trying to run away, telling them about the fight. He was reaching out in his own way."

On March 9, Summit's Principal, Alice DeWitte, sent a letter to families detailing ways in which the school is helping to "ensure our students have the positive social-emotional and physically safe school environments they deserve." The letter did not mention bullying and appears to be a response to the rash of school shootings around the country.

Director of Communication and Safety for Bend-La Pine Schools, Julianne Repman, wrote in an email to the Source Weekly, "Suicide is a community issue. We need to continue to engage all members of our community and to continue to normalize the conversation in ways that provide help and hope."

Before Deshaun took his own life, he posted a video of the skirmish involving him and another student inside a Summit High restroom. Donavan said he did not see the Instagram post of the fight until two or three days after Deshaun's suicide. He learned about the post from Deshaun's mother, who still lives in the Bahamas.

"Tears came to my eyes. I never even knew my son was an aggressive person.

"I didn't know he was a fighter, but he was so angry and frustrated. He was not an aggressive person—that was not Deshaun. I know he was running away from this fight. I know he didn't want to fight."

On his Instagram account, Deshaun changed his name to "Shauny is dead," Donavan said, and his son wrote, "You kids are going to regret this when I'm gone."

"That was his last straw," Donavan says.

On the evening of Deshaun's death, two Bend police officers came to the family's apartment and spoke to Deshaun outside the apartment. Afterward, Donavan says Deshaun retreated to his room. The same two officers returned later in the evening, according to Donavan, after Deshaun was found dead in his room.

Donavan says his son's problems started when he was a student at Pilot Butte Middle School, as he was "trying to be popular and trying to fit in." He fell in with some kids who were experimenting with smoking cigarettes, Donavan says.

In the family's two-bedroom apartment, older brother Jerron still sleeps in the room in which Deshaun took his life. Donavan says, "I don't like being in this apartment anymore. There are a lot of memories—good ones and bad ones. There's a lot in this apartment that I just want to get away from."

"Some days you wake up crying and some nights you go to bed crying," Nora says. "And then you think about it during the day and start to cry."

Donavan adds, "I was outside crying 20 minutes ago, before you got here," he tells a visitor. "The baby still asks for him," Donavan says.

"What really went on to lead up to my son's death? If another student was pressuring Deshaun, what's going to be done? I don't want to get angry, I want answers. The whole situation is just wrong. I need answers. I want to know what's going on." Three Summit High officials visited the family once in the days after Deshaun's death, but since then, Donavan says he has not heard anything from the school or from law enforcement.

"It's not like I want to blame the school or blame anybody, but they (the school) could do a little better. We want to work with them to bring more awareness to kids suffering depression. I could be a voice and talk to them. I feel that's something I want to do." And Donavan says he thinks that Summit High is a good place to start.

"I think there are kids out there feeling like my son, and we need to find them."

Richard Sitts grew up in the midwest, mostly in Kansas. After earning a journalism degree from Kansas State University, he worked in various capacities at newspapers in Kansas, New York, New Mexico, California and Colorado, before arriving in Bend several years ago. Highlights included working as a bureau reporter...
Read More about Richard Sitts