Reopening the Forest ▶ (with video)

Toilet cleaning and other services in the Deschutes National Forest have been closed—but recreationalists have still been "going." You can imagine the results.

The outside appeared closed up for a few months, but was it really? With trailheads and camping "closed" in the Deschutes National Forest during the COVID-19 outbreak and only partially being re-opened as of late, it would seem things out on the trails are even busier than normal. 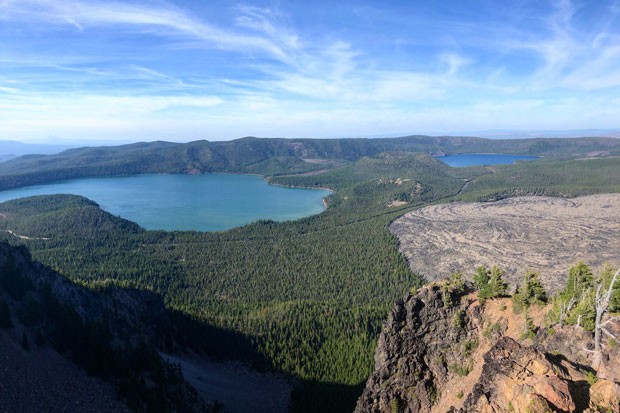 At Phil's Trail trailhead this past weekend, it became clear that the fallout of having few to no services available was beginning to add up. Toilets at the popular trailhead were overflowing; garbage was strewn about.

Currently there are no restroom or garbage services in the Deschutes National Forest, but that still isn't stopping people from recreating, which is creating another problem. Jean Nelson-Dean, the public affairs officer of the Deschutes National Forest, tells the Source that the Forest Service is having to sift through all of the madness—whether that be garbage left outside dumpsters or human waste scattered around trailhead areas.

"It's kind of a mixed bag. We've certainly seen people who have left their trash at closed dumpsters and we'll obviously be dealing with that. I wouldn't say that we're seeing more people doing it," Nelson-Dean said. "We're actively looking to restore services. We're really trying to get people to understand that their behavior can either help us or really hinder us."

The reason these damages have become issues is that DNF and other national forests haven't been offering full services; agencies haven't been fully staffed due to the stay-at-home order. Now, with things opening back up, the agency is having to play catch-up with the messes left behind. Based on what's out there right now, it seems that leaving behind waste might be normal practice for some recreators.

“We’re not keeping those places closed because we don’t want people in them, we’re keeping them closed because if there are hazard trees it could fall on people, or a car. There’s no way to escape a large falling tree. You might think you can, but you can’t.”—Jean Nelson-Dean, the Public Affairs Officer of the Deschutes National Forest tweet this

Nelson-Dean says one reason why it's so hard to police this is that for one, the DNF is huge. Trailheads may have been closed, but that doesn't mean people weren't using the trails. The limited staffing makes covering this ground even harder, she said.

"We have had actually more people than normal this time of year out recreating despite our closure. There is no way we could enforce our closures at every single location in any form. Going out and telling people to stop doing what they're doing wasn't a priority," said Nelson-Dean.

Another way Forest Service workers find themselves behind: Not all trails are ready for opening, due to the delays in getting staff back to action. Some trails in the area have been opened with limited services, but others still need work regarding hazard trees and other trail maintenance to make them safe for recreational use. Right now, making sure hikers and campers are safe is a big focus.

"We're not keeping those places closed because we don't want people in them," says Nelson-Dean. "We're keeping them closed because if there are hazard trees it could fall on people, or a car. There's no way to escape a large falling tree. You might think you can, but you can't."

Inside the DNF, the Forest Service plans to open a few fully-serviced campgrounds in the near future; some as soon as June 5. Nelson-Dean also mentions that the agency is aiming to fully open most campsites in the Newberry-Caldera area, except for the group campground, on June 15.

"We know many summer memories are made while camping outdoors. We are excited to start opening some campgrounds on the Deschutes National Forest to enjoy," stated Forest Supervisor Holly Jewkes in a press release.

If you do plan to use trails or campsites in the Deschutes National Forest, especially spots that aren't offering full services, officials remind visitors that it's important to practice proper leave-no-trace methods to the best of their ability. Among them: Don't leave trash behind, and if you need to "go," dig a hole and bury your waste 6 to 8 inches deep, and at least 200 feet from any water sources.