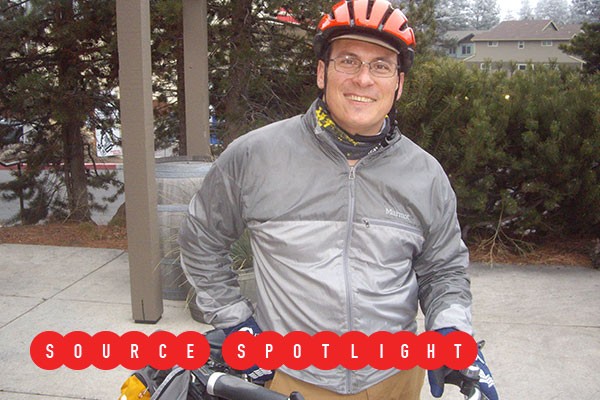 Lucas Freeman showed up on his commuter bike for our interview. I suspected he might.

As a co-founder and past president of the local nonprofit, Bend Bikes, he not only talks the talk, but he rides the rides.

"We're an advocacy group for people who commute by bike every day. We welcome everybody and anybody who is interested in what we're trying to do," Freeman says. He also started the bike blog, bikearoundbend.com, in April 2010.

Bend Bikes' mission is two-fold. First, there's the policy side of improving bicycling through working with governing bodies at the local and state level. Second is "to promote how fun biking is, to normalize it," Freeman says, adding that this will result in more people in the bike lanes around town.

Another goal is to connect neighborhood greenways throughout Bend, to make getting around by bicycle easier and safer. The objective of "calming" or slowing down traffic fits into this. Freeman points out the example of 15th Street between Simpson and Galveston Avenues—a wide street with no stop signs proven to be a popular cut-through for car traffic. Bend Bikes and people living along the street have been actively engaged for about a year now—through petitions and online surveys—on how best to slow down that traffic, according to Freeman.

At the same time, he says, "We're not interested in pushing cars off the street. People have to get around."

Growing up in the suburbs of Los Angeles, Freeman says he wasn't an avid cyclist. After moving to Bend in 1997, he started biking around town to take his daughter to daycare when she was three. She's 14 now, and Freeman and his wife, Andrea, also have a 9-year-old son.

"When I visited Bend back in the spring of 1993, it just felt right. I watched people smile at each other as they passed on the sidewalk. I also liked the connection to the outdoors. It seemed pretty ideal to have jaw-dropping recreational opportunities right outside my door. For my wife's part, she's such a trooper and was up for the adventure of a move to a new city in a new state."

Other activities that Freeman enjoys include cross country and skate skiing, mountain and road biking, hiking, camping, backpacking and a pint with friends at a local watering hole, as well as taking the family dog, Daisy, out for long walks.

"When I visited Bend back in the spring of 1993, it just felt right. I watched people smile at each other as they passed on the sidewalk." —Lucas Freeman tweet this

Freeman's day job is working as a project manager for the software firm, Nimble Development, Inc. He says his round trip commute from home is about 9 miles, adding, "A good portion of it is on the northern end of the Deschutes River Trail, so I'm pretty lucky."

Freeman offers advice for anyone considering commuting by bicycle: "Using my bicycle to get around is a function of my choosing to live life at a bit of a slower pace. I've chosen to make time in my morning and afternoon for my commute to work. But it's a trade-off I'm willing to make because I then don't have to allocate time in my day for exercising; I've already gotten in my recommended 30 minutes of physical activity. Perhaps another key ingredient is pre-riding your commute to work on a weekend, when you're not rushed. That way you can really decide the best route based on ease of street crossing or bike lanes."

Freeman suggests dressing in layers, especially when frigid Bend mornings give way to warmer afternoons. And as for special equipment, instead of a road bike, Freeman recommends an upright, commuter-type bike for comfort, ease of making hand signals for turns and slowing down. Other considerations include fenders, a sturdy lock, front and rear lights, and "something to allow you to bring a gallon of milk home." A last thing to consider, Freeman says, is a rearview mirror. "I know they look unwieldy, but I can easily see behind me so I can safely take the lane to enter a roundabout or make a left turn.

"Having lived here for over 20 years now, I like the connections I've been able to make with people in my community. I feel like Bend still offers some of the small town feel that first attracted me here; I can still get a smile or a wave from the people I pass on the street or in a store. There are plenty of times when someone driving will make sure to let me into the lane going into a roundabout, or stop to allow me to cross NW 14th at Milwaukee. That makes Bend still feel like home to me."