Ad targets Rep. Greg Walden to get the "whole truth" in impeachment inquiry

According to reporting from HuffPost, the group, Republicans for the Rule of Law, plans to post billboards in the districts of a handful of House Republicans—including the district of Rep. Greg Walden. Walden's district encompasses all of Oregon east of the Cascades—including Bend—as well as the southern Oregon city of Medford.

The billboard is in reference to impeachment proceedings and the White House's refusal to comply with subpoenas for information related to the inquiry. The billboard reads, "What is Trump Hiding" with the tagline, "Rep. Walden, we need the whole truth." It features a photo of Trump with a finger over his mouth, as well as photos of Secretary of State Mike Pompeo, former National Security Adviser John Bolton, acting White House Chief of Staff Mick Mulvaney and Trump’s personal lawyer Rudy Giuliani.

In a statement to HuffPost, Republicans for the Rule of Law spokesperson Chris Truax said, "President Trump has been given every opportunity to answer the charges against him. He demands friendly witnesses, yet refuses to allow his most loyal supporters to testify. He complains the proceedings are unfair, yet refuses to allow his lawyers to participate in the hearings.”

Members of the U.S. House have prepared two articles of impeachment against Trump, accusing him of abuse of power for allegedly pressuring
the Ukraine president to investigate 2020 Democratic rival Joe Biden. Trump is also accused of obstruction of Congress for refusing to comply with the investigation into the matter.

According to its website, "Republicans for the Rule of Law is a group of life-long Republicans dedicated to defending the institutions of our republic and upholding the rule of law. We are fighting to make sure that the laws apply equally to everyone, from the average citizen to the president of the United States. We believe in fidelity to the Constitution, transparency, and the
independence of prosecutors from politics." 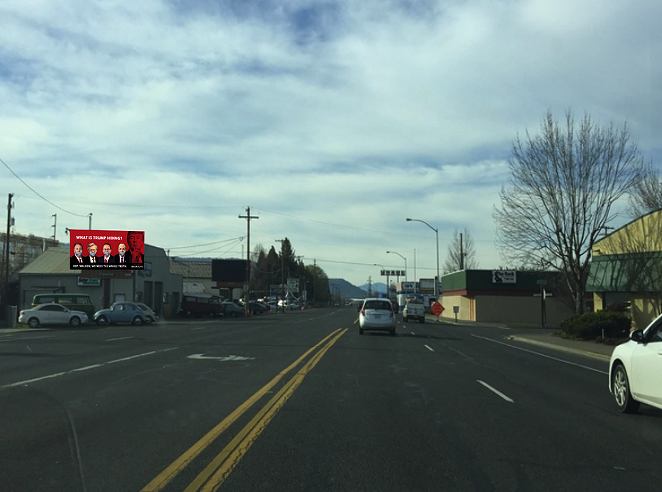 Update, 11:20 am Dec. 16: The billboard, which went live last week, is located in Medford, near 2295 Pacific Highway, according to Carson Putnam, chief of communications for Republicans for the Rule of Law. The group is also currently airing a commercial daily during the Fox & Friends show here in Walden's district, Putnam told the Source.