We visited the home of Bend's Senator, Tim Knopp, Friday. The garage door was open, but no one answered our knock.

June 21, 2019
3 comments
As of Friday, all 11 members of the Oregon Senate were still staying away from work, denying the quorum needed to pass any legislation through the state Senate. It’s the second time this session the Republicans have left their posts to deny the Democratic majority the members needed to pass any bills.

Sen. Tim Knopp (R-27)—whose district covers Bend, Redmond, Sunriver and Tumalo told Oregonian/OregonLive Thursday that his return would depend upon what bills Gov. Brown and Democratic legislative leaders schedule for consideration before the June 30 deadline for this session. 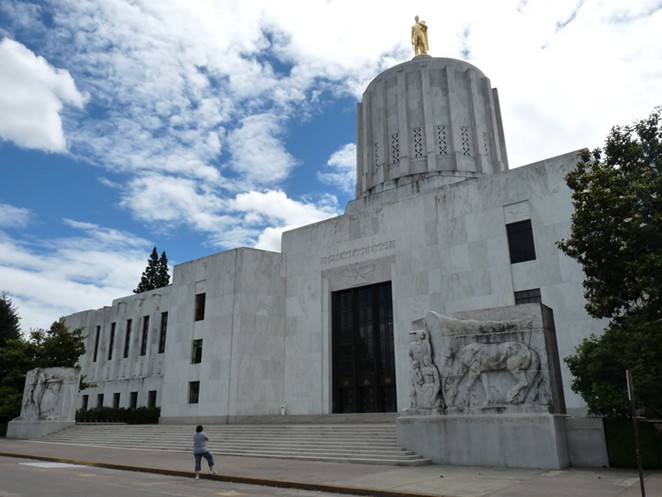 We visited Knopp’s Bend home Friday afternoon. There was a truck in the driveway and the garage door was open. However, knocking at his front door didn’t produce the Senator, or any other members of his family. tweet this


“I feel no constitutional obligation to stand around so they can pass their leftist progressive agenda for Multnomah County that my constituents don’t happen to agree with,” Knopp said to the Oregonian/Oregonlive. “I think that’s true for every other Senate district that’s out there that’s represented by Republicans.”

Although Knopp defeated his 2016 Democratic opponent, Greg Delgado, by a margin of 44,691 to 28,933, according to 2017 voter registration data from the Oregon Secretary of State’s Office, the district is fairly evenly spread across the two main parties and non-affiliated voters. The records show 32,798 registered Democrats, 30,937 Republicans and 31,636 non-affiliated voters.

We visited Knopp’s Bend home Friday afternoon. There was a truck in the driveway and the garage door was open. However, knocking at his front door didn’t produce the Senator, or any other members of his family. A request for more specific information from Knopp's office Friday elicited no response.

In a press release sent to the Source from Knopp's office June 20, he said Senate Republicans have chosen to use the last option to protect constituents by denying the Senate a quorum to pass HB 2020.

"I believe in the importance of reducing Oregon's greenhouse gas emissions," Knopp wrote. "However, HB 2020 is an expensive, inefficient and constitutionally flawed bill."

When Republicans didn’t show on the Senate floor Thursday for the 11am session, in part to vote on House Bill 2020—a massive proposal to regulate carbon emissions that Republican Senators have voiced opposition to—Senate President Peter Courtney (D-Salem) asked the sergeant at arms to search the Capitol for the missing lawmakers. When the search didn’t turn up any lawmakers, Courtney asked Gov. Brown to dispatch Oregon State Police troopers to round up the missing Republicans.

Brown quickly granted the request saying in a press release on June 20, “It is absolutely unacceptable that the Senate Republicans would turn their back on their constituents who they are honor-bound to represent here in the building. They need to return and do the jobs they were elected to do."

In 2001, Oregon House Democrats did the same walkout-and-hide routine to stop a vote on a Republican legislative redistricting bill. They stayed away for about a week, bringing House business to a halt.

Oregon’s constitution allows the majority party to “compel” the attendance of absent members of the legislature. A news release from the OSP Thursday morning said the governor has “given a lawful directive which OSP is fully committed to executing.”

Thursday afternoon, OSP issued a more detailed release, saying several Senators had been contacted and that the agency will “go to great lengths” to avoid physically arresting and handcuffing lawmakers. No physical contact is permitted, the release said, without permission from the police superintendent, according to the Oregonlive story.

Sen. Brian Boquist (R-Dallas) made a tense situation possibly worse Wednesday when he suggested that he would shoot and potentially kill any state trooper sent to bring him unwillingly back to the Capitol.

“That is what I told the superintendent,” Boquist said, in the Oregonlive article. “Send bachelors and come heavily armed. I’m not going to be a political prisoner in the state of Oregon. It’s just that simple.”

Courtney said he will call the Senate into session on a rolling basis throughout the day Friday, a practice used to “compel” Republicans to return to the floor.

Lawmakers have been told that they’ll gather for brief periods in the Senate chamber at 10 a.m. on both Saturday and Sunday. They’ve also been told to stay within one hour’s drive of the state Capitol until the situation is resolved.