As we exit "Croptober," the annual period which sees sun-grown cannabis harvested, weed education website Leafly has released a new number-filled report to help put into perspective just how valuable the plant is as an agricultural crop.

Not valuable as in, "Without cannabis, some people jumping on my last nerves in this office would be catching hands on the regular," although that certainly has value to said nerve jumpers. Rather, the report seeks to fill in the vast knowledge gaps that remain in trying to determine financial specifics surrounding cannabis as a plant that is grown by hundreds of thousands of people for a regulated, taxed marketplace. 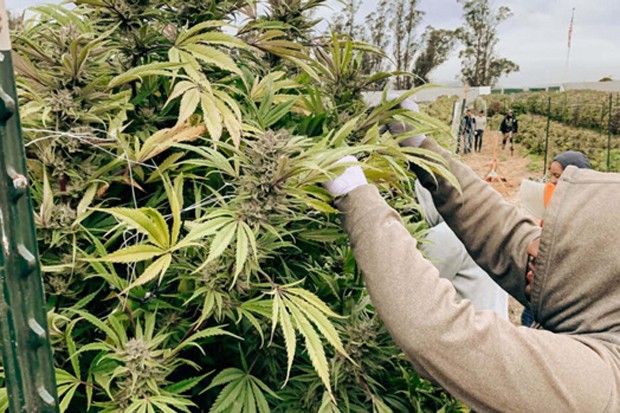 "But isn't that the job of big gubbermint?" you may ask.

Well, yes and no. While states with both medical and recreational/adult use cannabis programs have licensing agencies that track how many licenses, worker permits and dispensaries are active, along with the tally of revenue from permit fees and taxes collected, the Feds do not.

Seeing as cannabis remains a plant, you might think an agency such as the United States Department of Agriculture would have a role in tracking its value, as it does with other plants farmed for sale to the public, such as oats, wheat, soybeans and the like.

But because cannabis remains as a Schedule 1 "drug" aka The Devil's Lettuce, the USDA is forbidden from partaking...in data gathering. While economists for the agency can regale you for hours with fascinating tidbits on the metrics surrounding peanut crops, they have nothing to share about cannabis.

So Leafly partnered with Whitney Economics for the 2021 Cannabis Harvest Report. Medical cannabis is available in 37 states, but the study chose to focus solely on the 11 states with an Adult Use (recreational) Program: Alaska, Arizona, California, Colorado, Illinois, Maine, Massachusetts, Michigan, Nevada, Oregon and Washington.

Let's dive in, because soybean enthusiasts shouldn't be the only ones to geek out on numbers.

In a shock to absolutely no one, cannabis is big business. How big though?

There are 13,042 cultivation licenses between those 11 states, with Oregon having 1,319. The Golden State seems to be setting itself up as the Glutted State, with California having a whopping 7,548 cultivation licenses. That translates to an estimated seven licenses for every licensed dispensary. Our neighbor to the north, Washington, has 1,091 licenses.

Those licenses are producing a staggering amount of cannabis: a combined 2,278 metric tons. Oregon came in thirrd, accounting for 344 metric tons (damn, y'all are hiiiiiiigh), behind #2 California (514 metric tons), and #1 Colorado (627 metric tons). Washington weighed in with 254 metric tons.

Oregon's 344 metric tons had an annual wholesale value of $602 million. Washington's value was $653 million, and California was the winner with a value of $1.66 billion.

The difference in California's population (39.4 million) and Colorado's (5.7 million) and the amount of cannabis produced speaks to the difference a mature Adult Use market makes. Legalized in 2012, Colorado has worked diligently to develop its regulated cannabis program, and as the report notes, "the legal cannabis industry in Colorado is now satisfying more than 80% of total in-state demand." California is three years into its Adult-Use market and is still struggling with issues such as "dispensary deserts," high taxes and unregulated growers and dispensaries.

As the report looks only at legal recreational cannabis production and sales, excluding medical and illicit unregulated operations and sales, the combined true value of the industry is far higher than these numbers. Yet access to banking remains elusive, the 280E Tax Code imparts punitive tax rates and a lack of deductions, crop insurance is non-existent, and cannabis remains a federally illegal crop. Removing those barriers benefits growers, sellers and consumers, and remains the goal.