Rescuing Animals Out of the Ashes

Behind the scenes with Central Oregon's Pet Evacuation Team, which cared for dozens of pets from the recent fire zones

As the recent Oregon megafires ripped through the forests and towns east of the Santiam Pass and along the McKenzie River, some frantic evacuees barely escaped with their lives. Many were unprepared to leave immediately, awakened in the middle of the night by emergency response officials ordering them out. Some didn't have time to prepare their animals for transport.

After the worst of the fire danger passed, members from the group Cascades Livestock Rescue entered the burn zones west of the Cascades and left with all the domesticated animals it could find, delivering 83 cats, dogs, birds, sheep, horses, geese, pigs and ducks to the Deschutes County Fairground & Expo Center.

PET was founded 20 years ago and established a relationship early on with Deschutes County Emergency Management, as well as a vast network of public and private organizations that collaborate in times of emergency, Sheerer said. Its reputation as a respected animal rescue group helped it solicit a wide range of donations during the recent fires—including dog food, crates and beds. Oregon Feed and Irrigation in Redmond helped support the animals at the fairgrounds with food, along with shavings and heat lamps for the stalls.

As pets and livestock kept arriving in the days following the fires, PET was not only responsible for caring for these animals, but also connecting them with their owners.

"We had tickets for people who said, 'I left my horse behind,'" Sheerer said. "One woman from Vida... all she took was her dog. She thought all her animals had perished. But Cascade Livestock Rescue brought most of them out alive. Now we have to find temporary homes for them."

Because the majority of evacuees lost their homes in the fires, PET volunteers searched for farms throughout Central Oregon willing to offer foster care or adoption.

"There was a period of 48 hours there where my phone was ringing every two minutes," Sheerer said. She spent most of her waking hours at the fairgrounds or on the phone for nine days.

“I don’t think the average pet owner in Bend, Oregon is prepared… Once a fire starts, the fire fighters might not let you back into the area.”—Vikki Sheerer tweet this

The group also coordinated with veterinarians from Riverside Animal Hospital who volunteered to set up a pet hospital at the fairgrounds.

PET is recognized as a model for animal rescue and emergency preparedness throughout the rest of the state, Sheerer said.

"I don't think the average pet owner in Bend, Oregon, is prepared," Sheerer said. "We want you to have a crate for your dog... Copies of your vet records, two-week's worth of food, and water from your house. Your pet might not drink 'foreign' water. If you arrive at an evacuation center with 80 or so people with dogs, you'll be happy to have the crate with you. Also, have a picture of your dog fastened to the crate, or even better, a picture of you with your dog. And notify your neighbor where all of this is. Once a fire starts, the firefighters might not let you back into the area." 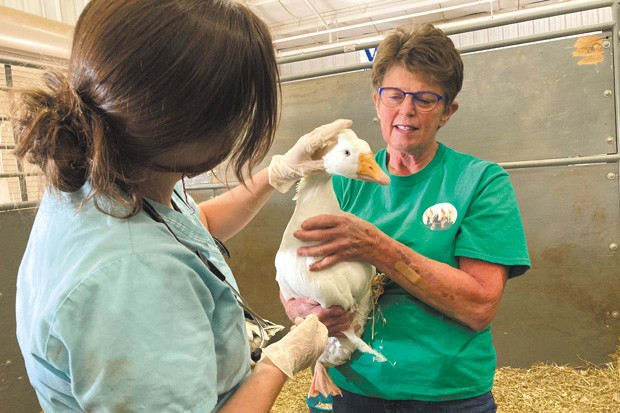 Sheerer said that out of 125 PET volunteers, around 40 are very active. Volunteers are required to participate in a three-day training. The most ambitious enroll in a Technical Large Animal Emergency Rescue course, offered in Central Oregon at least once a year by the organization Mustangs to the Rescue. MR is led by Kate Beardsley, who also volunteers with PET and worked as coordinator during the most recent fires.

"I recommend that every community has at least one person who has taken this course, in order to expand awareness of how to interact with the large animal community in emergency situations," Beardsley said.

Over the years, the course has attracted people from all over the U.S. ranging from veterinarians, sheriff's deputies, fire department employees, to forest service workers and large animal owners.

Beardsley works with horses during fire season for the U.S. Forest Service, packing in equipment and supplies for firefighters who work on the frontlines and can't be reached by motor vehicle.

She said that during the height of an emergency—like the fires in Oregon—it's common for some chaos to ensue, and even inexperienced people to try to do whatever they can to help.

"But I want to see organizations work together and invest in their own education," Beardsley said. "It's not cool for people to self-deploy on a rescue. It puts everyone in danger."

She said she plans to offer the next large animal rescue class in January or February.