It's amazing to me that right now we're living in a time where a movie like "Ma Rainey's Black Bottom" can unceremoniously get dropped on Netflix, stay in the top 10 for a week or two and then get shuffled into a back catalogue where only the most industrious of surfers will discover it. In a different year, "Ma Rainey" would probably become #1 at the box office and etch itself into the zeitgeist in a way that Netflix's movies really haven't. The shows? Sure. The movies? Not so much.

Don't get me wrong; when awards season comes around, this movie will be nominated for just about everything: the granular cinematography by Tobias A. Schliessler, the haunting production design by Mark Ricker, Ann Roth's breathtaking costumes or Branford Marsalis' powerful score. On the technical side of things, this deserves to win everything, but I guarantee most of the focus will be on the performances. 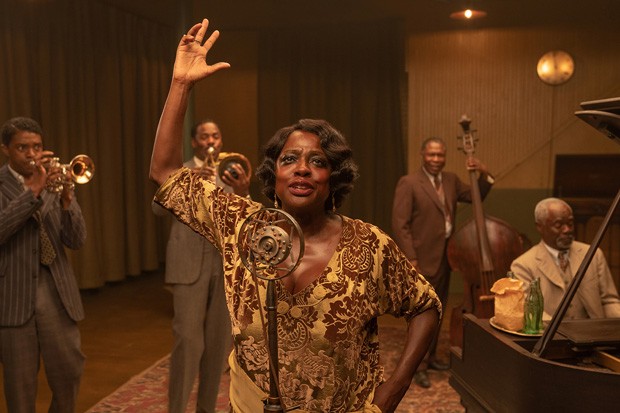 The supporting performances by Colman Domingo and Glynn Turman are fantastic and full-bodied, lending all available gravitas to the two central pieces of the entire film: Viola Davis as the force of nature Ma Rainey and Chadwick Boseman in his final performance as the ambitious trumpet player Levee. Their work here is legendary and solidifies Boseman's legacy as an exceptionally powerful artist.

Based on two-time-Pulitzer-Prize-winner August Wilson's play, "Ma Rainey's Black Bottom" is a slow-burn chamber piece following a group of blues musicians across an afternoon at a 1920s Chicago recording studio. The musicians all await the singer Ma Rainey (a real-life giant of the blues) as tensions simmer, barely veiled racism is unfurled and lifetimes of pain are unleashed.

Viola Davis disappears into Ma Rainey in a vanity-free performance built from the outside in. Drenched in sweat, covered with smeared make-up and silver teeth shining, Ma is a force of nature, just as likely to snarl as she is to laugh. Davis imbues Ma with such palpable living and breathing humanity that we can see her becoming a legend in real time.

But Boseman, man, he does something else here completely. He channels the ghosts of long-dead and forgotten session musicians of the 1920s. The timbre of his voice, the physicality in which he slinks and stalks around the room and the depth of his soul he shows in this film solidify not just his legacy as an actor gone way before his time, but as a timeless artist forever immortal in our popular consciousness. He has blistering monologues throughout the entire film and knowing that he was on that set, literally giving the performance of his life while dying of colorectal cancer is humbling and heartbreaking.

In Ma Rainey's lightning-fast 94 minutes, Wilson covers racism, sexism, ableism and just about everything else under the sun while setting the entire piece just across two rooms. People may complain that the film just feels like a play, but to them I offer a gentle pat on the head and a sad smile. It does feel like a play. So does that Disney+ version of "Hamilton" everyone was losing it over earlier this year, because it was. If turning a play or a book into a movie gets more eyes on an important piece of culture, then so be it. If it gets more people to pick up a book or go to the theater, then what are we really complaining about here?

Denzel Washington has the rights to all 10 of August Wilson's "Century Cycle," of which this and 2016's unsung masterpiece "Fences" are a part. If Washington can produce all 10, then we'll have something very important on our hands and a way to share Wilson's work with many new generations to come. Let's hope something other than Netflix eventually exists to see them on.