El Sancho: Rise from the cart

It's not fine dining like some of our past Restaurant of the Year choices, but we're guessing just the mention of El Sancho is making you descend into daydreams about barbacoa, Oaxacan cheese and pineapple serrano margaritas.

Our restaurant of the year for 2019 is a Bend-style success story, many years in the making. 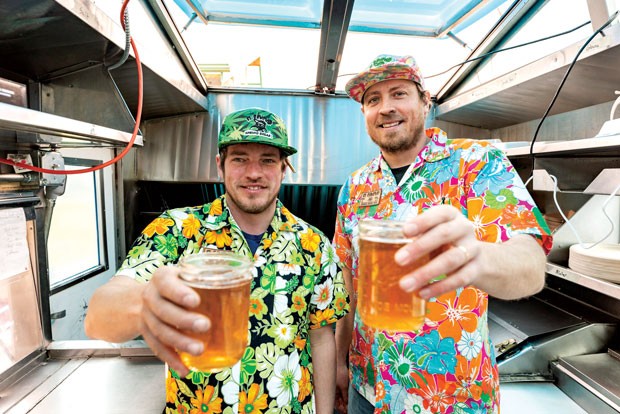 Joel Cordes started the first El Sancho as a taco food cart downtown, near The Blacksmith, in 2010. When he took a hiatus to make bagels at Rockin' Dave's, he met his soon-to-be partner, Jon Barvels. They worked at a few restaurants together, including Spork and Crux Fermentation Project, and when Cordes turned the El Sancho cart into a taco shack at the home-improvement resale yard, Pakit Liquidators, he and Barvels became partners.

Cordes is a Bend native who's worked in restaurants his entire adult life. While in culinary school in Vail, Colo., he did an independent study on Mexican food for his final, traveling to Mexico to study the food. He then moved to Seattle and worked at a few restaurants before moving back to Bend. Cordes said, "I always wanted to do a food cart. I was working at Blacksmith before I opened El Sancho. Basically, I got burned out and said, 'I'm going to open a food cart and work for myself.'"

Barvels got into the restaurant business in Minnesota when he was in college, getting a business degree. He bartended and barbecued but decided he wanted to move to the West Coast, specifically Portland, to get into the beer industry. He never found a good fit in beer and kept going back to restaurants, working front-of-house for six years, eventually moving to Bend and getting into the kitchen to learn more. Barvels talked often with his wife, Beth, about what business they could start together. When they met Cordes they thought they could help make El Sancho bigger.

Using recycled materials to build their carts was already part of their business philosophy, but it made the taco shack fit in perfectly at the Pakit yard. But not long after their move-in, Pakit closed. The Sancho team tried staying for six months, but eventually left their junkyard oasis for the lawn alongside Crux Fermentation Project. At the brewery, business picked up. "We opened the restaurant because we needed a prep space for the food cart," said Cordes. "We thought we'd find a space, open it and hopefully pay the rent. We didn't really think of turning it into what it is."

The brick-and-mortar Taco Shop location on Dekalb Avenue came with Mexican heritage: it was previously El Burrito and Rose's Cocina. While the new El Sancho restaurant was under construction, Cordes and Barvels met Carmen Garcia, a cook who had worked in the building since 1992. 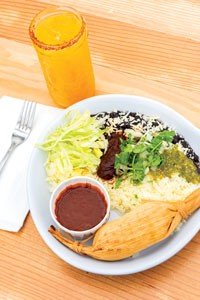 Today, Garcia is Sancho's main prep cook. Barvels said, "She's our top dog, an amazing cook. She's just brought her own thing into it—she's from Mexico, in Veracruz." At the food cart El Sancho was simply tacos and sides, but with Garcia at the restaurant, the menu has expanded, Most of the specials are Garcia's.

"She's shaped our menu almost as much as we have," said Cordes.

Meanwhile, a rocket stove is the backbone behind the food. "Rocket stoves make us able to do what we do," said Cordes. "They are designed for third-world countries, orphanages and schools. It's a big 25-gallon kettle that's wood fired. It's the most efficient wood burning stove on the planet." The rocket stove allows cooking in huge batches over high heat, the exact combination needed for El Sancho's style of meat.

Cordes and Barvels believe they're the first restaurant in North America using this type of stove on a day-to-day basis, and they couldn't run their business without it. Their rocket stove was made by InStove, soon to be Institutional Energy Solutions, in Cottage Grove, Ore., a company supplying stoves all over the world. Each year El Sancho donates a stove, giving an aid organization the means to cook food while reducing their demand for fuel.

Cordes and Barvels were excited their humble street food won them best restaurant—and considering the lines patrons encounter at both the carts and the restaurant—Central Oregonians love that humble vibe, too. 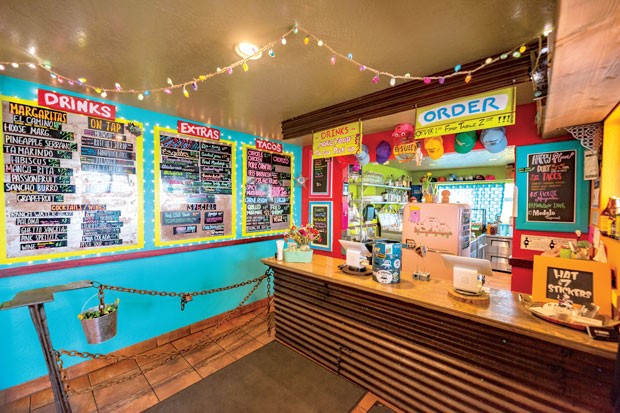 Throughout their growth, El Sancho has stayed true to its roots, using recycled materials to maintain that funky street vibe at their carts and restaurant, opting for an alternative stove and recognizing the culture they've created is reflected in their food.

"Our staff is awesome," said Barvels. "They're focused and they want it to be the best. We can take a lot of credit but as far as the day-to-day, everything that gets done the staff takes pride in it."