Return of the Space Wizards 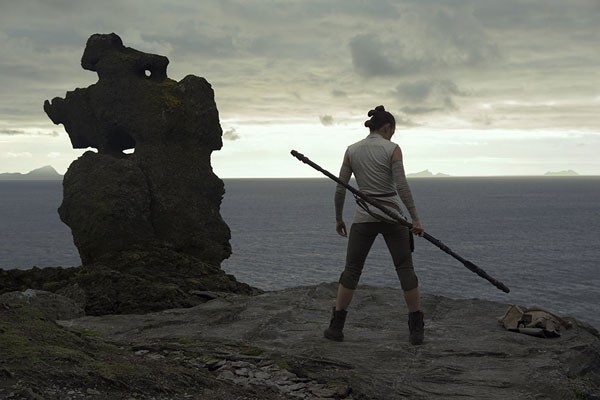 Audiences are going to hate "The Last Jedi" because of "The Force Awakens." Even though "TFA" gave us interesting new characters including Rey, Finn, Poe, it was still designed specifically (and expertly) around capturing an audience's nostalgia. The story for "TFA" was so similar to "A New Hope" that it almost plays a remake. Even the big evil thing they have to destroy at the end is just a differently branded Death Star.

"The Force Awakens" was fun in the way the prequels weren't. The film was not only showing us the future of beloved characters such as Han Solo and Princess (now General) but also wasn't centered around a turgid romance like "Attack of the Clones." If the prequels were a paint-by-numbers drawing and "The Force Awakens" was neon stencil art, then "The Last Jedi" is a Jackson Pollack with blood mixed in with the paint.

If "The Force Awakens" was really the story of Han Solo trying to be a good father then "The Last Jedi" is about Luke Skywalker's attempts to be the kind of Jedi the world needs. —JARED RASIC tweet this

Writer/Director Rian Johnson (responsible for the classics "Brick" and "Looper") doesn't care what fans imagine a Star Wars movie is supposed to look or feel like. There are still cute new creatures including the , and some goofy humor aimed at children, but "The Last Jedi" continues the story of "The Force Awakens" in ways that completely defy convention.

I went into the film blind and won't ruin that experience for anyone because having no clue where the story was going made the movie an emotionally draining cinematic experience. The only thing I'll say is that if "The Force Awakens" was really the story of Han Solo trying to be a good father then "The Last Jedi" is about Luke Skywalker's attempts to be the kind of Jedi the world needs. Rey is still the center of the new trilogy, but the importance of the Jedi comes into focus in a way that we haven't seen since "Empire."

That's another thing that makes "The Last Jedi" a remarkable piece of pop culture: it expands the universe of "Star Wars" in a way we haven't seen since the 1980s. The filmmakers aren't interested in showing us corners of this galaxy that we've seen before; instead, we're treated to a story that's completely character-based, where their emotions lead the plot into areas completely unpredictable and possibly controversial.

A film series about space wizards with laser swords shouldn't have me this emotional, but I was so caught off guard by the story that I felt like I was rediscovering my love for "Star Wars" all over again. This is the movie that was promised by "The Empire Strikes Back." It's a dynamite piece of populist entertainment that never condescends to its audience and takes these characters and this world seriously.

"The Last Jedi" might be hated by general audiences looking for nostalgia, and little kids expecting Ewoks will think it's boring and wonder why everyone is talking so much and crying all the time. There's a depth and thematic weight to this movie that we haven't seen in a giant mega-budget franchise in a very long time—and that's not necessarily a crowd-pleasing experience. It might not be the Star Wars movie we've been expecting for the last couple of years, but, finally, it's the one we deserve.