Return of the Vaux's Swifts

The Vaux's (rhymes with foxes) swift is a 4½-inch long, fast-moving bird (it's a swift after all) that resembles "a cigar with wings." The smallest of all North American swifts, these aerial acrobats put on a nightly show during their annual migrations through downtown Bend.

From their winter range which is the tropics of Mexico south to Venezuela, these 4-ounce birds undertake a Herculean migration flying to their breeding grounds in the Northwest (central California to southeast Alaska). Bendites and visitors may bear witness to this passage and enjoy watching these whirlwinds of wings as they circle round a downtown chimney atop the Boys & Girls Club at 500 NW Wall Street before descending in a controlled chaos into the darkness below. 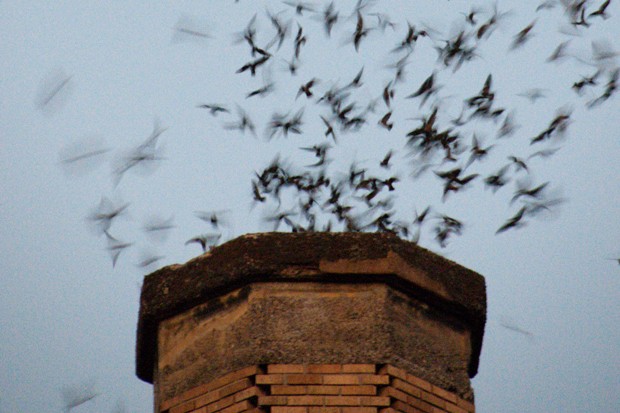 From mid-April to mid-June, stalwart volunteer counters Mary Ann Kruse and Bob Johnson spend their evenings recording the number of birds that drop into the chimney or the one atop the Library Administrative Building at 507 NW Wall Street. Their counts are part of a larger National Audubon Society's swift count called the Vaux's Happening project which the local East Cascades Audubon Society chapter also supports.

"The goal of the swift counts is to raise interest in the species which should result in our species caring about them and protecting their roosts," said Larry Schwitters, Vaux's Happening project coordinator. Schwitters compiles observation data from over 150 sites in North America during the spring (northbound) and fall (southbound) migrations.

Standing and scanning the sky from the B&GC's parking area, Kruse and Johnson patiently answer questions from newbie viewers or engage in speculative discussions about the migratory patterns of these birds, about which some things are known but many questions remain unanswered. As Johnson puts it, "the birds are predictably unpredictable."

The two volunteers spend over 50 nights a season counting as the birds drop into the brick chimney around sunset. Sounds easy when it's ones or twos, but becomes a challenge when groups of 10, 20 or 50 birds begin to descend in rapid succession.

What's in the name?

The Swift family or Apodidae means "without feet." Though the birds have small claws, their spindly legs are barely strong enough to raise the bird up off the ground. These birds forage "on the wing" snagging insects as they dip and dart across the sky, so strong legs are an evolutionary moot point.


The common name honors William S. Vaux, a 19th century mineralogist and member of the National Academy of Sciences in Philadelphia, whom John Kirk Townsend named the species after. For trivia fans: a flock is called "a box of swifts" and in this case, boxes of Vaux's.

“It isn’t just birding. It’s more than that—the quiet at dusk, the colors and clouds of the sky at sunset, the “screaming frenzy” of many or few tiny birds converging for the night as they tornado into the chimney. It’s a religious experience.”—Mary Ann Kruse tweet this

The importance of chimneys and old trees

Vaux's swifts historically roosted and nested in hollow out old-growth trees. These snags have eventually fallen to logging, firewood harvesting, wildfires, disease, high winds and other causes. The brick-lined chimneys with bits of overflowing mortar on the inside provide an acceptable alternative roost which mimics the old trees. Though birds probably continue to roost in snags in the forest, the urban chimneys are a convenient location for swift watchers to view and count the birds.


Schwitters points out that about a dozen sites with large chimneys shelter about 90% of the total number of migrating birds. "One roost site in one night can shelter 25% of the total world's population of migratory Vaux's swifts. The chimneys are critical for the species' conservation." Newer, metal lined chimneys are too slick for the birds to get a grip.

Another concern is that old growth snags are the Rodney Dangerfields of the forest: "They don't get no respect." Often perceived as hazard trees or harbingers for disease, these standing dead trees are removed but are critical for numerous species of wildlife including cavity nesting woodpeckers, bluebirds, swallows, certain owl species, and of course, swifts. Preservation of these important habitat trees, as well as the protection of brick-lined chimneys, plays a key role in the conservation of the species.

For Kruse, watching the nightly parade of swifts takes on a deeper meaning than just a number. "It isn't just birding. It's more than that—the quiet at dusk, the colors and clouds of the sky at sunset, the 'screaming frenzy' of many or few tiny birds converging for the night as they tornado into the chimney. It's a religious experience."

To view the birds, head down to the B&GC on NW Wall and pick a spot with a clear view of the chimney. Arrive shortly before sunset, although some nights the birds may enter the chimney early. Try your hand at counting and compare numbers with Kruse and Johnson after the last bird has dipped inside for the night.