I'm coming in hot to 2021 with a fat stack of movies I expected to see in a theater last year that are instead slowly and without fanfare being dribbled out to Video on Demand and streaming services. The irony is that with the brand-new VoD releases, the studios are trying to recoup as much money as they possibly can, so the rental price is $20...more than a movie ticket would actually end up being.

But I've been fairly desperate to see "Promising Young Woman" ever since it was removed from its release date in April of last year, when movie theaters around the globe closed their doors. I would have been at the theater opening night to see it, so I figure $20 to rent a film I really wanted to see feels like directly supporting the movie in a way the theatrical experience doesn't really cover. 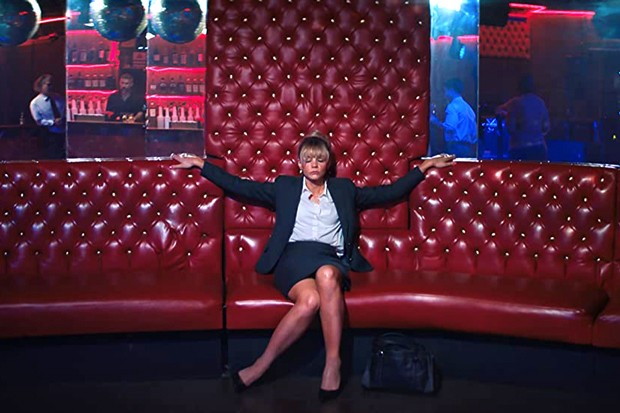 Without question, "Promising Young Woman" is worth the steep rental fee. The film is complicated and ugly and uncompromising, leaving me staring at my screen with a sick, empty hole in my stomach. It's hard to even write about this movie because I'm not sure I even know how to articulate my feelings properly without either being too vague or too specific about a film that ultimately exists as one giant trigger warning.

Carey Mulligan gives her most nuanced performance yet as Cassie, a 30-something that, years earlier, dropped out of med school with her lifelong friend Nina after Nina was raped at a party. Cassie dropped out to take care of Nina, and it's implied that eventually Nina took her own life. Now Cassie lives with her parents, works at a coffee shop and spends her nights in bars, pretending to be drunk so she can tangle with any would-be rapists who cross her path.

Cassie feels like she wasn't able to help Nina. Now she feigns helplessness so that when men try to take advantage of her in her fake-drunken state, she scares them into seeing their predatory and evil behavior. Cassie is trying to make the world safer for women, literally one man at a time.

"Promising Young Woman" completely subverts the rape/revenge genre of thrillers with a final act that is as subversive as it is jaw-dropping. I'm still not sure if I think the ending of the film is a fearless act of provocation by writer/director Emerald Fennell or a shark-jumping moment so miscalculated it throws into question the entire point of the movie. Without wading into spoilers, all I will say is that if something can be bleak and cathartic at the same time, "Promising Young Woman" goes for it with extremely confusing results.

Even though I'm genuinely struggling to understand how I feel about this movie, I'm very glad I rented it. It left me feeling a lot. Ultimately, I want every movie I watch to make me feel something, whether it's positive or negative. Or, as "Promising Young Woman" proved was possible, some emotion in between.