Sipping a unique mixed-culture beer at The Commons

On my recent trip to The Commons, I drank Ferme Rouge on tap, from Little Beast Brewing out of Beaverton, Oregon. It was a delight. The Commons (known until earlier this year as Crow's Feet Commons) is a great place to hang out during any season, and the beer selection is eclectic and high quality, both on tap and in bottles. The location, just down from what locals call The Breezeway, is fantastic for relaxation and people watching. Grab a beer and sit on the back porch during the summer, and you're sure to see paddle boarders and kayakers on the river and dogs hanging out. You might even catch some of the space's live music. 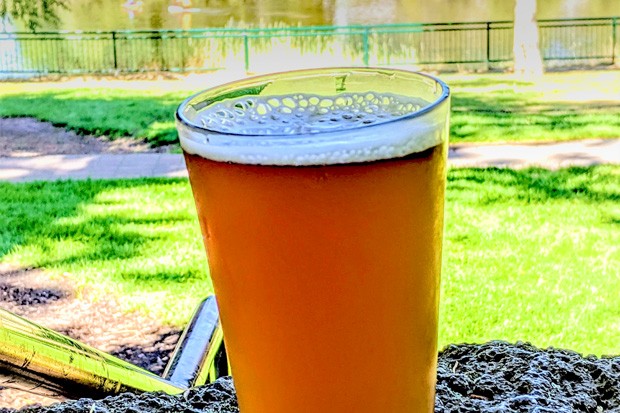 Little Beast also has a tasting room, called the Beer Garden, in Portland. Head Brewer and co-owner Charles Porter opened the brewery after leaving Logsdon Farmhouse Ales in Washougal, Washington. Having judged beer alongside him, I am in awe of his palate, and his beers prove this point. His passion for mixed-culture beers is very evident. A mixed-culture beer, also called "mixed fermentation," is brewed with a variety of both wild yeasts, standard brewing yeast and varietals of bacteria along with other unconventional brewing ingredients. A local place doing this is The Ale Apothecary.

Ferme Rouge is one of Little Beast's flagship beers, a mixed-culture farmhouse red ale. On tap, this beer is lightly carbonated with a light body, offering a higher carbonation and a creamier mouthfeel. The color is a beautiful, rich reddish amber. The aroma is subtle, with hints of maltiness—think biscuits or baking bread, and an underlying tartness.

Ferme Rouge is soured, but in a very subtle way. The tartness is balanced well by the biscuit flavors of the malt. The perfect balance brings a complexity to the beer that's quite enjoyable. As this beer warms, those flavors open up, and the balance remains. Flavors and aromas of dark fruits begin to come forward, with that remaining backdrop of tartness. The malts are richer, slightly sweeter and the tang takes on a brighter note. Ferme Rouge is great on a warm Central Oregon day because of its bright notes and light mouthfeel.

I give this beer a solid 5 out of 5 on my drinkability scale. I don't often give a 5 for sour beers, but the subtleness of this one is sure to make just about any beer drinker happy. With an ABV of 7.5%, it's a tad higher than most of the 5-rated beers I've reviewed. You'll want to sip slowly on this beer so you can see how it changes as it warms. In addition to The Commons, you can find Ferme Rouge in bottles at places including The Brew Shop above the Platypus Pub, Broken Top Bottle Shop, Newport Avenue Market and other shops that sell selective craft beer in Central Oregon.