Despite stumbles, it's still Oregon's most widespread beer brand 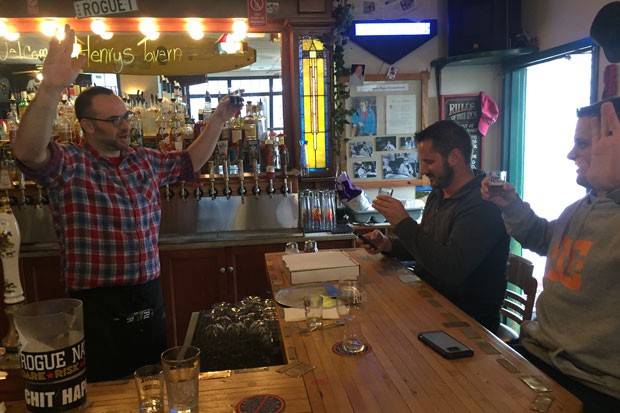 Considering that Rogue Ales produced nearly 100,000 barrels in 2017 (according to Brewers Association figures) and distributes its beer, cider, soda and distilled spirits to 50 U.S. states—and worldwide from Thailand to Norway, local Oregonian beer nerds still sometimes treat the brand as something of a joke.

Much of this is backlash from the Newport-based brewery's rash of, shall we say, "offbeat" releases in the early teens. Americans from coast to coast who've never set foot in Portland are familiar with Voodoo Doughnut, thanks to the long line of sickly-sweet beer collaborations the company released with Rogue between 2012 and 2016. People fondly (or not-so-fondly) remember 2013's Beard Beer, a wild ale made with yeast cultured from nine beard hairs belonging to Rogue brewmaster John Maier. And the less said about Sriracha Hot Stout, the better, really.

These novelty bottles made it easy to forget that Rogue is undebatably a craft-beer pioneer. It was established in Ashland in 1988; one of its co-founders, Jack Joyce, was also one of Nike's first executive hires. Brewmaster Maier came on in 1989, just in time for the company's move to Newport, and starting at the turn of the millennium, Rogue grew rapidly. Alongside brands like Stone and New Belgium, it was one of the first craft labels to go nationwide, showing people for the first time in untapped markets like the South that beer could be something besides 24-packs of PBR after all.

The brewery has been led by Jack Joyce's son Brett since 2005, and like other regional breweries around the U.S., its sales have fallen. Production peaked at 117,000 barrels in 2014, but tapered off to 98,000 three years later as thousands of smaller, locally-oriented breweries attracted customers' attention. "It's a funny spot to be in," Brett told the beer-trade publication Brewbound. "We are one of the smallest, nationally distributed independent craft breweries around, but we understand our position. We have to be outstanding in everything that we do in order to keep that position as a national brand."

Brett will be stepping down from the presidency at the end of 2018, replaced by general manager (and former AB InBev executive) Dharma Tamm, who will take on a beer lineup that's now fully done away with the Sriracha/donut gimmickry; it's now much more focused on Rogue's traditional strengths in stout and IPA, such as the Combat Wombat NEIPA with blood orange and grapefruit. Whether this approach will help solidify its reputation (and its sales) in Oregon is one story to watch in 2019.

The Source is hiring a beer writer!

As much as we hate to see him go, our beer columnist will soon be flying the coop. If you're a beer enthusiast with a way with words, email us your column ideas at bendsource.com.