Oregon lost nearly half its honey bee population from 2018 to 2019. Local honey bee experts explain the importance of doing our part to keep bees alive

After a poolside bee sting sent me into anaphylactic shock several years ago, I quickly labeled all stinging insects my mortal enemies. Since then, whenever a honey bee or yellow jacket stopped by a picnic to say "hello," I'd head for the hills, screaming at the menacing party-crasher to go back home.

But as I read up on the state of honey bees in Central Oregon and got to know some local beekeepers, my tune began to change.

After visiting Broadus Bees in southeast Bend, I grew to admire and respect the fascinating and crucial creatures I used to run from in fear. Happy, hard-working honey bees floated around peacefully, focused on protecting their queens and completing their assigned tasks. Though unconcerned with those around them, they were unwittingly and immensely contributing to our overall quality of life. It became clear that beekeeping isn't just fundamental to our environment and agriculture; it's an artform.

“The honey bee population is both vital and at risk. Bees are responsible for one-third of every bite we eat. If hives keep dying at such high rates, we’ll suffer as a result.”—Jimmy Wilkie tweet this

The bad news: the bees themselves are thriving far less than the local community of keepers. Oregon lost a shocking 48% of its bee population from 2018-19, as confirmed by the PNW Honey Bee Survey Reports. Colony collapse disorder has been widely reported, but local bee experts say that in Oregon, that massive loss has another apparent culprit.

"The honey bee population is both vital and at risk," said Jimmy Wilkie, a master beekeeper, COBKA member and owner of Broadus Bees. He explained the issues that European honey bees face, and why it's so imperative that humans do our part to keep them alive.

"Bees are responsible for one-third of every bite we eat. If hives keep dying at such high rates, we'll suffer as a result." According to the Pollinator Partnership—the world's largest nonprofit supporting the health of all pollinators—roughly one-third of our total agricultural production relies on the European honey bee. "Bees aren't just responsible for making honey," Wilkie said. "They pollinate a huge portion of our food supply. If we don't have healthy bees, we don't have healthy food." This concern is further confirmed by a 2018 U.S. Food and Drug Administration report, which states, "This agricultural benefit of honey bees is estimated to be between 10 and 20 times the total value of honey and beeswax. In fact, bee pollination accounts for about $15 billion in added crop value."

Wilkie explained that while honey bees are essential to crop pollination, they also feast on the pollen themselves. "Bees get most of their protein from pollen," he explained. "It's called 'bee bread.' They also get vitamins and minerals from the pollen they bring back to the hive. If a bee is collecting pollen from a flower that's been treated with a chemical pesticide, it can do serious harm to the bee and to the colony as a whole." He currently looks after 90 hives of Russian honey bees, which are, as he explained, an ideal variety based on their cleanliness.

"There are two groups of bees that I manage here in Bend," he said. "I've got 50 hives in one area and 40 hives in another. I breed Russian honey bees, because they've got this characteristic where they groom each other more often and pick mites off of each other. Subsequently, I have to treat them less with chemicals. This means less residual chemicals in beeswax, which is healthier for the bees and those consuming the product. I use oxalic acid, which naturally occurs in fruits and vegetables in smaller amounts. It's an organic chemical." He explained that he uses this chemical to vaporize the hive when he needs to, rather than leaving "nasty chemical strips inside the hives for months at a time." Despite Wilkie's success keeping bees alive in Central Oregon, many hobbyists and professional beekeepers have been experiencing CCD at devastating rates. 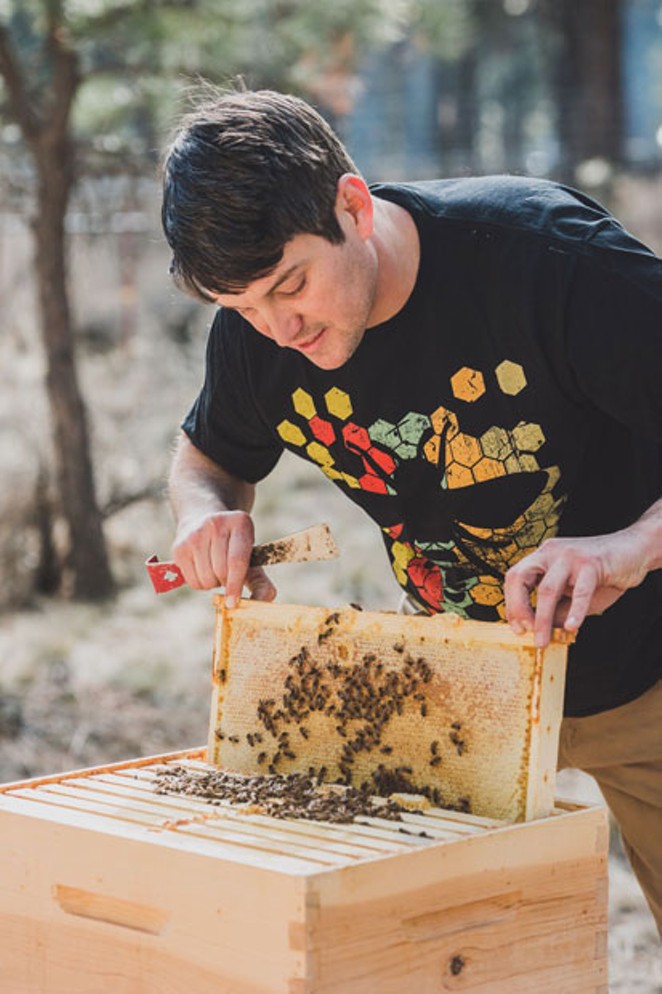 The catastrophic bee loss is backed by data from Dr. Dewey M. Caron, a retired affiliate professor in the Department of Horticulture at Oregon State University. Currently, Caron is a member of the Willamette Valley Beekeepers Association, and although retired, regularly conducts informative talks on honey bees and beekeeping. In a testimony submitted to the Oregon state legislature in 2019, Caron detailed his support for House Bill 3058, which would ban the use of chlorpyrifos, a harmful agricultural pesticide.

"I write to support passage of HB 3058 that would ban purchase and sale of the insecticide chlorpyrifos, and restrict use of neonicotinoids to trained individuals by licensing them as restricted use pesticides," he wrote. "Neonicotinoids have been found in residue studies of common foods consumed in Oregon, taken from our own outlets. I strongly urge the passage of HB 3058 to help protect the health of Oregon citizens and our environment, especially our highly vulnerable honey bee pollinator populations."

While mentioned in Caron's testimony, HB 3058 failed to address neonicotinoids, which remain the most widely used pesticide in the world. In May, the U.S. Environmental Protection Agency announced that 12 commonly used neonicotinoids would be canceled effective in 2020—four of which were deemed acutely toxic to bees (meaning that after exposure, bees died within 48-96 hours). These cancellations were part of a 2018 settlement agreement with several concerned environmental groups, according to Bloomberg Environment. As of now, chlorpyrifos remain legal to use throughout the U.S.

The spiking deaths of European honey bees isn't the only concern as far as this class of chemical pesticide goes. "It's important to understand the importance of keeping bees alive, but also of the risks involved in using pesticides in hives and on agriculture as far as human consumption goes," said Wilkie.

Oregon lawmakers debated over the proposed bill before it ultimately died alongside half of the state's honeybees. HB 3058 called upon the Oregon Department of Agriculture to take a look at the safety of chlorpyrifos, an insecticide that has been scientifically confirmed to cause health problems in exposed children. In 2015, the Obama administration agreed to ban the pesticide after studies confirmed that it caused lowered IQ and cognitive function in developing children (illustrated by many studies, including an in-depth examination conducted by the National Center for Biotechnology Information in 2012). The pesticide was first patented in 1966, and is currently a registered treatment for nearly 50 crops throughout Oregon—many of which are pollinated by bees. In 2017, the Trump Administration overturned this decision, prompting public outcry and a lawsuit challenging the U.S. EPA. Oregon Attorney General Ellen Rosenblum joined the lawsuit in 2019.

For now, despite apparent risks, chlorpyrifos use will be "studied" until 2022, when its safety will be reevaluated in court.

Agricultural pesticides can harm bees, kill colonies and contaminate beeswax and honey, leading to serious health concerns. However, some pesticides are necessary in the survival of bees, and making this distinction will help prevent extinction. Interestingly enough, the majority of the state's recent bee loss is attributed to the invasive Varroa mite, not to the overturned House bill.

Terry Holm, a journeyman-level beekeeper in Stayton, Oregon, and graduate of the Apprentice Beekeeper program at Oregon State University, explained the importance of treating hives infected with mites naturally, and avoiding dangerous pesticides whenever possible. "Oregon lost almost half of its bees last year, mostly because people don't know how to treat Varroa mites and the diseases they cause," Holm informed. "Varroa mites cause the biggest percentage of hive death here in Oregon. I only treat mites with natural products; Apiguard or ApiVarLife, which are derived from thyme, or oxalic acid which is derived from rhubarb and spinach. It's important to remember to test for mites, treat the mites, and then retest to see if the treatment worked. You can't just glance at your hive and say, 'Well, I don't see mites.' If you do see mites in your hive, your hive is so over-populated that it's probably dead already." 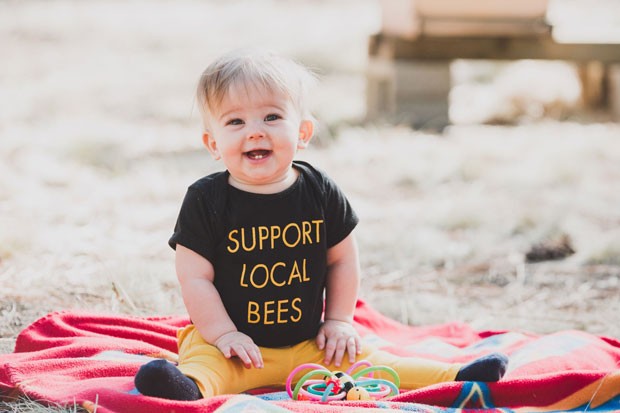 Holm explained the importance of communication when it comes to local beekeepers and their neighbors. "As far as pesticides, they can be a major danger if the directions aren't followed," she said. "If you have neighbors that spray shrubs, flowers or trees that are blooming, and your bees are attracted to them, it can be a major problem. Farmers want the pollinators, and they have to know not to spray fungicides or pesticides at the same time their crops are blooming. The problem occurs when you have a neighbor that doesn't know you have bees, or hasn't followed the directions about the right time to spray or apply the pesticide. Most people realize our pollinators are in trouble and want to help. Let everyone around you know that you have bees! Suggest planting pollinator-friendly flowers, and ask them kindly not to spray pesticides when things are in bloom. A gifted honey sample goes a long way."

Both Wilkie and Holm encourage those interested in beekeeping to explore the vital profession (or hobby, as the case may be) and get educated about the importance of keeping honey bees mite-free, pesticide-free and alive through the bitter Central Oregon winters. "Beekeeping is not a cheap hobby, but if you want to do it you have to stay on top of the mites," Holm urged. "It takes a little time and effort once a month, or every other month, to keep your hives alive. It's very similar to having any other pet or livestock, you have to have rabies shots for your dogs and treat them for fleas to keep them happy and healthy."

"Come down to the Environmental Center the third Tuesday of every month at 5pm," Wilkie added. "I lead a discussion for beginners; it's a totally judgment-free zone to ask any and all questions. We've got a couple of fun upcoming events to check out. Utilize local resources! It's a fascinating hobby, and it's an important one. If we keep local pollinators alive and increase the local pollinating population, it's only good and healthy for the environment. The more bees, the better."