How 4,700 miles of Oregon waterways got nominated for Wild and Scenic River designation

Rivers are a big economic engine that float our entire state.

During the last session of Congress, more of Oregon's rivers were given Wild and Scenic designation—meaning more protection for these precious waterways. Riding that tide, now Sen. Ron Wyden (D-OR) is going to bat to further increase protected mileage with the River Democracy Act—and he's doing it grassroots style, from the ground up. 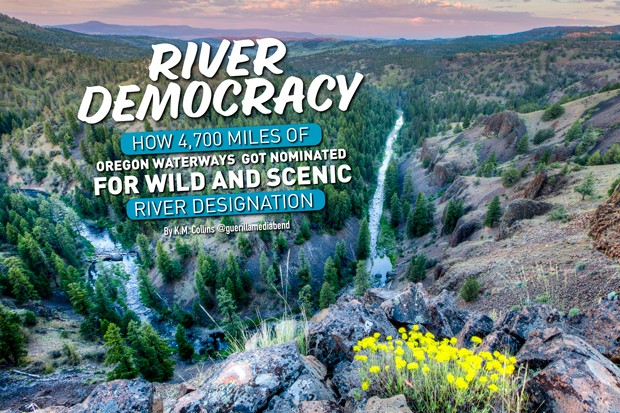 In addition to being a treasure, it's important to protect Wild and Scenic Rivers for continued access to clean drinking water and wildfire protections, Wyden says. In addition, these waterways fuel economic stimulus though recreation use and the jobs that support that recreation.

Here's what else Sen. Wyden and Jamie Dawson of Oregon Wild have to say about the proposed River Democracy Act.

Source Weekly: What are the origins of the River Democracy bill?

Ron Wyden: It was written by Oregonians. I called upon Oregonians to give me their ideas about what rivers they wanted to protect. The response was incredible, and that's how the bill got its name. It was part of our unique system of government; it was river democracy. For example, there were nominations for Tumalo Creek from a science class at the Pacific Crest Middle School in Bend, for Rough and Ready Creek from river guides in Southern Oregon, and the Umatilla River and Middle Fork of the John Day River by the Confederated Tribes of Umatilla Indian Reservation.

Jamie Dawson: I'd say the origin was when Senator Wyden wrote an open letter to Oregonians asking them to nominate new rivers and streams for protection. The support was clear: at a river-related town hall meeting in Bend in December, it was standing room only. All told, they received over 15,000 river nominations from folks across the state highlighting their drinking watersheds, their favorite places to paddle and recreate with family and streams that provide important habitat for fish and wildlife. I've met anglers, students, guides, biologists, hunters, whitewater paddlers and river lovers of all stripes who sent in nominations. This bill is truly remarkable in that way—it's not too often that regular people have the opportunity to influence legislation like this.

A Zogby poll from December showed that 87% of Oregonians support more Wild and Scenic River designations by Congress, including 75% of Republicans. I’d bet that even the folks opposed to this bill still want clean drinking water and beautiful places to swim with their families.—Jamie Dawson tweet this

SW: Supporters of this legislation agree that increasing the number of protected waterways in the state reduces catastrophic wildfire risks, improves drinking water opportunities and expands recreation access, which in turn boosts rural jobs and economies. What would opponents to this legislation say?

RW: Let's talk about the opposition. Here are the principal areas of objection: What's going to happen with this and fire? We took extraordinary steps in this bill to protect our communities from the ravages of catastrophic fires by requiring that our Forest Service and the Bureau of Land Management develop and implement wildfire and risk management and reduction plans for each corridor—to make sure river corridors are fire safety corridors. For concerns over private property rights, look at page 16, line 17 of the bill: "Nothing in this act or an amendment made by this act affects private property rights." For concerns over water rights, look at page 17, line 1 of the bill. What really helped our cause was Union County rancher Andrea Malmberg's recent testimony in favor of the legislation. Lastly, the Wild and Scenic proposal criteria specifically allows for ephemeral, intermittent streams. Of the 16,000 streams that supply public drinking water, about 57% are ephemeral, intermittent or headwater streams.

JD: A Zogby poll from December showed that 87% of Oregonians support more Wild and Scenic River designations by Congress, including 75% of Republicans. I'd bet that even the folks opposed to this bill still want clean drinking water and beautiful places to swim with their families.

SW: What riparian flora or fauna unique to Oregon do you hope will see improved habitat from the River Democracy Act?

JD: Big whitewater rivers get all the glory, but the small tributary creeks that feed into them are where the magic happens. Salmon spawn in them, elk calve near their banks, many of them are surrounded by old-growth forests and they are super important cold water sources for bigger rivers. There's a really intricate web of flora and fauna that depend on these smaller waterways, so protecting them will create a huge positive ripple effect.

SW: In a section 4 summary of the River Democracy act it states, "This section provides that federal land managers can enter into cooperative agreements with Native American Tribal governments to administer Wild and Scenic Rivers. Currently, federal land managers are only encouraged to enter into cooperative agreements with state and local governments." Why is this distinction important?

RW: I think these tribal governments deserve a seat at the table. Co-managing river segments makes sense because it ensures everyone has a voice at the table. We worked very closely with the tribes to be sure that this was a part of the balanced approach we were taking in the overall bill.

JD: All across Oregon, we're living and recreating on unceded and/or stolen lands, so tribal voices need to be at the table. 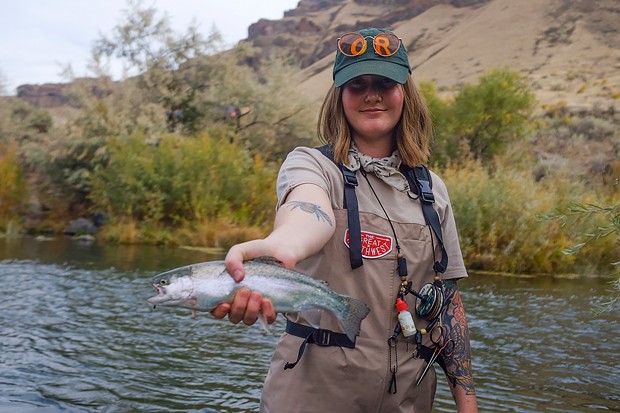 SW: What section of river are you most excited about protecting?

Hank Stern of Sen. Wyden's office: My boss often thinks fondly of his time back in law school at U of O when he and his classmates would eat blueberry pie on the McKenzie River. He's happy that more sections of the McKenzie will be protected. After witnessing the devastation of last year's wildfire season on homes and lives, he really wanted to make sure this bill provides new tools for wildfire risk reduction and forest restoration so that many Oregon rivers, like the McKenzie, can remain pristine for future generations.

JD: I have a soft spot for the Ochocos, so probably something like Deep Creek, which is a tributary to the North Fork Crooked River. The Deep Creek watershed is the best unbroken redband trout habitat in the whole Crooked River watershed, and the redband trout in the Ochocos can handle warmer-than-normal water temperatures. We're going to need their climate-hardy genes in the future, so protecting their habitat now feels like a great investment to me. And it's really beautiful, which makes it hard to beat!

SW: When will we know more about the status of the River Democracy Act? How can readers stay abreast?

RW: I am hopeful that we will pass this measure, the River Democracy Act, in this Congress. We pulled out all the stops. We had a very good first hearing. People saw how river protections help our communities in multiple ways.

JD: The River Democracy Act just had its first hearing in a Senate subcommittee, which is a really important step. I'd encourage folks to share their support by sending letters to Senator Wyden's office as well as Representative Cliff Bentz's office. Becoming a member or signing up for Oregon Wild's email list is a great way to stay on top of when there are town halls or other opportunities to engage. We're also gathering endorsements from businesses, breweries and local elected officials, so if you're one of those folks, reach out!

RW: We were amazed there was such tremendous interest on this. We made sure every part of the state would be heard. We entered all feedback into the record. We had town halls and regular public meetings. We heard from thousands of Oregonians. We are leaving the door open to hear from all sides. We've had a great cross section—it's been the Oregon way at its best.

JD: Between COVID and our recent heat wave, it's never been more clear to me how important protected public waterways are. We need more of them across the state to ensure that all Oregonians have access to these places, despite the circumstances. This bill can make that a reality, so I'm so excited to see it come to life!

In 2019, when Caitlin Houston, age 13, of Pacific Crest Middle School, learned Sen. Wyden had written an open letter to Oregonians asking them to nominate new waterways for protection, she immediately knew what her picks would be.

"I nominated the Chewaucan River as well as Tumalo Creek," Houston explains. "Tumalo Creek will always have a place in my heart since I have spent many hot summer days by its shore. The Chewaucan River is also one of the most special rivers I have been to. I love it for its natural beauty and the numerous fish I have caught in its waters." 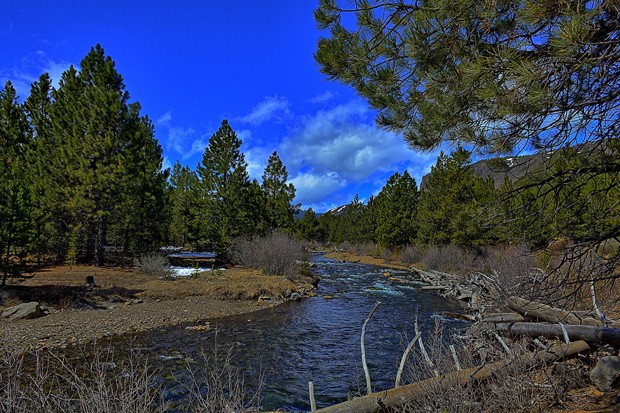 Houston cast her nominations as a stakeholder in multiple realms. A flyfisher person and rafter, she loves everything about rivers. "I love being in them and being near them. I love to see the dogwood plants as well as willows on the banks. They matter because in Bend and around the world they give us everything we love. I believe it is our duty to protect the rivers that have cherished our needs for decades. It's time to return the favor."

In nominating waterways precious to her heart, Houston feels that fish, healthy habitat and native plants will be protected. Houston wants constituents, residents, tourists, visitors and locals of all ages to remember they play an important daily role in protecting rivers, too.

"Young people can help by doing the simplest things such as picking up trash. And basically following the news and making sure the rivers around you are being treated with kindness. And speak[ing] up if they are not."

Recreate like an Oregon Local on Wild and Scenic Waterways

Although user restrictions vary from one Wild and Scenic River to the next, here are some good rules of thumb to follow if you want to be a local and blend in with the scenery.

• Pack out everything you bring, including and especially your waste

• Be mindful of conservation river etiquette and follow it

• Be polite to all inhabitants, people, animals, plants and the river itself

• Remember the people and natural systems that came before you

Parts of the Owyhee

A variety of tributaries to the North Fork Crooked River

Related Diving into Multi-Day Inflatable Paddleboarding: Spending a night—or many—with your boat, your gear and a gaggle of stars

Diving into Multi-Day Inflatable Paddleboarding
Spending a night—or many—with your boat, your gear and a gaggle of stars
By K.M. Collins
Outside Features