May 14, 2020
comment
You might remember this crew of river divers from a profile we did here at the Source in the September 2019—when our story prompted a lucky guy to get his wedding ring back. Turns out, more people are catching onto these divers' unique story—including a local filmmaker.

The "Loot The Deschutes" crew hangs on to lost belongings, working to return them through their Instagram network. Locals may have seen them at Mirror Pond, Pioneer Park or one of the many entries to the Deschutes. They're the people with wet suits and inner tubes full of trash.

Meanwhile, Rebecca Hynes, a freelance filmmaker, editor and producer, has been working in the outdoor world for years. She's worked on projects for places like Nike, KOA, Titleist and more. But as great as working on these branded spots is, Hynes has always wanted to land one of her films at MountainFilm festival. And it looks like dreams do come true.

Hynes' latest short doc, "River Looters," will show at this year's MountainFilm, which runs May 15-25. "River Looters" follows around the Bend diver collective Loot the Deschutes, the friendly neighborhood-surfers who are finding trash and treasures left underwater.

"It's been a dream of mine forever," Hynes tells the Source. "This film didn't have a dollar of funding. I had no crew."

Hynes started filming in August 2019 and finished toward the end of October. Post-production and editing took from November until January, which is where Hynes says the real film starts. With a short, it's hard to dictate what you want to tell the audience in a limited amount of time. You have to find the story you want to tell.


“You have to be ruthless about saying goodbye to footage that you love and the storylines you love.”

Hynes tells the story about messaging the group on Instagram, and going to meet up for an introduction. As she arrived, the divers were returning a women's cell phone they found in the river. Hynes saw this opportunity and walked up, rolling the camera. So before they even shook hands hands the movie had already started.


"They were like, 'You think you can really make a film out of this!?'" recalls Hynes. 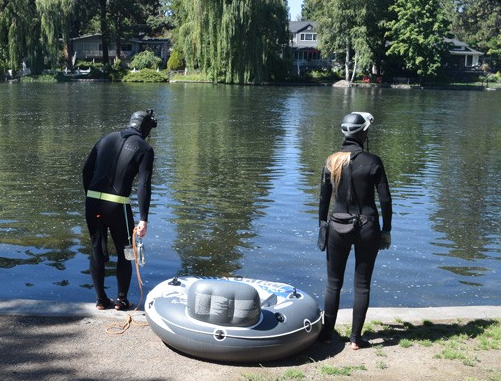 “They love being underwater. They can't get enough of it,” laughs Hynes.

"It’s really kind of funny. People might think they look dorky with their suits and goggles on, but then they hop on a surfboard and they’re the raddest, steeziest surfers down there. It's the best of both worlds."

"River Looters" is a totally independent and local film. To see it during its run at MountainFilm, people can purchase passes online. Under normal circumstances locals can see the films screening at Bend's Tower Theatre, but this year, the festival is taking a virtual approach due to COVID-19. For Hynes, she couldn't be happier to have her film in there telling a true Bend story.

"I feel like being a woman filmmaker, and helping Bend get on the map in MountainFilm is everything.”