Local trio retrieves lost items while cleaning up the Deschutes

But sometimes a simple journey can take a turn for the worse: one jutting lava rock or a low-hanging branch can quickly capsize a floater. As safety-conscious as river runners are, the same can't always be said for their personal effects: Sunglasses, cell phones, even car keys and credit cards, have all ended up lost in the murky depths of the Deschutes. 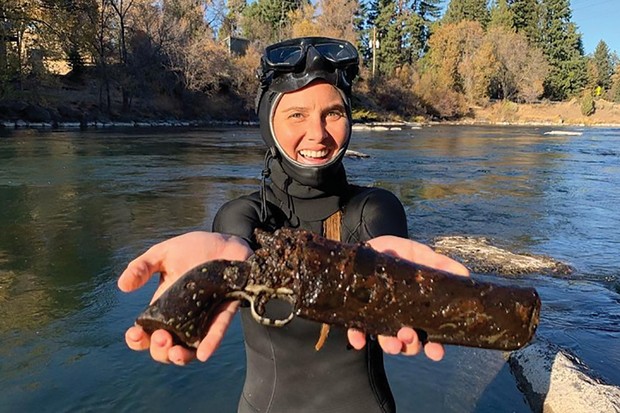 That's where three local friends, Kea Eubank, Miranda Eubank, and Lled Smith come in. They are river surfers and free divers (with snorkels and masks but no scuba tanks) who have made it their personal mission to help folks recover lost belongings from the river.

Together, they run an Instagram page called "LoottheDeschutes," whose tagline is, "The unofficial lost and found of the Deschutes River..."

"People are always dropping stuff so we're just like the vultures that are picking up what people drop and hopefully we can get it back to them," the crew explains in a 4-minute documentary posted to Vimeo called River Looters, which is linked to their IG page. "It's nice when we get people back their stuff, that's a big part of our fun."

Miranda Eubank, who is originally from Bend, met her husband, Kea Eubank, in Maui. When Maui got too crowded for them, the two surf lovers moved to Bend about 10 years ago, where they met Smith while surfing the Deschutes River wave in 2016.

“People are always like, you know, why don’t you keep it or pawn it? Just that feeling you get when you give something like that back is worth so much more.” tweet this

About three years later, they began noticing many valuable items tumbling into the water. That's when the idea to start diving for river loot was born. Sometimes they were able to return items on the spot, but soon they began collecting a verifiable treasure trove of unclaimed items. Pulling loot out of the river turned out to be easier than finding the owners.

"In the beginning, we tried to use Craigslist to return items, but that was a daunting task," Miranda explains in an interview on behalf of the crew, "Then around April 20, 2019, Lled took his Instagram skills and spun up 'Loot The Deschutes' and made the first post – a wetsuit hoodie left at the wave. (This hoodie was returned a year later!) We now have 858 posts about lost items."

A leisurely scroll through their mesmeric IG account reveals lost valuables collectively worth thousands, from designer brand shades and wrist watches to diamond-encrusted earrings and solid - gold wedding rings. It's surprising how many expensive electronics manage to be salvaged and restored to working order, thanks in part to well-sealed dry bags that miraculously survive the rapids.

The trio are like reverse pirates, however, for instead of keeping their loot, they actively work to track down owners through emergency contact lists, jewelry engravings and social media shared posts. The clarion call on their IG page invites people to share details of when and where they lost their belongings. The team then dons their wetsuits and dives into the river like local superheroes.

"This has definitely turned into quite the task!" Miranda says. "Lots of people are now contacting us to go look for their items. We find about 50% of the things requested, depending on where they are lost. Certain spots are really hard to find things! There's some sandy or grassy spots we call the Bermuda Triangle because we have a 0% find rate in those areas."

It's not just local citizens who have been reunited with their treasures, though. Out-of-town recipients send beaming selfies and letters of appreciation to the team thanking them for their work. These efforts are helping instill a reputation of community spirit in Bend.

"People are always like, you know, why don't you keep it or pawn it? Just that feeling you get when you give something like that back is worth so much more. It's really fun to meet all the people that we return the stuff to," the film explains.

Beyond price tags, other items brim with sentimental value. In River Looters, they share a story about finding a missing ring whose owner tears up on camera, sharing, "Yeah that's it! It was one of the first rings I made. I gave it to this guy who was like a father to me and he passed away like a month ago...so when I lost it, I was really sad."

In addition to treasure hunting, the three friends are committed to cleaning up all the trash that finds its way into Bend's beloved waterway. Crumpled cans, water bottles, broken glass, old bricks and rusty metal tools left over from the Old Mill's production heyday have all been retrieved like a watery time capsule, alongside other more bizarre finds like bicycle seats, license plates, headless Barbie dolls and even an old handgun. Bend is fortunate to have the cleanup crew volunteering their time to keep the river clean, as these items can pose a safety hazard, particularly to children. 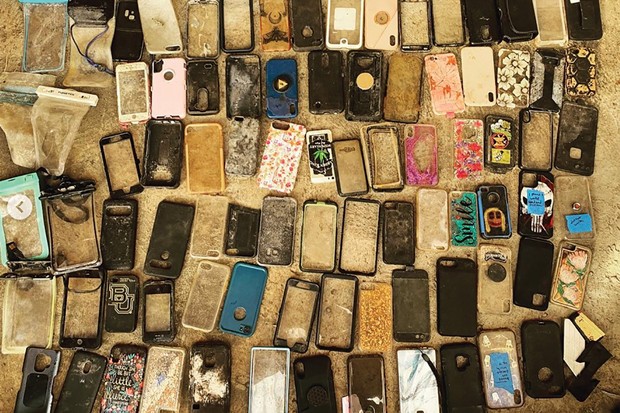 The group has also inspired local children to get involved. "What's also pretty cool, there are now people helping us out, mainly kids," Miranda says. "If they find a wedding ring or something of value they will send a pic of it and we can try and find the owner. Or we will do the reverse. Someone will contact us that they lost a ring and we will notify the other folks that are looking for things in the river."

So, the next time you float down the river, you might see the Eubanks and Smith hard at work looting the Deschutes.

Be sure to thank them for their time and ask them if they've found any good treasures lately!

For more information, check out the LoottheDeschutes IG page at instagram.com/lootthedeschutes/