A few years back—on Feb. 22, 2014, to be exact—my wife, Sue, and I were driving a Jefferson County road headed for Eagle Watch. And as it is when we're driving anywhere this time of year, we were also watching for Golden Eagles to see who's hanging around, hopefully getting ready to start nesting.

As we were going around a corner Sue suddenly twisted in her seat to look back over her shoulder, and almost shouted, "Oh look, Jim, there's a marmot!" 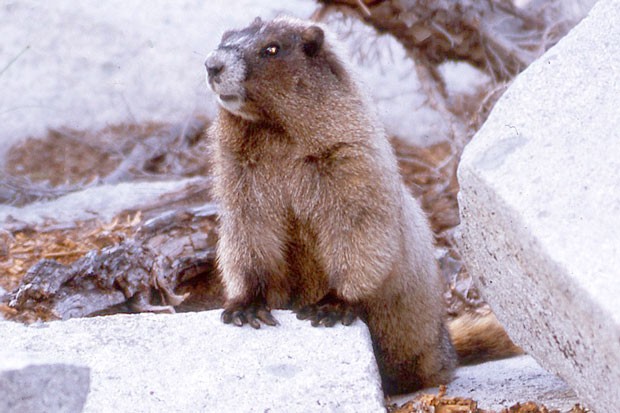 Hmm, I thought, this is pretty early for a rock chuck to be awake out sunning himself. Rock chuck is a local name for the yellow-bellied marmot. They're also close cousins of Punxsutawney Phil, that much celebrated groundhog, Marmota monad, for which Groundhog Day is celebrated.

Groundhogs, aka woodchucks or whistle-pigs, are members of the squirrel family and are found in the central and eastern United States, as well as in Canada. They're a close relative to our rock chucks.

The groundhog is one of 14 species of marmots. They live a feast-or-famine lifestyle and must gorge themselves on grasses and other vegetation all summer. The whole idea is to build up plentiful fat reserves that will get them through their hibernation in winter.

After the first frost, they retreat to underground burrows and go into a deep stupor until spring, drawing all their energy from body fat. While hibernating, the animal is close to death — breathing and heartbeat hardly noticeable, and body temperature not much warmer than the temperature inside the burrow.

The truth is, weather has nothing to with a groundhog emerging from hibernation. tweet this

As we all know, groundhog hibernation gave rise to the popular American custom of Groundhog Day, held Feb. 2 every year back east. How the merchants of Oregon let this one slip through their fingers I'll never know.

Tradition dictates that if a groundhog sees its shadow that day, there will be six more weeks of winter—though such a prediction seems a sure bet over much of the groundhog's North American range. (This year, by the way, Punxsutawney Phil predicted an early spring.)

And in case you're wondering, during hibernation the marmot's temperature drops from 99° F—when active —to 40°F, when they go into deep hibernation. That's when the animal's heartbeat slows from 80 beats per minute to five per minute; its breathing reduced from 12 breaths a minute to about four.

Now here's where all the hoopla about sunlight and shadows come to reality and proves it's nothing but a great marketing tool for getting people to come and spend money in Punxsutawney, Pennsylvania.

The truth is, weather has nothing to with a groundhog emerging from hibernation. Nature dictates they appear when the mating season begins. When it comes to male animals, it seems sex drives their world. It's also the length of day and the angle of the sun in relationship with the horizon that drives all wild animals toward reproduction, from beetles to bobolinks to bobcats and buzzards.

(I would like to have used bats instead of bobcats, but bats breed in the fall, just before going to sleep for winter. They also slow down body processes to a near-death rate in hibernation. However, the female bat stores the male's sperm until she wakes up in spring, then fertilization takes place. While mule deer moms are frantically searching for enough food to keep their growing fetuses alive, female bats are slumbering in relative comfort.)

So, how about we start a "Rock Chuck Rhapsody" when we see the first yellow-bellied marmot pop up in spring? Those talented and up-and-coming music students in all the schools could write and play original music about rodents of all kinds — from the diminutive pocket mouse, to voles, to rock chucks—and throw in the Olympic Marmot of Washington for the fun of it.

My traditional way of knowing when spring is really here is when: 1. The Spotted Towhee arrives at my bird feeder (but now they're here year-round), and, 2. The snow is gone from the Ochoco Mountains. But then, when it snows sideways in April or like it did in the '50s one time on the 4th of July, I don't know what to think.