Young musicians get a chance to live the dream 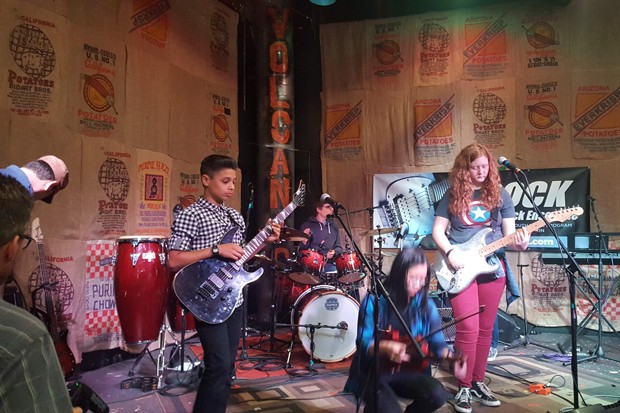 I have come to a quiet residential street near the edge of southeast Bend on a warm summer night to witness the future of rock 'n' roll. It's an unlikely location, but as I approach the outside of Rod DeGeorge's home studio, the muted tones of what sounds like an Iron Maiden cover band drift slowly toward the front lawn.

Needless to say, I have found the right house.

DeGeorge is Bend's resident guitar god, having played for nearly three decades with musicians like Paul Stanley of Kiss, as well as members of Foreigner, Bad Company and 38 Special. Tonight, he's in teacher mode—hard at work with three teenagers—all members of CROCK, short for Cascades Rock Ensemble. It's a performance-based music program made up of young, local musicians. The idea is to take kids through 10 weeks of rehearsal and then get them up onstage at a local club playing live in front of an audience.

DeGeorge, CROCK's music director, came to Bend in 2014 where he eventually met the project's founder and producer Jean George, who had just launched CROCK a year or two earlier. George's three sons had taken part in a similar program at the School of Rock Austin when the family lived in Texas. "Kids got on stage and it was like magic," he says.

It's that live performance aspect that separates CROCK from standard music lessons—which George recommends as well.

"That's all great. All kids should take lessons. I encourage it—incredibly. But having that anxiety that builds to an event is what really causes somebody to flourish. They build the anxiety up and then they let it go onstage—and when it succeeds—it's just huge. Their parents light up, the kids light up, we light up. It's so much fun."

It's also an emotional experience. "You kind of get teary eyed," says DeGeorge. "For me it's about teaching younger kids and seeing them introverted at first. Then they do a couple performances and you see them come out—and then you see how they carry themselves differently. You see how they interact differently."

Back inside the studio, it's the first night that these three musicians have played together. Still, they have an easy chemistry that makes them seem like a seasoned band. It's actually a five-piece group, but two members couldn't make rehearsal that night. That's why bass player and singer Emily Wing has stepped in to do the lead vocals on the Guns N' Roses classic, "Sweet Child O' Mine," with Steven George (Jean's son) on drums and Brandon Hilton on guitar.

"She's got a smile it seems to me

Reminds me of childhood memories

Was as fresh as the bright blue sky"

Wing, who claims to be "99.999 percent" sure she wants to be a professional musician, says her parents are generally supportive. "My dad's a musician," she says. "He plays guitar. Music has been ingrained in me since I was very small. Being onstage is an excuse to be weird in front of other people. It's super fun. I can't really see myself doing anything else." As for Mom and Dad? "They think it's great," she says. "But they're working on having me become more well-rounded. Anything in the arts is great."

Both Hilton and Steven George note the benefits of learning to play live. "It really helps you advance as a musician," says George. "It's a lot of fun too—just being on stage in front of a bunch of people playing music." Hilton, who just moved to Bend, agrees: "I was wanting to play live shows again," he says. He especially likes "the adrenaline of just being up onstage in front of people, and the fun of performing."

While previous performance time isn't required to join CROCK, George recommends that participants do have a few years of experience playing their instrument. The rewards are endless—and not just in terms of music. George's advice for parents? "Get kids involved in music under any circumstances, even if they're not intent on becoming a musician," he says. "The whole experience just opens them up in a way that's really hard to get.

"I've seen these kids after a show. They're like kites. They fly out of the place. It's something you don't see often."