The Rock and Rye resurgence

Rocks and whiskey—or rocks with cocktails—typically refers to ice. But with rock and rye, the rock is candy. That sweet addition, oftentimes including citrus, has a long history. 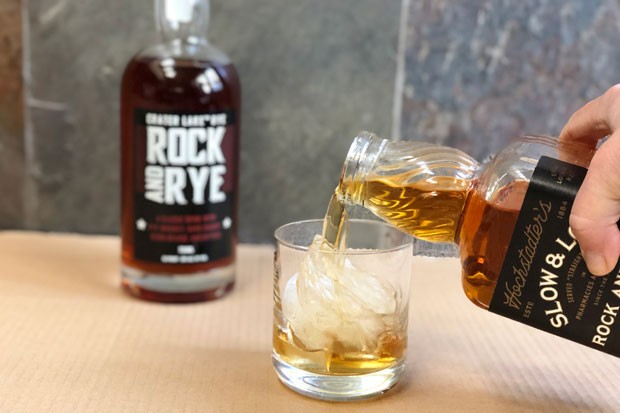 Let's start with rye whiskey. From the end of the Civil War to Prohibition, it was the main whiskey consumed in the United States. Rye farmers distilled it with leftover grain. George Washington distilled it on his Mount Vernon estate. Even while in its heyday, the young, spicy spirit was still rough around the edges. Barkeeps would serve it with rock candy, sweetening the drink to make it palatable.

As the Temperance Movement gained popularity in the 20th Century and led to Prohibition, rock and rye found its way into the pharmacy, curing all sorts of ailments including sore throats, coughs, colds, consumption and basically any sort of throat, chest or lung ailment. When Prohibition ended, farm subsidies were first given to corn—which ultimately killed rye whiskey in favor of Kentucky bourbon. Rock and rye slowly fell by the wayside.

In 2006, as told by Dave Pickerell in "The Rise and Fall of Rye," cocktail culture began to appear in the U.S. As the movement spread, bartenders researched classic cocktails in books such as "The Bar-Tender's Guide" by Jerry Thomas and "The Savoy Cocktail Book" by Harry Craddock, discovering cocktails that used rye whiskey. Demand for the spirit increased about 600 percent between 2009 and 2015.

Recently, rock and rye has seen a resurgence. The bottled cocktail is similar in taste to an Old Fashioned, a drink that's incredibly easy to make, involving a half-teaspoon of sugar, three dashes Angostura bitters, two ounces of whiskey or bourbon and an optional orange or cherry garnish.

I tried Hochstadter's Slow & Low, which hails itself as the first bottled cocktail, established in 1884. The rock and rye recipe, produced and bottled by Hochstadter's, has been updated to include raw local honey from Pennsylvania, air-dried navel oranges from Florida and Angostura-style cocktail bitters with rock candy. At 84 proof, the spirit is strong but finishes with smooth honey and citrus notes.

A new, local addition to the category, bottled by Crater Lake Spirits is their rendition of rock and rye, with dark cherry, blood orange and bitters. At 60 proof, the Crater Lake Spirits Rock and Rye is sweeter and easier to drink. The beautiful cherry notes linger first on your nose. If you like the strength of an Old Fashioned, the Hochstadter's is probably for you.

Locally, rock and rye is gaining popularity. "We sell quite a bit of it, lots of requests," said Trailhead Liquor owner Angela James Chisum. "It's great for folks traveling because they can just add ice." This is an excellent point. While an Old Fashioned is easy to make at home, it's much easier to pull a bottle from your suitcase and pour when you chill in your hotel room, or grab a cocktail-filled flask when backpacking or camping.