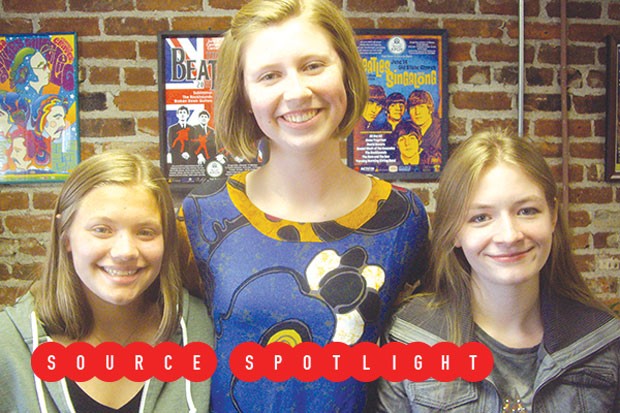 It was four o'clock on a Thursday afternoon. I can't remember where I was driving, but on KPOV-FM (88.9), the DJ dropped the 1963 classic, "Be My Baby" by The Ronettes, featuring Ronnie Spector. As the Bend traffic slowed, my mind flipped the switch to that song when it was featured in the 1973 Martin Scorsese film, "Mean Streets." That opening scene made me love this song all the more. When a DJ opens a show with this song, they've earned my attention and respect.

And so it was that the "Youth Radio Hour" on KPOV grabbed me by the ears and heart on a balmy, late spring Thursday afternoon.

A small but dedicated posse of young DJs is doing its part to keep the magic of live radio alive, raining sweet tunes on the ears of Central Oregon from 4 to 5 pm every Thursday.

The "Be My Baby" show was the effort of DJ team Lauryn Cole and Vivienne Cornutt, who've been co-hosting shows on KPOV since last fall. Friends since they were in elementary school, they're both 17 and juniors at Summit High School.

"It was Lauryn's idea," to start doing a radio show, Cornutt says.

"It's a team effort," Cole counters. "I like the idea that we're potentially reaching people." The co-hosts take turns coming up with a playlist and sitting in the "captain's chair" in the control room, while the other sits at another mic nearby. The two are calm and collected, having fun as they work through their '80s playlist. Sometimes there's a theme such as old jazz, rhythm and blues or electronica; other times they wing it.


"Who would've thought that AC/DC would bring a father and daughter together?" —Randy Windlinx tweet this

Both girls say they've been influenced by the music their parents played while growing up. Cornutt prefers alternative rock including U2, Smashing Pumpkins, Squeeze and "clean" Blink-82, which she laughs, "is hard to come by."

Cole is more into rhythm and blues, Motown and Sinatra-era music.

"My favorite part is spending time with Vivienne and learning what it's like to operate a radio station, what goes on behind the scenes," Cole says. "It's kind of exciting to be a part of it. I like hearing all the new music that I get exposed to."

Cornutt adds, "I enjoy spending time with Lauryn. I like the independence of it because it really feels like you're in charge of it with your partner, and even if no one's listening to it, it's fun to share. It's a good way to volunteer in the community."

Erika Windlinx, 18, is a newer volunteer who now has about half a dozen shows under her belt. She plays classic rock—music often older than she is.

"I also give a bunch of facts about the rock songs I dig up," she says.

Windlinx got started by taking the KPOV radio class offered through Central Oregon Community College. "You get the instruction and then you get to be a DJ and try it out. I'm still figuring it all out."

She recalls her first show, when the music she'd brought fell about 30 seconds short of her one-hour time slot. "I panicked on the air!" she blurts. Since then, she's learned to bring in extra songs just in case. Still, she's amazed at how fast the hour flies by.

Early on, she got a phone call from KPOV DJ Chuckaroo the Buckaroo (from "Calling All Cowboys," airing 4 to 6 pm Sundays), telling her she was doing a good job.

Windlinx is a natural, expertly hitting her cues and all the right buttons and slide controls, reading the station IDs and live music promos. A tad of nervousness still propels her to talk rapidly, something she admits she is still working on.

"I've always been listening to the radio and always thought it would be fun to be a DJ," she says, adding that she'd like to work in radio.

On a recent Thursday, Windlinx's dad, Randy, came to watch her show in person for the first time—a fun moment, since she learned most of the bands through him.

"Who would've thought that AC/DC would bring a father and daughter together," Randy chuckles. While he's directed his daughter to a number of bands growing up, he still thinks of more bands that she should check out. Most recently, it was Bachman-Turner Overdrive.

Some of Windlinx's favorite bands include Journey, Def Leppard, Fleetwood Mac, Queen, REO Speedwagon,  Aerosmith, Kiss and the Guess Who.

The "old timer" of the current stable of young DJs is Axel Hovorka, 13, who started DJing more than two years ago, in the fifth grade. He, too, took the DJ course at COCC and has attended the KPOV kids radio camp. He also has a thing for music of a certain era.

"Classic rock is pretty much the only thing I play," he says, adding that he appreciates the old school vibe of vinyl records. Early on, he says he received a lot of help from fellow KPOV DJ Mike Ficher (of the "Ultimate Oldies Show," airing 6 to 8 pm Fridays).

Hovorka says he listened to a lot of music traveling in the car while growing up in southern Utah. Phil Collins and Earth, Wind and Fire were his gateway to other music. He and his dad, Joe, have done shows together during KPOV pledge drives.

Hovorka says he always has a playlist ready, because "winging it seems like a disaster. Having a pretty good idea of what you're going to do is really important." The one constant in Hovorka's shows: ending every one with "The Final Countdown" by Europe. But the artist that Hovorka says he enjoys playing the most is Prince.