As rock climbing has taken off and rock gyms have skyrocketed in popularity, the number of visitors to Smith Rock State Park has doubled over the last decade, park managers say. Today, fixed hardware, or "bolts," fill its rock faces. With so much traffic there, local climbers, historically perceived as law-defying rebels, are welcoming more regulations from the park—though a recent installation shows that some individuals have different ideas on how to get there. 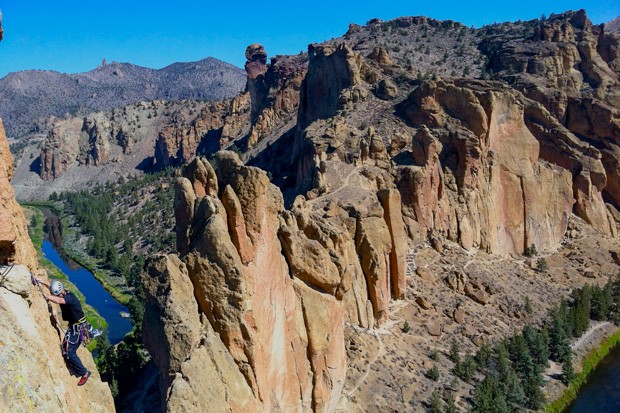 On Aug. 28, longtime climber Shawn Snyder installed a rebar ladder up Picnic Lunch Wall, at the foot of Misery Ridge Trail, and announced he would install these around the park until a "bolt ban" was in place. To highlight the park's lack of rules, Snyder took the same kind of action he's fighting against, placing low-quality rebar on the wall instead of the sturdier stainless steel. Local climbers called on the park to take action. On Aug. 31 officials placed a ban on all hardware placement or removal without park permission.

"Our goal was to get this done immediately so as to not lose our ability to climb at the park," said Lizzy VanPatten, co-founder of the women's climbing group, She Moves Mountains.

On Aug. 31, Davey released a memorandum covering the new bolting policy. A failure to obey the policy can result in a warning, citation or exclusion from Smith Rock. Snyder had installed hardware before this policy was in place, so he's not subject to any legal action, though the rebar has since been cut and any holes will be filled.

Davey said he doesn't intend to prevent climbers from developing and replacing hardware in the park.

"(The goal is) really just to improve the communication between the park and the climbing community and make sure that our relationship continues to strengthen and grow," Davey said.

Climbers at Smith Rock have historically had a good relationship with park officials. Members of local climbing organizations, such as the High Desert Climbers Alliance and Smith Rock Group, see asking for permission to install and remove hardware as a small price to pay.

"It finally felt like the cost of regulating everybody was worth the benefit of having specific rules in place to remove bad actors," said Max Tepfer, a HDCA board member.

A rift between climbers

Until the recent decision from Smith Rock State Park, climbing development at the park had been self-regulated. Snyder believes climbers are destroying the park and seeks to prevent improper bolting and rebolting. In the past, he's been temporarily banned from the park and arrested for removing ropes and gear off the walls, which he deemed "eyesores."

"My goal for a long time has been to get all of us to look in the mirror and see that we ourselves, as a so-called climbing community, are the problem at our climbing areas," Snyder said.

He considered his recent installation as a last attempt to get the park to instate a bolt ban and evaluate its bolting practices. Other ladders are installed in the park to give access to various areas, yet with those, park managers gave developers permission to install them with high-quality materials.

Tepfer, who focuses on fixed hardware for the HDCA, admits that a high degree of maintenance is required to replace bolts and anchors at Smith, and some rebolting efforts have not been up to par. But Tepfer added that climbers are rarely in danger of falling due to loose bolts, and that the HDCA has employed mentorship programs to address any visual and structural problems.

"Everybody's trying to produce the quality of work that (Snyder) would like to see up there, but it takes time to pull this off," Tepfer said.

Snyder said he's tried to communicate peacefully with members of the climbing community, to no avail, and has determined that physical threats and actions are the only methods that work— though he admits that these actions are "unacceptable."

Justin Brown, a board member of the Smith Rock Group, a nonprofit focused on year-round maintenance of the park, said there are many instances where Snyder and others agree, and most people admit that Snyder is skilled at placing and removing bolts.

"I think the biggest sticking point was the methods in which he used to try and prove his point," Brown said.

Park managers have been working with the HDCA on a climbing management plan for some time now, which will include a similar policy. This plan is separate from the bigger Smith Rock Master Plan—on hold due to budget cuts and awaiting public feedback. 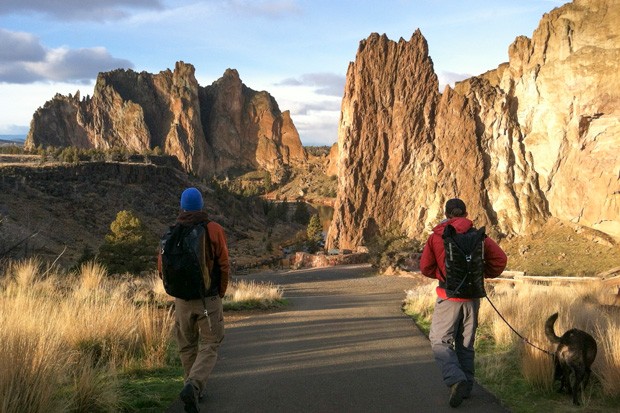 While a final Master Plan is still a way off, the park is hoping to implement the final climbing management plan by spring 2021 and establish a formal board to vet developers at Smith.

Though most new development is happening in the nearby Marsupials on U.S. Bureau of Land Management land, outside of the park's jurisdiction, some developers have already been approved and see asking for permission as only a small hurdle. Many local climbers and developers are thrilled by this new policy and the speed in which the community united to call for action.

Snyder, however, is unhappy that climbers can still install and remove bolts with park permission. Although he cannot legally place any more ladders at Smith, he's already placing them in the Marsupials and plans to do the same in Joshua Tree and Yosemite, he said.

As Snyder puts it, "Every single one of these places needs to have a mandatory moratorium until they get their sh** together and take responsibility for all of these climbers going into our majestic areas and destroying them."