Roller Sports Coming to The Pavilion

Beginning July 9, The Pavilion will offer a regular schedule of open skate sessions for roller and inline skaters, according to BPRD. 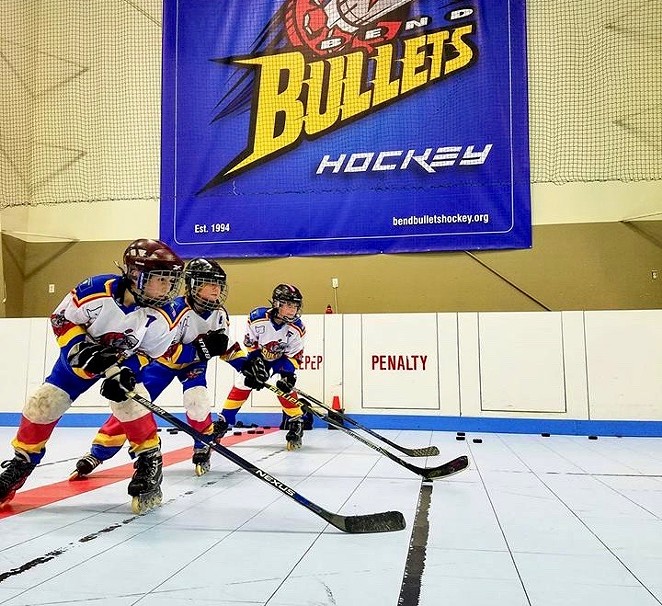 “Roller sports is a perfect fit for The Pavilion,” Matt Mercer, recreation services director told the Source. “It will enhance the community’s access and benefit of the facility by filling the shoulder seasons, summer evenings and weekends with a variety of roller sport and complementary activities.”

Although the open skates aren’t scheduled until July, The Pavilion is opening its doors to the Bend Bullets—a youth inline hockey club—this week so the kids can keep playing and developing their skills. The Bullets got their start in 1994, when CIS owner Butch Roberts founded the program. Back then, players skated outdoors where the current Juniper Park splash pad is, before moving to the Rock Rink and Roll—which is now the Midtown Ballroom—then to CIS in 2005.

Roberts said the decision to transition the rink to K1 Speed Go Kart racing was difficult one. Roberts built the outdoor rink at Juniper Park 26 years ago and said he’s been passionate about skating and hockey for his entire life, but the decline in skating, hockey and roller derby programs over the past few years made the need for a change.

“This has been a really emotional transition for me and my family,” Roberts said. “Skating and hockey were the reason I invested in Cascade Indoor Sports more than 10 years ago.”

Bullets Manager Steve LaCrosse said the final night at the CIS rink left some of the kids and parents feeling nostalgic, but that he’s excited for the new partnership with BPRD.

“Park and Rec is a great organization and we’re extremely happy to be partnering with them,” LaCrosse said. “The Bullets have been around since the early 1990s in Bend and have a lot of success over the last few decades. Partnering with Park and Rec and playing at The Pavilion will help introduce the program and the sport to more kids.”

The Pavilion will also host the Lava City Roller Dolls—Bend’s all-women flat-track roller derby team—starting this year. According to Lava City’s Emily Pokorny, the team transitioned its schedule this year, and will now play its four to five home games from February to November, when there's no ice at The Pavilion.

Pokorny said Lava City already has a good working relationship with BPRD, and that the team’s excited to play outside and thinks the matches at The Pavilion will draw more interest in the sport.

“Skating at The Pavilion will make roller derby more viable and accessible to kids and new skaters,” Pokorny said. “We’ve already gotten a few inquiries after posting about the new venue on social media.”

Mercer said the Bend Bullets are donating a new skating surface to BPRD. LaCrosse said it will be very similar to the one at CIS, but will have venting and temperature resistance since it will be an outdoor rink.

“This has been a really emotional transition for me and my family. Skating and hockey were the reason I invested in Cascade Indoor Sports more than 10 years ago.” —Butch Roberts tweet this

The new surface is coming from VersaCourt—who designs, manufactures and installs courts for a variety of sports—in Georgia. Both BPRD and the Bullets hope to have it installed before the PAC Summer Camp starts on June 17 at The Pavilion. If the surface doesn’t get to Bend and installed before the 17th, the installation will have to wait until the camp ends because it runs all day, LaCrosse said.

Adult hockey enthusiasts and newbies also have reason to celebrate BPRD taking over the inline hockey. According to Mercer, BPRD is working on adult hockey leagues and youth learn-to-skate programs for spring 2020.

Mercer said BPRD hopes to offer some inline hockey pickup and clinic opportunities this fall, but need to wait until spring to really get leagues formed.

“As far as the structure of the adult and youth leagues, we have not had time to work on this yet,” Mercer said. “We will absolutely seek input from potential players as well as see what has worked well in other facilities.”

Mercer said BPRD anticipates the roller sport season starting as soon as they are able to complete the conversion (from ice to roller) and continue until they build the ice for the following season.

“How we schedule adult and youth leagues is still to be determined, but we have the opportunity to have several shorter sessions or one longer one,” Mercer said.

The changes to The Pavilion won’t affect the PAC Summer Camp or displace any of the other programs, Mercer said.

The Pavilion will post schedules for inline and roller skating on its website near the July 9 opening date. People will be able to rent skates just like during the ice season, according to BPRD.

Roberts said all of the hockey equipment—the boards, glass, netting, goals and other equipment—are being sold as a package deal and he hopes to be open for racing in mid July.