Give Aloha, Get Aloha

Aina Kauai Style Grill, tied for Rookie Food Cart of the Year, was selected for its welcoming Aloha spirit and for bringing Central Oregon a slice of Hawaiian culture and cuisine it had not yet seen. 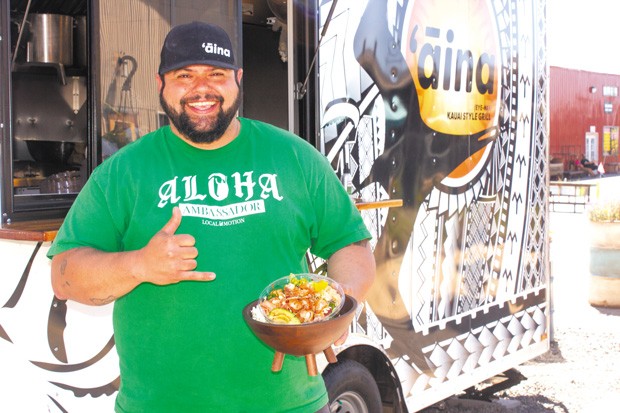 Owner Ian Vidinha grew up on Kauai, with native Hawaiian and Portuguese roots. His culture translates into his unique and traditional food and into the feel-good experience he provides to customers. Some popular dishes include the expertly crafted Spicy Poke Bowl, Poke Nachos (which are topped with a house-made sriracha sauce and creamy wasabi aioli) and the crunchy and flavorful Chili Pepper Chicken.

“I was born and raised on Kauai and I moved to the mainland in 1999,” Vidinha explained when asked how he got his start in the food industry. “I started cooking pizza in Colorado, and I ended up as a corporate trainer. I went back to school, got my business degree and then moved to Bend, where I was a stay-at-home dad for two years. I realized I needed to get something going; to do something that I was passionate about.”

WATCH: Chef Ian Vidinha of Aina Kauai Style Grill talks about why he does what he does:

“I wanted to serve the food I was raised eating,” Vidinha said. “Everything on the menu is my take on the meals I ate growing up. I like making poke, so I concentrated on perfecting the poke bowl. When I was growing up, poke bowls weren’t huge, but poke was. Everything in the bowl—the kimchi, the daikon, bean sprouts, salad, pickled veggies—these are things that were on our table every night. All of my plates are well thought out; they tell a story.”

As the food truck continues to evolve, Vidinha hopes that he can make some of the popular rotating specials—like the ever-popular Sushi Burrito—staples of his creative menu. “Right now, the sushi burrito is a specialty item that I can only make in small batches,” he explained. “It’s basically just a big sushi roll, made with spicy tuna, shrimp, poke, fresh salad mix. The goal is to get it on the menu full-time. I’ll be changing up my cart so I can start making more of those.”

The food at Aina is an experience in and of itself, but for Vidinha, dining is about more than just what you’re eating.

“Aloha is big in Hawaii; Aloha is in me,” he said. “When I first started in the back of house, in a hotel in Hawaii, I remember someone telling me, ‘People might forget about your food, but they will always remember the way you made them feel.’ I try to make sure that everyone feels welcome and at home. I like making people happy; give Aloha, get Aloha.”

That Aloha spirit is just one reason Aina earns our (tied) award for Rookie Food Cart of the Year. Shaka brah!

Cayla graduated from UCLA with a degree in playwriting, soon after realizing that playwriting is not a viable career option. Fortunately, this led her to journalism, and she is thrilled to be part of such a unique and fun-loving team. Upcoming local events? Send them her way!
Read More about Cayla Clark