Rookie Food Cart of the Year

There are a lot of great food carts in Bend, making a lot of great food. But in the case of Hogan's Hoagie Stop, we felt their sandwiches warranted creating an entire new category: Rookie Food Cart of the Year. Plus, Central Oregon has so many food carts these days, that recognizing a new, successful player just seemed like the right move.

Hogan's has been a frequent stop for the Source staff this year—which includes a variety of different eaters, including vegetarians and omnivores.

The sandwiches at Hogan's Hoagie Stop are next level. The bread, meat—or veggies—and the special, homemade sauces make these delightful meals into something you'll dream about. 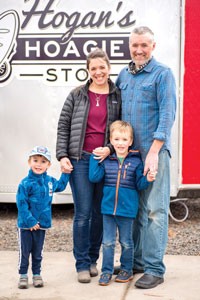 Jason Hogan and his wife Hillary opened the food cart at River's Place on Purcell Boulevard on Oct. 28, 2018. The cart serves seven regular sandwiches, from the Murray—grilled turkey, salami and roast beef surrounded by provolone and gouda cheese, shredded lettuce and banana peppers tossed in Italian vinaigrette—to the O.G. Combo, which has melted American cheese on Big Ed's sourdough. Plus, there's usually a special on offer.

"There are a ton of awesome people doing awesome stuff in this town and I'm honored to win this award," Jason Hogan said. "We're getting a big following of regulars who really appreciate what we're doing."

Hogan said the cart is getting a lot of weekend business now that winter's finally moved on, and he's ready to rock n' roll this summer. 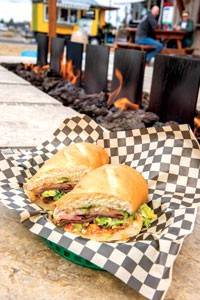 Hogan's Hoagie Stop also serves soup and cookies, along with some soft drinks and juice. Go get 'em, Central Oregon—you won't be disappointed.