County Commissioners look at marijuana growing rules, but have made no changes just yet

October 19, 2018
comment
The Deschutes County Commission is looking at proposed rule changes for marijuana growing in unincorporated areas of the county, which focus mainly on sound, noise and smell. The Commission looked at those proposed changes on Oct. 17, but has yet to vote on them.

Deschutes County already has a number of regulations for marijuana growers, and the new regulations would restrict business owners further. Many growers feel targeted, even though they are working to grow a business.

"We are actually not in the recreational market right now, because with being in Deschutes County and needing to build infrastructure from the ground up, the overall process of Deschutes County was really challenging to get through," said Lindsey Pate, co-founder of Glass House Grown and president of the local advocacy group, Celebrate Cannabis. "We found a lot of delays and it just really impacted us negatively, in terms of our business growth." 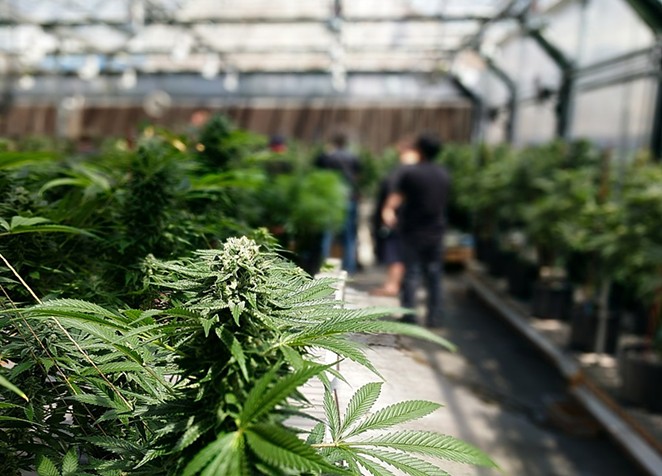 Glass House Grown began medical sales in 2013 and has been trying to transition to the recreational side since it was legalized.

"Everyone really came from the medical space, but in terms of running a business, there, unfortunately, is really no longer a viable opportunity to be a medical business, under medical rules anymore," she explained. "We're actually very close to breaking ground and it's taken us about two-and-a-half years to work through to get to that point. It's a little rough to be a cannabis farmer in that space."

Deschutes County is unique in that it has "exclusive farm-use land," which means the legislature allows recreational marijuana and medical marijuana to be grown as an outright crop, according to County Commissioner Tammy Baney, "similar to if you were growing hay."

To help mitigate some of the issues surrounding growing marijuana, the commissioners are also looking to change setbacks for those properties, believing issues of odor, sound and smell can be reduced by spreading out the distance between grows and other properties.

Pate said their business has been surviving mostly off of fundraising, while they waited for approval of building permits and other approval from the county.

"I think the big thing that is important about this is that we, as a state, have some of the strictest regulations for cannabis, so it's very shocking that we're going back in this regard," she explained. Pate says the new suggested code changes affect everything they’ve been working toward.


"We've addressed those concerns in our code and yet we're kind of going back and making things look more unreasonable," she said, adding that their new proposal does include some positive changes, like increasing the decibels in the noise regulations. "I feel like they threw that in there to try to show that they're hearing us, but that's not enough. That little change, it's great. Thank you very much for that, but it's not enough when you review the code. If you run through the summary of the changes, it's just strengthen, strengthen, increase, increase. Almost every single change is either to make less available property toward this land use or to make it more challenging to receive a land use."

For yard setbacks, the proposed setback would go from 100 to 200 feet. Off-site dwellings would see a proposed setback change from 300 feet to 400 or 500 feet. A property would now also need to be at least 1,320 feet from any state, local or municipal park—a change from the current rule, which says the property needs to be at least 1,000 feet from any national monument or state park, and at least 2,640 feet from other lots or parcels approved for marijuana. Another proposal is to remove any exceptions to those setbacks, which currently can be granted by the planning director or hearings body.

Because of odor, growers in the county are already required to grow their crops indoors, though Baney explained that because of year-round growth, indoor growing makes sense anyway.

Deschutes County has a Dark Skies ordinance in unincorporated areas, put into place in the '90s. Another proposed rule change states that inside lighting shouldn’t be visible from the outside between sunset and sunrise.

"At the time, we wouldn't have thought of a large co-op house type of greenhouse that is lit up in the evening," she explained. "That greenhouse could be 10 to 20,000 square feet. It literally looks like the mothership has maybe landed in the backyard. So, at the time, would we have included that type of a lighting in our Dark Skies ordinance? I would say yes."

Pate feels her business is supporting the economy of the county, but is ostracized because of the type of business they’re in.

"Here we are able to bring investment money in to this county, hire contractors to build out facilities or to update facilities," she said. "They're supporting a lot of jobs."

Baney said she’s not necessarily a proponent of marijuana, but it’s legal and she does support private property rights.

"Personally, it's been one of the most challenging issues, both in terms of the industry trying to get legal, watching those that want to be legal go through a really onerous process, and then we still have this other black market," she said. "We still have over 700 legal medical marijuana grow sites in Deschutes County, and those can be anywhere. Those 700 are in every part of our county and within the cities. For those that think that it's not going to be here, I think that ship has sailed. So my job has been to try to find balance, and it's been really, really challenging."

The Deschutes County commissioners reviewed the changes Oct. 17, but didn’t vote. When they do, there’s a 90-day period for regulations to become formalized.