Running is hard. Biking is hard. Work is hard. Almost anything in life can deal you stress – it's all just a battle in how we choose to manage things.

Not all ailments are ones that are visible, either. Bryan Messmer, founder of Easy Float, says insomnia is what pushed him into the floating business.

"Dude, I tried everything. I was doing Melatonin, Valerian Root, exercising like crazy, no coffee at all, no beer, no water after 5 and then I tried Trazadone," details Messmer of his sleeping battles. "And the only thing that helped me sleep was floating."

Messmer described his first floating experience as "miserable," but he was getting the best sleep of his life. "The first float is tricky. It's a practice for sure," recalls Messmer. "That's why I encourage people to get the first one out of the way. Then try the second. And if you don't like it the second, or third, then maybe it's not for you."

Easy Float opened in February 2017, back in Denver, Colo. Being an Oregon native, Messmer was excited to arrive in Bend and open a location in the former Float Central location. Easy Float Bend's first official float was in November.

In the float tank, the body is suspended without the pressures of gravity. It works out knots and tension within the muscles because, according to Messmer, the body relaxes into its most natural state. This suspension is achieved from the around 900 lbs. of Epsom salt in the tank. These are just the more obvious physical benefits, Messmer says, but there are also a lot of neurological benefits as well.

"The number one thing, with Easy Float as a brand, is it's designed to be for everyone," says Messmer. "Everyone from people with fibromyalgia, arthritis, ambiguous auto-immune pain, to, like, stressed out suit-and-tie-level executives and everyone in between."

Endurance athletes are another portion of that demographic. Bendite Eric Heinemann is currently training to complete the Leadman & Leadwoman races—a series of six races based in Leadville, Colo., part of the Leadville Race Series. To complete the series, racers must finish five of the six biking and running race options spread throughout the summer. To register for the series, racers enter a lottery and are selected to compete. Last year there were fewer than 50 athletes who registered, according to Heinemann—a pretty clear indication of how tough these races are. (The race series website states that 44 racers registered in 2018.)

"Not that many people are willing or wanting to do this," says Heinemann. "It will be pretty difficult. It's huge for me. I'm not too worried about the ramp-up races, but the 100-mile running race is one week after the 100-mile mountain bike race. I've never even run more than 30 miles."

Already being a pretty consistent cyclist, Heinemann's training is focused on trying to stay out longer on his bikes and runs, and to eventually get up to around half the distance of the races. To help with recovery, Heinemann started floating around two winters ago. Now he's a regular. 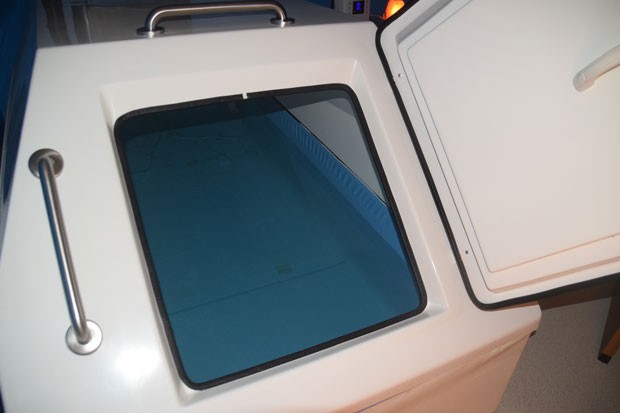 "For me it was an instant (snaps fingers) this is great – this feels great for me," he recalls. "For an amateur athlete, or any athlete, it kind of resets me physically. And mentally it's a meditation."

For Heinemann, the motivation is from one of those invisible ailments.

"My purpose for entering this year is my brother. He's schizophrenic," Heinemann said. "It's going to be his 50th birthday in early June. I'm doing this race series to raise awareness for mental illness and schizophrenia in particular. Which is something I don't think people are doing very often."

Heinemann has previously completed the 100-mile mountain bike race, where he found himself alongside a pair of brothers doing the race together. This was a partial moment of inspiration for Heinemann, as he could only imagine what it would be like to get to ride this with his older brother Steve.

"He's been on strong medications for years. He's not the same guy I knew when I was kid," recalls Heinemann. "I was thinking that could have been us. Riding around. Going back and forth about different tactics. And then bagging on the other guy because he's not doing as well or whatever."

While Heinemann doesn't know if his brother will be able to make it out to the races in person, he knows Steve will still be the driving force that helps him get the job done.