"Ready or Not" hides from the bigger ideas

Every once in a while, a premise comes along that's so simple and elegant that it's astounding it hasn't been done before. While there are definitely aspects of "Ready or Not" we've seen before, the film is executed with such gusto that it's hard to really be mad at it over the dumb stuff. This movie is designed from top to bottom to do nothing more than wildly entertain an audience and, at that, it succeeds almost effortlessly. 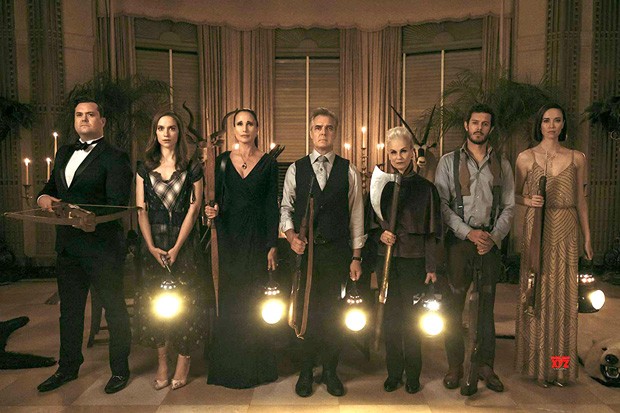 Soon-to-be massive movie star Samara Weaving plays Grace, a young woman who has just married Alex Le Domas, the prodigal son of a massively rich board game empire. Alex and Grace are married at the Le Domas estate, as tradition dictates they must—but there's also another tradition that's a little stranger than needing something borrowed or blue.

At midnight on their wedding night, Grace must draw a card from a mysterious box left by the family benefactor several generations earlier. On the card is written a randomly selected game the entire family must play right away. It could be something totally harmless like Go Fish or Old Maid, but if the game is Hide and Seek, then the family must find Grace before dawn and sacrifice her to their creepy ass benefactor or something terrible will supposedly happen.

As much fun as it is watching a badass woman taking on a bunch of clueless rich folk, the real joy of "Ready or Not" is not knowing whether something is really going to happen at dawn. The instructions have been passed down through generations, so the family patriarch, Tony (a perfect Henry Czerny), and the matriarch, Becky (Andie MacDowell), don't have the slightest clue if they'll just drop dead or if nothing will happen at all. Having the extra bite of not knowing whether the family is just evil or whether they're crazy and evil is delightful.

A film where the central conceit is that the rich and powerful are sacrificing the poor in order to stay rich and powerful could have had a lot to say about class struggle and been a darkly ironic think piece, but it never goes far enough. tweet this

"Ready or Not" looks great and has perfect performances, a luscious score and had me on the edge of my seat the entire time. The only area in which the film falters is the script, which takes a few too many easy jokes and doesn't use the themes of the film as smartly as it should have.

A film in which the central conceit is that the rich and powerful are sacrificing the poor in order to stay rich and powerful could have had a lot to say about class struggle, and could have been a darkly ironic think piece, but this one never goes far enough. A premise like that can be mined for some truly intelligent horror, but "Ready or Not" is pure popcorn instead, a movie that goes down easy without leaving much to savor afterward.