Running for the Medals | Outside Features | Bend | The Source Weekly - Bend, Oregon

Running for the Medals

The tale of a self-described "medal junkie"

Some people collect plants. Some collect makeup; others, gear. Jen Padilla collects something that takes a little more effort to get: race medals.

"I'm a medal junkie!" she exclaims. "I do so many races because I like racing, but also because it gives me a purpose and something to train for. But I also really like the medals." 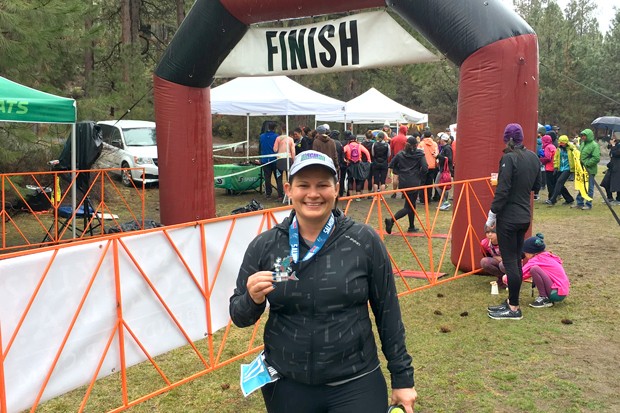 This year, Padilla is competing in a whopping 20 races, most of which will happen by mid fall. Padilla doesn't normally enter so many races, but due to an injury last year, she deferred several races to this year. If you already thought doing 20 races in a year was a little crazy, imagine doing 20 races in less than 12 months, only a year after your tore you ACL and MCL.

Racing has been in Padilla's blood since 2011, when she ran her first race, a marathon with Team in Training, a group that supports the Leukemia & Lymphoma Society. It was a particularly memorable first race, because it was right after 9/11 and Padilla, who lived in Las Vegas at the time, didn't know if she would be able to fly to Portland, Oregon, for the race.

After that, she was a volunteer coach for three years as she tried out different sports. These days, Padilla competes in triathlons, running races, obstacle courses like Spartans and Tough Mudder, and some biking events, although she considers those "rides" and not specifically races.

Padilla relocated from Las Vegas almost two years ago. Since moving to Bend, she's had to adjust her expectations about competition and times due to the plethora of professional and semi-pro athletes in Bend.

“It’s impressive (and a little humbling) to see a 70-year-old beat you at a half Ironman, or to see a kid passing you when you’re biking up the McKenzie Highway.”—Jen Padilla tweet this

"I did the PPP (Pole Pedal Paddle) last week with some friends and I thought we had good times, but our team got 10th out of 12 in our age group," she says. "It's definitely more competitive here. I have a shirt that I wear when I run sometimes and it has a picture of a turtle on it and says 'I am running,' and that's totally me."

Although Padilla has found herself in the slower half of many of the races she's done, she still appreciates being surrounded by athletes in Bend, even if some of them are 30 years older, and some 30 years younger.

"It's impressive (and a little humbling) to see a 70-year-old beat you at a half Ironman, or to see a kid passing you when you're biking up the McKenzie Highway," she says.

Instead of comparing herself to other competitors, Padilla competes against herself and enjoys the experience of being on different courses.

Training takes up a large chunk of Padilla's free time, but she considers training and racing a hobby, so motivating herself to get out there and run, bike, swim or strength train is usually not too much of an issue. Padilla has also gotten involved with several running groups, so some training time doubles as socializing time.

Padilla admits she spends a good chunk of money on entry fees, (she said she spent around $2,000 for all her races this year) but feels like the experience of participating in the races, combined with the motivation it gives her, makes it worthwhile.

If you're wondering how Padilla manages to do all these races and work full time for Bend Park and Recreation District (disclosure: I also work there), and also have a social life and take care of errands, you're not alone.

"I'm very efficient with my time, I have some flexibility with my job, and everything here in Bend is in such close proximity that getting around doesn't take forever," she explains. "Also, I don't sleep much."

She said the location of her office, along the Deschutes River, also makes training during the workday easier.

Training season never really ends for Padilla, and once she's done with her races this year, she has her sights aimed for something bigger and more challenging than anything she's done before: a full Ironman Triathlon. She has done half Ironmans and sprint triathlons, but Ironman Barcelona in October 2020 will be her biggest race yet.

"I'll definitely tone down the racing when I get older, but I'm going to keep competing for as long as I can,' she says. "Racing keeps me young!"