FootZone's social media manager tells us what life has been like for runners during the pandemic and how he used running to raise over $15,000 for NeighborImpact

May 09, 2020
comment
Central Oregon is often known as a runner's paradise. But with our lifestyles altered the last couple of months, things as simple as going to the grocery store and how we walk down the street were changed.

Getting outside and having exercise in our lives was still something we needed for our collective sanity as a community, but we had to use mindfulness and different health practices when doing so.

So what did that look like for runners and how have their routines been  changed?

"Runners and walkers have definitely been exercising at more irregular times (early in the morning around sunrise, late in the evening around sunset) to keep safe social distancing and lower chances of running into others. With trailheads and most Oregon State Parks temporarily closed, many are sticking to their neighborhoods to keep from potentially spreading the virus and because it’s most convenient for exercise," said Mark Stockamp, social media manager at FootZone.

"The majority of runners and walkers I see wearing masks in the Bend are on the roads and sidewalks in the downtown area and neighborhoods of Bend. I definitely see less people wearing masks on the trails outside of town. I personally have adopted running at sunrise and have stuck to running on roads and remote trails in my neighborhood, Deschutes River Woods, to keep safe social distancing while exercising."

Actually getting out and running right now might be more difficult than you think, and it makes total sense to feel some drawbacks to doing so. Stockamp says to feel more comfortable that it's important to get creative with where and when you run. Use irregular times and try to avoid popular trailheads like Phil's, Shevlin Park and the Deschutes River Trail.

"Stick to exercising in your neighborhood. It’s not as exciting or beautiful, but it’s way easier to keep safe social distancing and be respectful of others space on your neighborhood’s sidewalks vs. narrow trails," says Stockamp. "Also, it’s OK to feel discouraged right now. This pandemic has created a lot of stress in our lives so I hope runners and walkers are not feeling stressed or guilty for not getting their regular mileage in. I think it’s most important to do what’s best for you and your family’s mental and physical health right now, even if it means running and walking less mileage."

Stockamp notes that he's seen an increase in runners when he's been out during the pandemic. This is probably due to all gyms and rec facilities being closed, which has prevented people and athletes from taking part in their usual activities. Walking and running however have remained a possible and safer option.


"The COVID-19 pandemic can cancel my races, but it can’t erase my love for running and my community." tweet this

The Central Oregon area is home to a lot of races, and we were beginning to hit the early start of the season when cities started to shutdown, meaning that race season itself would be put to a stand still. We've seen races like the Salmon Run and Bend Marathon go virtual, allowing runners to complete the race and run miles on their own time. So even with a giant obstacle such as COVID-19, the running community here has been able to band together.

"The running community in Bend is made up of resilient, determined, creative individuals. It’s wonderful seeing race directors adapt their races to the pandemic by still offering participants the opportunity to race virtually," praised Stockamp. "It’s special witnessing how runners have still been excited to run in the virtual versions of these races and spread their joy and enthusiasm for running with the community. Bend has one of the most optimistic, respectful, and humble running communities I know!" 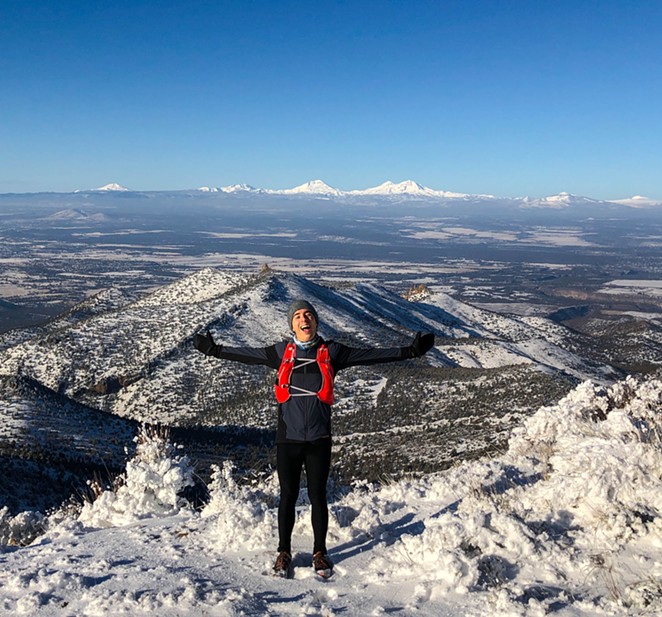 Stockamp himself has a shown a resilience to keep running alive. Originally signed up to run the Peterson Ridge 40 Mile Rumble on April 26, the Rumble would ultimately be canceled in March, something Stockamp says was "depressing" after all the training and work he had put in. Instead of stopping and throwing it aside, Stockamp kept training and ran his own 40-miler on trails and roads near his home. The start and finish line? His front door.


"I love running because of the community it creates and the feeling it gives me when I’m exploring nature and hearing my feet shuffle on dirt. The COVID-19 pandemic can cancel my races, but it can’t erase my love for running and my community," Stockamp told the Source.

He didn't just stop at running the miles, though. Stockamp turned his run into a fundraiser for NeighborImpact. The mission behind NeighborImpact is to provide those with economic disadvantages new opportunity to live better lives. Whether that be through providing food, educational or financial assistance and more, the organization works to make our community stronger.

"Many Central Oregon residents have recently lost their jobs and are looking for a place to turn to for community resources. NeighborImpact is one of their best resources to turn to during these difficult times," said Stockamp. "I knew the pandemic had been financially affecting everybody, so I initially set my goal at fundraising $1,000 for NeighborImpact in the 30 days leading up to my race."

Stockamp surprisingly raised $1,000 in his first day of fundraising. He then received a donation match of $5,000 from an anonymous donor. After doing interviews on Central Oregon Daily and KTVZ, the spread for what he was trying to do grew and Stockamp finished by raising $15,946 and completing those 40 miles.


"I am so grateful and overwhelmed by the generosity of my beloved Central Oregon community to help others during these difficult times. It’s simply incredible all of the good my fundraiser created for the community in Central Oregon in such a great time of need."