Those were the shouts from enthusiastic Bend Bike volunteers last week, petitioning community members and sharing active transport ideas in an effort to raise awareness of the new proposed Bend city budget. If approved, the 2017-19 biennium budget would see increased funding for bike lanes, greenways and pedestrian crossings.

"We're trying to promote cycling as not only a recreational activity but a transportation option by improving cycling conditions within our city," says Nick Stevenson, president of Bend Bikes, a nonprofit spearheading grassroots efforts to sway city council members in favor of the proposed city budget—one the group says would inject millions of dollars towards improving active transportation throughout the city.

As the Bend metropolitan area's population increases by a projected 30 percent in the next 10 years, officials from the City of Bend are shifting from planning projects to implementation—and in the meantime, rethinking transportation initiatives. A proposed $22.3 million transportation package would address not only the growing pressure on improving existing infrastructure — including fixing potholes and repaving streets — but also implement new active transport models. Bendites could see increased dedicated bike lanes, neighborhood greenways and pedestrian corridors that could potentially ease congestion in high volume areas.

Rory Rowan, a project engineer for the City of Bend, was hired specifically for these creative solutions and transportation projects that improve travel by foot, bike and mobility devices. He stresses that the initiatives are inclusive, and shies away from using words he considers inflammatory. "I try to use words like people walking, people biking, because that's what we are, we are people using active transportation options. It isn't drivers versus cyclists or pedestrians. It's people trying to move around the city safely and efficiently. We try to serve everybody."

On the horizon: Neighborhood greenways

Rowan oversees many of the city's projects and emphasizes the need for community collaboration. Making Bend Safer by Design is a city program using a community-driven approach to design ideas in a comfortable and safe way. They currently have at least nine projects listed on their website, saferbydesignbend.com. Rowan supports Bend Bikes' ideas of neighborhood greenways and protected bike lanes and points to a demonstration in 2016 that was put on by the group and Bend 2030, which resulted in a permanent protected bike lane on Wall Street. The importance of neighborhood greenways — roads that feature traffic calming devices such as speed bumps, bike lanes and signage — make walking and biking more comfortable and safer and therefore more enjoyable. 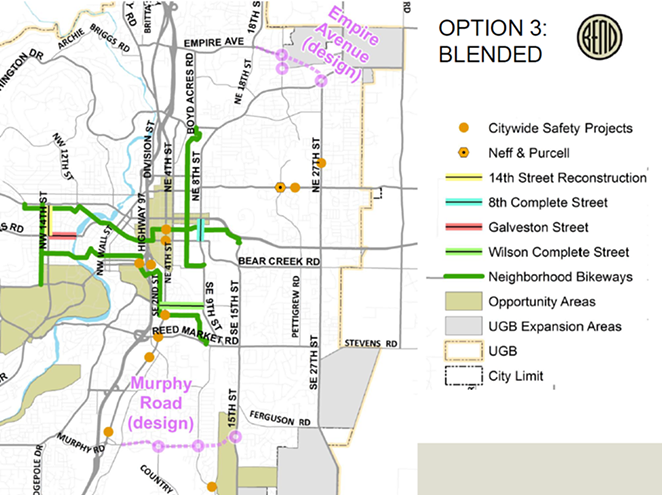 Among Bend Bikes' desired initiatives is a 30-day greenway demonstration that would take place on NW 15th Street. Inspired by Bend Open Streets, an event organized by Commute Options last September, the demo would showcase the benefits of greenways for Bend. In addition, NE Sixth Street, east of Third Street, is another possible greenway site.

Advocates say the cost would be pennies on the dollar compared to multi-million dollar transportation projects, such as the proposed $5.2 million funding for street preservation in the upcoming budget. "We're not talking much here to implement low-cost, safe and comfortable routes for people of all ages and abilities," says Rowan.

"...the City has spent approximately $1 million total over the last two years to directly benefit walking and biking.

"This includes the construction of hundreds of curb ramps, several thousand feet of sidewalk, some minor pavement marking changes such as adding bike lanes as part of re-paving on 3rd Street between Greenwood and Burnside, and the design of several projects that construction is planned for in the next two year budget (e.g. safety crossings, new sidewalk corridors, etc).

"So then you have families that are comfortable going to Juniper or going to the grocery store, or they're comfortable letting their kids getting out there and playing because now there are things like traffic calming mechanisms that have made this an identifiable route that has made it have less traffic. It is a more active route for transportation."

City Manager King noted the need for designated funds for transport in his budget proposal, acknowledging the recent harsh winters that have left Bend streets in less-than-desirable shape. He wrote, "Many of the efforts to improve the transportation system, such as additional street preservation funding, are being accomplished through use of one-time revenues and reserves or reductions to central services and are not sustainable solutions. The short-term strategies included in the proposed budget are aimed at building the community support needed for more long-term, sustainable solutions to Bend's transportation challenges."

City Council: Not all in agreement

Not all agree, however, with the proposed goals. Councilor Bill Moseley, elected to the city council last November, thinks the budget is too vague and needs specifically-outlined projects.

"The proposed budget, including the blended (transportation) approach, was established without goals in mind," Moseley said. "My opposition derives from a process that spends money without trying to accomplish specific, agreed-upon goals." He cites a lack of prior insight, noting, "Bend progresses day-by-day toward disaster," he says. "Bend's problems are also not a consequence of money shortfalls. They are the result of poor planning. Our city needs clear goals and then to align our plans, budgets and resources to achieve the goals. 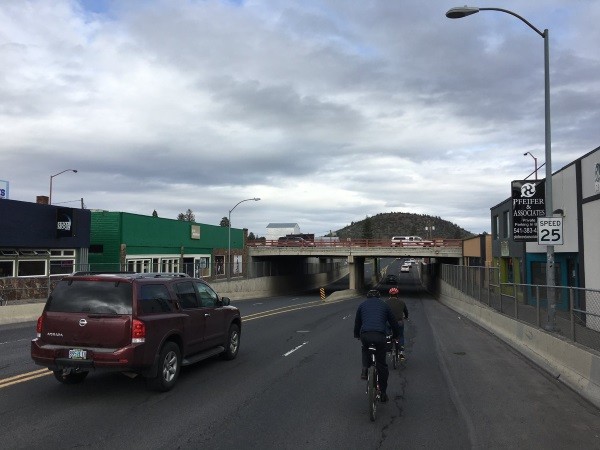 "Without focused goals and clear priorities, anger rises as residents travel slapped-up, eastside subdivisions without adequate roads to connect them. Westside residents respond with alarm as neighborhoods are taken over by vacation rentals, parking problems and late-night noise. New homes are built everywhere with postage-stamp yards."

City Councilor Bruce Abernethy says he's in favor of the proposed transportation initiatives. "I'm strongly supportive of the funding that's in the proposed budget right now for bike corridors. This is something that's been talked about for many, many years and I think it's really critical that the current council pull the trigger, implement these ideas."

Abernethy was one of three City Council members who accepted Bend Bikes' recent invitation to cycle around Bend to see for themselves the strengths and weaknesses of our current cycling corridors. "It was very eye opening for me," says Abernethy, "My biggest takeaway was that even though there are a lot of bike lanes at various places throughout the city, they aren't 100 percent connected, and that's a big deal...for community members to commit to using bikes on a commuting basis or recreational activities, they need to be 100 percent connected." He clarified that this didn't mean Bend needs bike lanes on every street, but that "we do need to be viable corridors that allow people to go throughout the city."

And what about those who say the city should be spending more on improving roadways instead of bike lanes? Rowan says, "I hear that all the time, and what I have to say is, the city is. The city has been working very seriously on these issues. If anyone's followed what we've been doing, last summer and this summer, it's the most amount of paving we've ever done by far. Last summer alone, we had thousands of potholes filled and we hired an additional amount of staff just for the summer, just to do that kind of work after a hard winter, and we're looking to do the exact same this year.

The next City Council meeting is Wednesday, May 17 at 6pm. If you're in favor of increasing active transportation corridors throughout Bend, write your City Council members and sign the petition at www.bendbikes.org.

For more information on active transporation solutions, check out the safer by design's toolbox of terms