Mixed Use off the Parkway | Local News | Bend | The Source Weekly - Bend, Oregon

Mixed Use off the Parkway 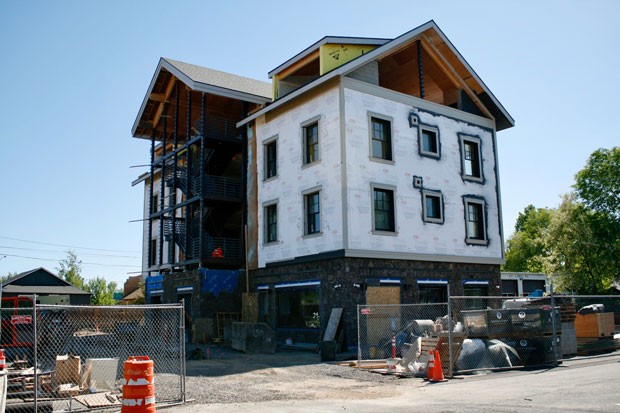 Mixed use is making its way to Bend Parkway. Well, almost. The four-story building under construction just off the Parkway where NW Lake Place dead ends is slated to have a recreational marijuana dispensary on the first floor and three short-term rentals on the second and third floors.

Wayne Powderly, senior project manager for SunWest Builders, said they started the project on Oct. 3, and look to have it completed by mid-July. According to the online County property information page, Vendant Ventures owns the property. The 11,000-plus square foot building will have two two-bed rentals and four one-bed rentals, measuring from 540 to 790 square feet, according to documents filed with Bend's Community Development Department.

Griffin Heating and Cooling, which has its business across NW Lake Place from the new building, had raised issues about traffic in the area but they were resolved, Powderly told the Source. City planning documents said a 14-spot parking facility is in the works.

The Boneyard Beer taproom on NW Lake Place has a small parking facility that is often full in the summertime. Boneyard's Marketing and Events Coordinator Liz Mario said if the new building has overflow parking issues, it won't affect the taproom.

"We will have already moved into the pub," Mario said. "The taproom will close down, but we have time left on the lease, so we'll still brew there."