Garage breweries setting the tempo in the Cherry City 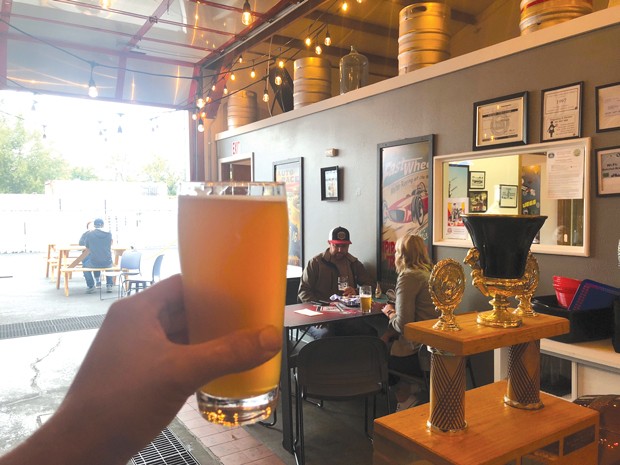 Compared to Bend's booming beer scene, Portland's dozens of craft sites and all the many wineries of the Willamette Valley, Oregon's capital city has never been known as a hotspot for craft beverage fans. Despite being the second largest city in the state, Salem only really had two breweries of note for many years—Gilgamesh and Santiam, both of which distribute in Bend. While both are solid, they weren't necessarily worth traveling two and a half hours from Central Oregon to check out.

In the past year, however, things have been rapidly changing. The local beer and cider scene has grown to the point that Salem has a passport-style ale trail in place, and four locations in the southeastern "Brewery District" of the city are all within a 15-minute walk of each other—mostly on roads without sidewalks, though, so be careful after dark.

Santiam Brewing (2544 19th St. SE) is the largest shop on this tour, having undergone a major renovation in 2016 to double its size. The taplist has always leaned toward English and German-style lagers and ales, with the 1859 Maibock one of the best-known flagships. Four cask-conditioned ales are on offer all the time. Not too far away is Salem Ale Works (2315 25th St. SE), another quickly growing outfit that offers a litany of IPAs (hazy and non), as well as the wonderfully-named Sun's Out Gun Stout.

Really making Salem an interesting destination for beer fans, however, are the garage outfits in between these two old standbys. Bine Valley Brewing (2027 25th St. SE) is in SAW's old property, a hole-in-the-wall industrial site with a one-barrel system that happens to be putting out some of the best beer in the Willamette. (The Alterdorf is a killer altbier, and the Tropic Haze IPA tastes exactly like the name suggests.) The similarly-tiny Ratchet Brewery (2701 22nd St. SE) is also worth a visit, featuring a motorcycle aesthetic and the Deuce Coupe, a lovely IPA in the more standard tradition.

It's a wonderful way to spend a weekend—and anyone planning a visit this fall simply must plan a detour to Benedictine Brewery in nearby Mount Angel, one of only three monastic breweries in the United States.