A Beacon of Light for the Homeless, the Addicted and the Distressed 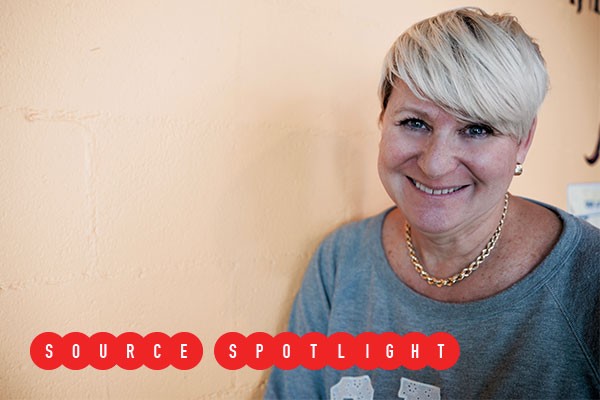 hen I first walked into Pfeifer and Associates, I thought I had mistakenly gone into the tattoo shop next door. Funky, brightly colored walls, industrial counters and smiley, pierced and tattooed folk greeted my confused self. Sandwiched behind the Domino Room, this unassuming office space is home to bubbly, no-nonsense Sally Pfeifer, owner and executive director of Central Oregon's largest drug and alcohol outpatient treatment provider — serving the underserved adults with alcohol and drug addiction.

As a career certified drug and alcohol counselor from Washington state, Pfeifer has seen the gamut of issues throughout her 30 years in the industry, realizing homelessness was a crucial component to many of her clients struggling with their addictions. The Source Weekly has profiled some of the issues and barriers, in our housing crisis series that those facing addiction and mental illness face in finding housing. There has been a steep 31 percent increase this year alone in Central Oregon.

"Housing is key," begins Pfeifer as she sits back in her office. "How can you work on yourself when you're cold, in the bushes and hungry? I don't have the magic answer, but I do know that the best recipe for success is the Housing First Model — it's used in Canada, in Europe, it basically been proven to wipe out homelessness." Pfeifer is referring to what the National Alliance to End Homelessness calls an assistance program providing permanent housing, which provides a platform for individuals to pursue personal goals and improve their quality of life.

Realizing there were lengthy waiting lists, no permanent homeless shelters and no affordable housing solutions in sight, Pfeifer, with the help of a few other generous individuals, opened their first transitional house in 2015. She now has eight, serving 153 individuals, 49 of whom are children.

"These homes are about 4,500 square foot, gender specific, clean and sober spaces with a live-in staff member and we don't do any treatment there," she says, "... on average, residents spend about nine months there." Mothers live with other mothers, and men live with other men and there's no drug or alcohol consumption allowed, safeguarded with routine drug tests. Tenants are responsible for their $500 a month rent, but Pfeifer secures the lease, the first and last month's rent, security deposits and utilities. "It costs about $5,000 to set one of these up, provided I can even find a house to do it in." Landlords, and for the most part, neighbors, are fully aware and supportive of the transitional space, with Pfeifer noting she's actually receiving calls from landowners wanting to participate in the program.

"There's a stigma surrounding transitional housing, but in the three years we've had them, we've had only one emergency room visit... and no police visits. That's virtually unheard of in this community. So landlords, realizing this, are starting to come around and offering up homes, though in this market, it's nearly impossible to find something to rent." Pfeifer says she's housing more homeless than the Bethlehem Inn.

The mother of three says she's the visionary, but needs help with the execution. "I'm horrible at one step at a time. I can see what should happen, but if I'm at step A, I need help with B and C to get to D... thankfully I have amazing people and staff surrounding me that get me there." In fact, many of Pfeifer's staff members are ex-treatment members—a testament to her success.

"Our dream is a three-tier approach.So you'd have permanent campers who would manage the camp from day to day, then a second section of campers coming in and out and staying a bit longer, and then sleeping pods for those needing immediate shelter." — Sally Pfeifer tweet this

Her vision for the future? Permanent housing camps such as those found in Portland. Pulling out a copy of "Tent City Urbanism, From Self Organized Camps to Tiny House Villages," by Andrew Heben, she says a hybrid model is what Central Oregon needs. "Our dream is a three-tier approach," she says, her passion evident. "So you'd have permanent campers who would manage the camp from day to day, then a second section of campers coming in and out and staying a bit longer, and then sleeping pods for those needing immediate shelter." Pfeifer wants the sleeping pods to offer 12 hours of uninterrupted sleep for campers. "Think about if you don't get enough sleep... it leads to mental health issues, attitude shifts, relapses because you're not feeling good... And most of these people never get any interrupted sleep when they're on the street."

The going will no doubt be tough. But with her nonprofit, Sagewood Sanctuary, moving through the process of becoming registered, she hopes a permanent homeless camp, complete with mental health services is feasible in the future. "Portland runs one for as little as $1,800 a month... solving the homeless issue in Bend is not inconceivable."

Pfeifer declares, "We need to take this community from outside of the fringes and include them in the solution. They're in our backyard... and everyone deserves a right to survive."