A chat with Elizabeth Woody, who brings poetic discourse to the environmental movement

January 24, 2020
comment
How do ancient teachings—passed down through generations of Native Americans—apply to contemporary perspectives on the environment? Where do spirituality, pragmatism and ecological science intersect? 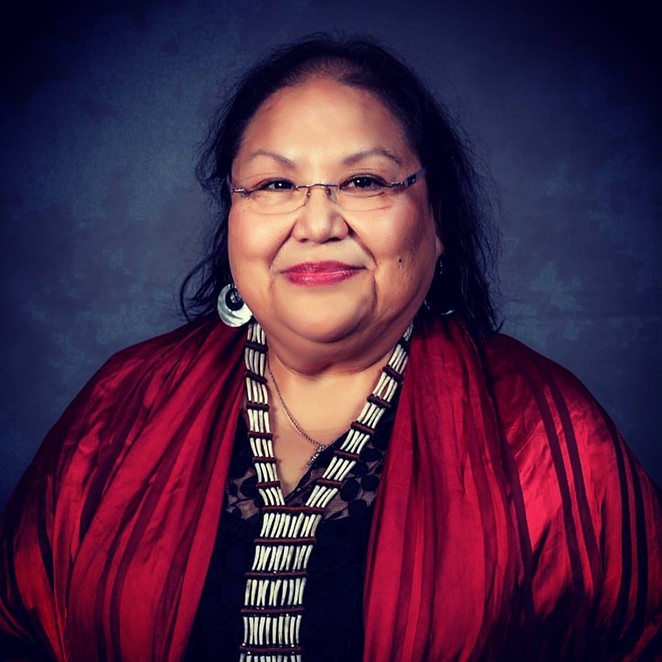 In a society that depends on scientific studies and policy solutions to describe and mitigate the destruction of the environment, poet, artist and social organizer Elizabeth Woody uses the power of storytelling to transmit “the way of knowing” of her ancestors (Salmon people) who lived throughout the Columbia River Basin for 10,000 years.

Woody will share her writing and memories in a presentation titled "The Long Memory of the Land" at the Tower Theater on Wednesday, Jan. 29 at 7 p.m. to a sold-out audience. The event is hosted by Deschutes Land Trust as part of their Nature Night series. Woody currently works as the executive director of the Museum at Warm Springs.

Woody’s message is one of responsibility and the transactional consequences of taking too much from the land without giving back in return.

“When I would go out with my grandmother, when I learned how to gather medicinal plants, we walked quietly and respectfully,” Woody told the Source via telephone. “She told me to be careful not to break any branches. If we found a plant… the first one, we would talk to it, and say we’re gathering you for this reason. Our tradition is to leave something in return, a gift, a penny, some tobacco…”

Woody spent most of her childhood in Madras with her grandparents and on the tribal lands of the Confederated Tribes of Warm Springs, along with her extended family. Her grandparents wanted to live in town and close to the local public schools so that Woody would not have to commute in from Warm Springs an hour every day. Her family placed a high value on education.

“My grandmother taught herself to read using only the newspaper and a dictionary,” Woody said. “She told me ‘If you go to college, it’s like money in the bank, you’ll get every penny back.’ So I started saving for college when I was four years old.”

Indigenous cultures were all connected through the ecosystem and had a similar understanding about the abundance of salmon. They learned that if they made the wrong choice and took too many salmon it could lead to destruction, to hunger. -Elizabeth Woody tweet this
Even though Woody scored in the top percentile on national standardized tests, she said she had a hard time in high school because of conflict between the kids who came from Warm Springs and the teachers and administration at school in Madras. Many Native American students dropped out in ninth grade, she said. Her guidance counselor discouraged her from going to college, and advised her to work in a factory because she was “good with her hands.”

“I was good with my hands because I am an artist!” Woody said. She went on to illustrate Sherman Alexie’s book of poems “Old Shirts & New Skins” in 1993.

During Woody’s senior year in Madras, she was expelled after her vice principal falsely accused her of truancy and Woody refused to plead guilty.

Simultaneously, she won a statewide writing contest and had the opportunity to study with the top writers in Oregon. After she was exposed to other writers who “shared (her) vision of the world,” she got her GED and left Madras. She took writing courses at Portland State University and the Institute of American Indian Arts and eventually earned her Bachelor of the Arts from The Evergreen State College. In 2016, she became the first Native American named Oregon’s Poet Laureate.

Throughout her life, Woody channeled her experience of racism into positive actions that both moved her forward and honored her culture. She published her first book at age 28, called “Hand into Stone” (1988),  later reprinted as “Seven Hands, Seven Hearts” and won the American Book Award. Her intent with poetry is to create both sympathy and understanding between her own culture and that of the non-Native American reader.

She also described how she overcame prejudice while working for nonprofits in Portland during an era of controversy around affirmative action.

“Some people thought of me as the Indian hired to diversify the staff,” Woody said. “I had to get my MPA so I could have the credentials to do what was important. I already had leadership skills. I knew how to keep people motivated.”

Woody earned her Master of Public Administration through the Executive Leadership Institute of the Mark O. Hatfield School of Government at Portland State University in 2012. She worked for the environmental nonprofit Ecotrust for more than a decade and became their first Director of Indigenous Leadership. Woody inaugurated the Indigenous Leadership Award in 2001, which has since celebrated the work of 57 indigenous leaders across the region.

Today, she continues to build a bridge between the ethos of the people of Wasco, Paiute and Warm Springs and the environmental movement.

The poem below is published with permission:

Father, It is the Language's Desire
by Elizabeth Woody

Father, security found in the embrace of the language encoded in the child is rendered as daughter.
In the blue air of twilight —- and at dawn —- dirt and path rumbles under a calming trot.
The sky does not end so easily in the patter of the hard rain.
You seem near.
The clinging wet hair is a cloak of absence.
We know about water.
It attracts the current by gravity.
This includes the grave thoughts of what protection is offered the assaulted.
A fierce incarnation of your lineage; the black lace on the forehead and blanket’s rough texture are not contradictions.
Transpose the sound and it is the language’s desire to move as the wind. Masculine genesis forces the water to rise up and fall as hard currents.
As rain, awestruck by the sweet corn’s thirst, the shirring wind of its tongues, rattle incomprehensible words.