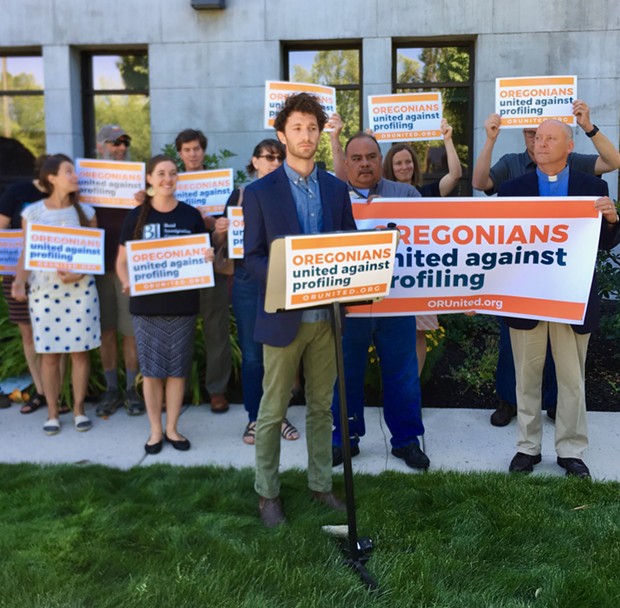 On July 9, over 20 people holding signs that read "Oregonians united against profiling" gathered near the steps of the Deschutes County Courthouse to speak out against efforts to get rid of Oregon's "sanctuary law."

Deschutes District Attorney John Hummel, Noah Goldberg-Jaffe of the Oregon AFL-CIO, Bend Lutheran minister Erika Spaet and Rural Organizing Project board member, Josefina Riggs all spoke out against initiative petition 22. IP22 would repeal the 1987 law forbidding state agencies, including law enforcement, from using state resources or personnel to detect or apprehend persons in violation of federal immigration law, according to the Secretary of State's complete text of the initiative.

Three Republican members of the Oregon House, Sal Esquivel (R-Medford), Mike Nearman (R-Independence) and Greg Barreto, (R-Grove) filed the proposal with the Secretary of State's office on April 25, 2017, according to Ballotpedia. Oregon law required 88,184 valid signatures by July 6 to get on the November ballot. According to proponents of the initiative, the Secretary of State's office received 105,000 signatures on July 5.

"The current law also prohibits the unfair targeting, interrogating and detaining of Oregonians simply because they are perceived to be undocumented," Hummel said. "Oregon law has worked well for 30-plus years and has been a model for the nation on how to balance liberty, justice and safety," Hummel said. "But then along comes a group of people who want to throw out Oregon's 30-year law and instead have our local police officers act as federal immigrations agents. This will result in a less safe Deschutes County."