Pooped on by a parrot. Straddled by strippers. Brought to tears by the blind.

These are all experiences that Mani Pureheart, a mostly retired mall Santa, has under his thick black pleather belt. To Pureheart, becoming Santa over 25 years ago was far more than a seasonal job. It was about embodying the values he has always held near and dear to his heart. While Pureheart now devotes most of his time to writing books, spiritual healing, rock shows and his professional psychic practice, he stills finds time to bring Santa to members of the community in need of some extra holiday spirit. 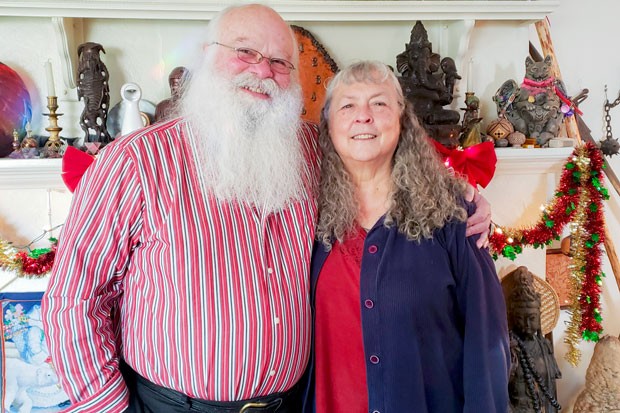 Pureheart welcomed me into his home with a polished, "Ho ho ho!" The house smelled of incense, and was decorated with a dense collection of impressive artifacts (including a fossilized dinosaur egg and Megalodon tooth, which he showed me proudly). While not quite how I'd imagined Santa's North Pole estate, the décor made sense; the love was palpable. When I asked if he still frequented the mall scene, he told me that his severe tinnitus makes the clatter and noise of the mall too painful.

"Plus, the children keep getting heavier, the elves keep getting lazier... it's hard to lift children up onto your lap all day when you get to be my age." At 75 years young, Pureheart is on track to get his black belt in taekwondo this summer. Yes, Santa wears a "gi," the traditional, white two-piece outfit of that martial art.

“Santa is a confessional, a counselor, a bartender, a priest. You’re there to help, you’re there to love, and that love takes different forms. It’s all about love, and doing all you can to make the world a better place.”—Mani Pureheart (Santa Claus) tweet this

Most of the questions I had revolved around funny Santa experiences:

"What was the craziest thing a kid ever asked for?" Alligator.

"Do you ever get heart-wrenching requests?" Santa, can you bring my mommy back?

"For me, being Santa is a very, very deep experience," Pureheart explained. "Santa isn't just for children... I've had adults, men and women, come and sit on my lap and say, 'I've tried everything else. I don't know where else to go. I need help.' Santa is a confessional, a counselor, a bartender, a priest. You're there to help, you're there to love, and that love takes different forms. It's all about love, and doing all you can to make the world a better place."

He explained how the simple phrase "be love" has become the cornerstone of his life. "It's about mindfulness of others, and realizing that we all have a responsibility to help and love one another—to help one another advance in life." While one may assume that Santa is a man of Christian faith, Pureheart explained that his personal rendition of Santa is deeply spiritual, but anti-organized religion. "My religion is love," he said.

"I think that's how Santa's supposed to be," his wife, Kim, added.

For the past several years, Pureheart has been documenting his most memorable moments as Santa Claus on his Facebook page.

Once, while Santa-ing in Clovis, California, Pureheart had a run-in with a shy 7-year-old boy. This was right around the time that "Toy Story 2" came out, and movie-related toy requests were prevalent. When Santa asked the boy what he wanted for Christmas, he mumbled his response. Upon asking him to repeat his request, the boy stood up on the chair and yelled, "I want a BIG WOODY for Christmas!!!" The crowded room suddenly fell silent, Pureheart explained.

Like that one, not all of his experiences were PG, or PC. Bringing Santa into retirement communities sometimes resulted in some pretty racy commentary.

"There was a little old lady and her husband; they brought their grandson to sit on my lap. Her husband and grandson went to go get the photograph from the elf, and she stayed behind. She leaned in real close, and whispered to me, 'Hey Santa... you can slide down my chimney anytime.'" Pureheart laughed at the memory. 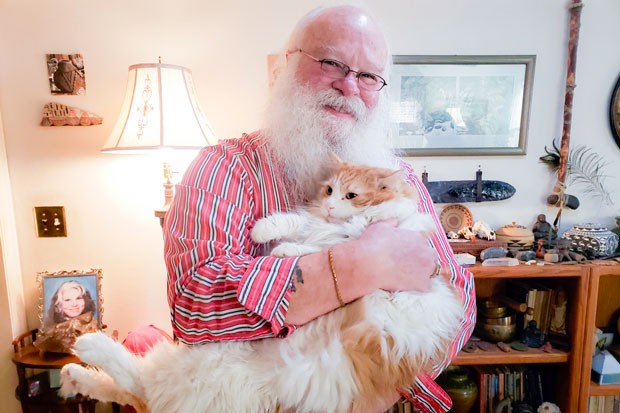 He also described being bombarded by a group of women in full-length raincoats at a "scruffy" mall in Springfield. A spokeswoman asked if the women could sit on Santa's lap, and he obliged. When the women stripped off their coats, he was surprised to find they were clad in... nearly nothing. "What they were wearing was bright and colorful, spangled and feathered, and displayed their copious assets to their best advantage," Pureheart explained in one of his written stories. "I could not turn these lovely damsels away once I told them we would take their photo, so I gritted my teeth and invited the four of them to arrange themselves as close to Santa as physics and propriety would allow."

Pureheart's most recent story involves a parrot named Pico. He explained that one of the most common questions he's asked is, "How many times have you been peed on?" Up until that fateful day, his "accident" record was squeaky clean. After investing in a brand-new, specially manufactured suit, he visited a local retirement community. A woman waltzed in with her pet parrot perched on a de-barked tree branch. "I remember thinking, 'I hope he doesn't poop on me,'" he wrote. "No sooner had I thought that, then Pico paced to the center of the stick, directly over the sparkling white fur at the bottom of my new Santa jacket. I knew. Pico knew that I knew, and was savoring the moment." Technically, Santa has never been peed upon—but he has been pooped on by a parrot.

Pureheart shared some heart-wrenching stories as well. The first experience he had with a drunken, verbally abusive father left him searching for a way to help, should the situation ever arise again. "Don't give her nothin', Santa, she ain't nothin' anyway," he remembers the dad drunkenly yelling. "Give her a doll with the head ripped off." After searching for answers for several days, he came across a manufacturer that produced small, Santa-shaped bells, and purchased 50 on the spot.

He noted that over the years he gave quite a few of these bells away, but always reserved them for very special cases. The last bell he handed out went to a 10-year-old boy who reminded him of himself at that age. "My childhood was anything but pleasant," Pureheart shared. "There was a lot of emotional damage, so I have a great deal of sympathy for children in similar situations. I wanted to do something that would make a lasting impact on children—and, sometimes, adults." The boy's father had wandered off, and there was no line, so Pureheart took the opportunity to speak to him of ridicule and loneliness, of perseverance and the importance of always remembering that he was loved. "I told him to listen to the bell whenever he was sad or lonely, and remember that Santa loves him."

Pureheart got choked up while relaying the next story, which he deemed his "favorite Santa story of all." On a blustery night at an upscale mall in Tigard, Santa ran into a group a of several "well-seasoned adults." A tiny woman, age 90 or so, caught his eye. He approached her and said, "Good evening, mother." Another member of the group informed, "She can't see you, Santa. She's blind." She perked up at the mention of Santa, and began to cry as he moved closer to her, allowing her to feel his suit and stroke his beard. "I gave her a gentle hug and whispered in her ear, 'Merry Christmas. Santa has always loved you.' There were waterworks all around as I turned to continue on my way."

He noted that experiences like these remind him he has the power to change a bad day into a good day—that the love he brings as Santa transcends age, religion, social standing and physical disability. "Being Santa has been a tremendous gift to me, and I'm so fortunate that I can share this gift with the world."

From naughty grandmas and 7-year-olds to struggling adults in need of an empathetic ear, Santa reminds us that at the root of the season is one poignant message: be love.

"Santa is all in the heart—it's not in the suit you put on."