Listed as one of Oregon's Most Endangered Places, the 1940s lodge renovation is well underway

Located just west of the Hoodoo Ski Bowl at Santiam Pass, the historic Santiam Pass Ski Lodge is garnering the attention it deserves. Built by the Civilian Conservation Corps from July 1939 to February 1940, the lodge has stood empty and deserted since 1986, except for some periodic maintenance by the U.S. Forest Service and wandering rodents. But restoration efforts now underway are breathing new life into the structure, which is listed on the Federal Register of Historic Places and which Restore Oregon lists as one of Oregon's Most Endangered Places.

The restoration efforts, led by Susan and Dwight Sheets of Salem, with guidance from Restore Oregon and the Willamette National Forest, have been rewarding. 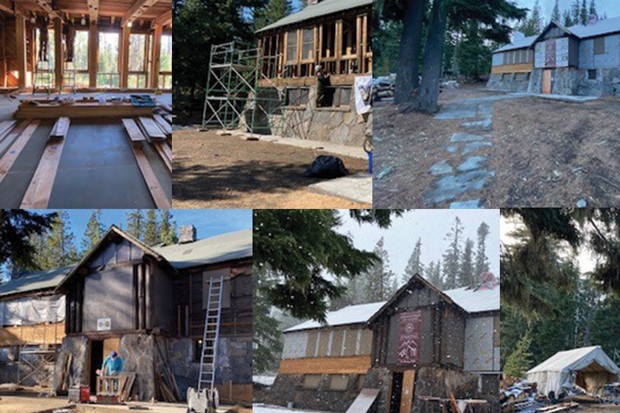 "We both grew up in the [Willamette] Valley and skied at Hoodoo, then visited the lodge when it was open," said Susan Sheets. Though they moved away for about 30 years, the Sheets would occasionally return to Oregon to visit family and see what was up with the then boarded-up lodge. After returning to Salem in 2015, the Sheets took a Forest Service tour of the lodge.

"We just saw so much potential in this beautiful lodge and decided we needed to do something about it," added Dwight Sheets. The couple signed a five-year special use permit with the Forest Service to undertake restoration efforts and provide a vision for the future operation of the lodge. Under the proverbial saying of, "It takes a village to raise a child," numerous partners and private donors have contributed time, money and effort to get restoration efforts underway. The Sheets also formed Friends of the Santiam Pass Ski Lodge, a nonprofit helping fundraise and oversee the work.

The lodge was one of six built by the CCC in the Northwest; this one providing opportunities to enjoy the growing winter recreation in the Three Fingered Jack Winter Sports Area and skiing at the Hoodoo Ski Bowl, founded in 1938. A council of representatives from various local outdoor groups and communities managed the lodge after it opened in 1940, providing meals and overnight bunks to skiers and travelers.

“We’re excited because people can see that this is a doable project and that it’s getting done.”—Dwight Sheets tweet this

"When my husband Sterling was 16, he got a job at Santiam Lodge helping the manager every weekend, and got paid $5 for doing that," said Gretchen Wilmer of Bend. She and Sterling met while skiing at Hoodoo while they were both in college, driving up to the pass in his Volkswagen Beetle with other friends. "I have fond memories of the great big fireplace in the main room, ping-pong games and delicious food in the dining room," added Wilmer.

Though the Santiam lodge thrived for many years, low snow years forced the council to cease operations in the 1950s. In 1958, the Presbyterian Church Council from Eugene stepped in to operate the site as a year-round youth and adult camp.

Alice Patterson and her late husband Ed managed the lodge for the Presbyterian Church from 1962 to 1986.

"We moved there in January 1962 with four little boys, and we lived in an A-frame house that was near the lodge," said Patterson. Winters were busy with youth and adult groups staying at the lodge, but summers also had Pacific Crest Trail hikers stopping in to pick up their packages or eat a meal. "I look back and think, that was an adventure. We promised ourselves we'd go for five years but then we ended up staying for 24." After Ed passed, Alice and her sons went up to the lodge to scatter his ashes. "Every one of my sons said, 'Mom, we had the best time growing up here.'" In 1987, the Church Council decided not to renew its permit and the lodge's doors closed for the next 30 years—until the Sheets arrived.

To tackle the issues of a building that mostly stood silent for over 30 years, the Friends board developed a three-phase restoration plan starting with sanitizing the interior and working on the main structure, working with contractors and volunteer groups such as Historicorps and Job Corps.

"We have gotten a significant amount of work done on the exterior and updated the electrical system," said Dwight Sheets. That work includes replacing rotten framing, installing a temporary roof, milling timber and more, along with delays and supply issues due to the pandemic. "We're excited because people can see that this is a doable project and that it's getting done," added Dwight Sheets. "Our goal is to have as many people use the lodge as possible."

That includes the Sheets, Wilmer and Patterson families, as well as thousands of others who share in the communal story of this historical lodge.