The effort to save Worrell Wayside, slated to become more parking

Dear Readers, there is a move afoot to destroy a unique—and meaningful—little natural area in downtown Bend, and make it into a parking lot, for crying out loud!

Worrell Wayside, a county park set aside nearly 25 years ago, "preserved and protected for public use," sets on an outcropping of relatively recent volcanic rocks from the early times of Newberry Monument, and is presently occupied by a beautiful selection of native plants and animals. It's located just a stone's throw north from the courthouse.

Deschutes County is planning to expand the present courthouse and, needing a new parking area for the expected upcoming traffic, cast more than a casual eye on what the commissioners call "the rock pile" next door. After considering several other options, they chose the least expensive, which would be to "redesign" the park with 68 parking spaces.

However, as it is, they really should have given that "rock pile" a lot more thought before they just wrote it off. Other people in Bend sure did, and I hope—after reading this, you will too.

Had you been wandering around in that beautiful area about 4,000 years ago you would have had to have been pretty quick on your feet, as lava flows from the then growing Newberry Caldera (volcano) were oozing into the area and are what Worrell Wayside is made of today.

And who was this Bill Worrell? According to a note I received from Alice Elshoff, retired teacher, he was a big mover and shaker in Bend back in the "good old days." 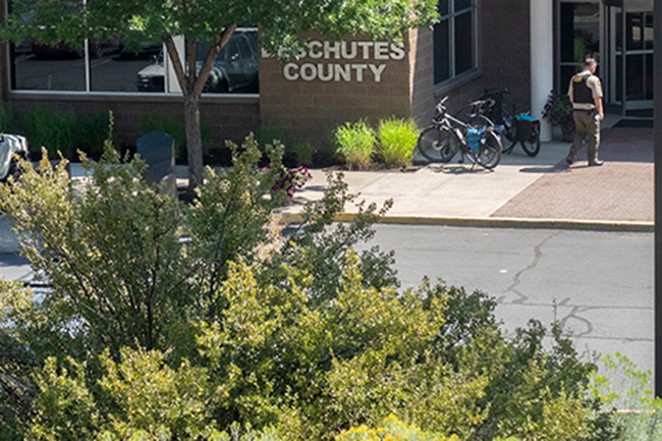 "He was also recognized as one of Oregon's outstanding education leaders many times and received numerous awards for his dedication and leadership. In honor of Bill's community leadership and contributions, the county park was named the Worrell Wayside County Park in downtown Bend, Oregon," Elshoff said.

In my book, you just can't dedicate such a special piece of scenic real estate and the nature of Central Oregon to a person who accomplished so much for the Central Oregon community, and with the stroke of pen and a couple of million bucks turn it into a parking lot.

In my view, here are a few reasons to save this little gem of a park:

• Respect and honor for a beloved citizen of Bend and his family for whom the park was dedicated.

• With open space being destroyed daily with impunity in the Bend area, making way for housing, more businesses, and other parking lots, it is more important than ever to preserve what is left of areas offering respite from concrete and asphalt.

• The few animals that call this place home would all be ignominiously destroyed or displaced, including deer, marmots, chipmunks, lizards, and a number of insects and birds. Bend resident, friend and outstanding birder Tom Crabtree says that at various times of the year you could find American crows, Anna's hummingbird, California scrub jay, Ruby-crowned kinglets, and Pygmy nuthatches using the resources the wayside offers. Robins and Waxwings feast on the juniper berries. Non-resident species also use such parks as overnight resting places during migration.

• We would lose some magnificent Ponderosa Pines that have seen their neighbors felled over the years to make way for construction.

• We would also lose an outdoor classroom for children who, with their teacher, can study geology, biology, botany and environmental conservation all in one small place!

Currently the park has trails, picnic tables, benches, a gazebo and an open space at the top of the outcropping for larger gatherings. There is nothing else like this iconic sliver of High Desert in downtown Bend. If it is demolished and hauled away, it can never be recovered. And just what would the commissioners do with that beautiful dedication plaque?

This is a publicly owned park. If the commissioners do not respect the will of the majority of the people, what other natural areas will be at risk of being destroyed? They need to know the will of the people so please join me and write them a letter, or email them at citizeninput@deschutes.org. (Editor's note: At the request of Commissioner Patti Adair, we note that the decision to move forward with more parking was a vote of 2-1, with Adair voting against.)

Find out more about Worrell Wayside by going to saveworrellpark.com. Talk to your family and friends, and help save a sanctuary!