As fire bans happen earlier and earlier, these fire pits can let you stare into the flames (mostly) year-round

It's a primal urge: To stare into the flames under a blue-black bonnet, alive with tiny white stars.

Evolutionary Anthropologist Daniel Fesser of the University of California-Los Angeles has an explanation about humans' attraction to fire, saying in a 2012 article with Live Science that adults' "fascination with fire is a direct consequence of not having mastered it as a child." Fessler contended that modern humans may not be required to make fire to survive—but in us is still that urge to know how to wield it. 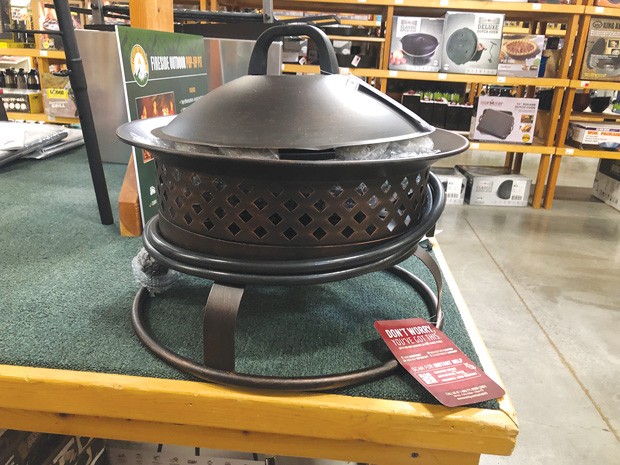 Maybe that's why many of us can be found staying up waaaay later than we should, sitting around a campfire, staring into those ever-changing licks of flame.

That is, until the next fire ban.

Last year's fire that decimated Paradise, California, woke me up to the notion that indeed, it can happen here. A dear friend lost her home in that blaze, and Central Oregon seems to be only a slightly-wetter summer tinderbox than Northern California.

When fire officials announced a (temporary) fire ban in parts of the state earlier this spring—months ahead of the normal late-summer bans—it seemed a portent of what's to come, with our long, now-green grasses soon turning to yellow.

During a fire ban, I'm guessing not a few of you have found yourselves attempting to make S'Mores over the open flame of your Coleman stove—but there is a better way: The portable, gas-powered fire pit. Each of the three portable pits I checked out offers that tantalizing flame we humans are so drawn to—and enough of it that you can cook a dog or a S'More over it.

What's more, local fire officials, for the most part, will let you use them, even during a fire ban. (There are still places you can't use them, so keep reading.)

Where to get your portable gas fire pit in Bend

At the Bend Bi-Mart, I found the Flame One Portable Fireplace, powered, like the others, by propane. At $89.99 (plus the Bi-Mart lifetime family membership, at $5), it was the most affordable local option, and the store had plenty in stock. When I asked the staff how much gas this baby would suck up in a night, they said, "not much." Since any of the options listed here require you to lug along a standard 20-pound propane tank, suffice it to say you'll have enough gas for a few hours of fire each night of a weekend.


The Bend Sportsman's Warehouse has two models. There's the Bond Mfg Aurora Portable Gas Steel Fire Bowl, which sells for $109 and is advertised to run for 15 hours on a 20-gallon tank.

Then there's the Camco Little Red Campfire, retailing for $134.99, which comes with a handy top that goes over the device and makes it easy to tote around.

All of the three pits adhere to one of Bend Fire's informal recommendations for portable fire pits—which is to ensure that the heat source isn't directly on the ground. The Little Red Campfire has a solid metal base that touches the ground, while the other two have a metal support ring for the base.

Each portable gas fire pit comes with some pretty explicit instructions: Check with the local land managers to find out whether you can use these products during a fire ban.


Inside the city of Bend, you can use a portable gas fire pit (nearly) anytime, so long as you follow the recommendations of the manufacturer, says Bend Deputy Fire Marshal Dan Derlacki. Those recommendations might include clearing the space of debris or giving a certain amount of space between the flames and flammable items, for example.

As of this writing, the Deschutes National Forest and most nearby Bureau of Land Management lands are not under a fire ban—but when the fire bans come, you can still use portable gas fire pits on most lands. One exception: BLM-administered lands within the John Day and Deschutes Rivers, where there's been a fire ban in place since June 1.

On Forest Service lands, you can use your portable gas fire pit in both developed and dispersed camping areas, "As long as there is a 6-foot diameter area cleared of all flammable material to prevent the accidental spread of fire to the wildland," according to Deschutes NF Assistant Fire Management Officer Jeff Bishop.

Bishop added that if the fire danger increases, they may ban all propane devices.

And while this information is up to date right now, let this be a lesson that it's important to know which lands you're recreating on, and who to contact to ask more questions before you light that fire.