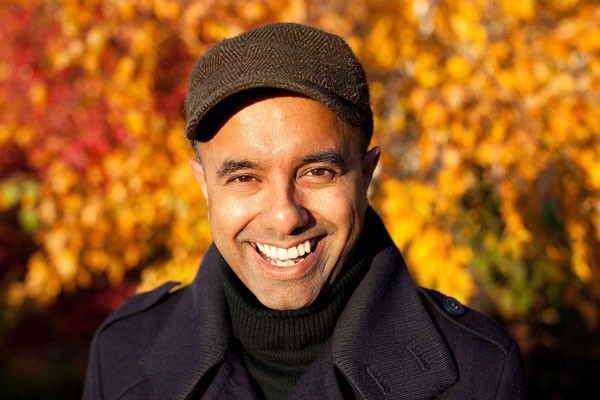 How to create believable, relatable fictional characters? Rakesh Satyal knows a thing or two about that.

The national prize-winning author will speak Sunday about his latest novel, "No One Can Pronounce My Name," at the final, free event of Deschutes Public Library's 2018 "Novel Idea... Read Together" program. Attendees will have the opportunity to hear directly from the novelist about the writing process.

"I'm going to talk about some of the mechanical and logistical things that go into the writing process, but one of the themes I really want to be talking about is the idea of friendship and community. I think those are the themes that emerge most prominently in the story. There will be some fun elements too, a certain lightheartedness," Satyal told the Source Weekly.

The author also hints that "there may be some musical surprises," possibly referring to his experience as a cabaret performer. "It's something I enjoy doing from time to time."

Satya, a first-generation American, born in Ohio to Indian parents, uses the characters in his book to explore the ways various relationships develop, the ways our relationships grow us, and the kinds of things that get in the way. One of those: our tendency to make assumptions about each other. One way he approaches that issue is through the names he chooses for his characters.

"One of the character names I found fascinating was in (author Toni Morrison's novel) 'Beloved,' the main character Sethe. One of the things that struck me is that I was never quite certain exactly how you pronounced the name. I found that very disorienting—and meaningful. If you don't know how to pronounce a name, it creates a kind of mystery around the character and a willingness to learn the truth about the person. One of the things I was exploring here was that, in giving the characters names that are difficult to pronounce, the reader would feel a certain sense of alienation and almost mimic the alienation that the characters themselves are feeling."

"That creative process is very cathartic. It's how you can reckon and wrestle with the big questions of identity and humanity and compassion. It allows you the space and time to do that." —Rakesh Satyal tweet this

The Novel Idea program has grown tremendously since its inception 14 years ago. "Novel Idea was one of my ideas to pull the community into the library in an unexpected way," says developer and project manager Chantal Strobel. "We're trying to pull people in from all different backgrounds, all different socio-economic levels and educational levels, and find programs that will be meaningful for all the people in the county."

Novel selections are unveiled each December, after a long selection process that begins with suggestions from the public.

"We have discussion groups at bookstores around town and all of the libraries, and we encourage people within their own neighborhoods to make this their read." Reader's guides and book club kits are available at all Deschutes County library branches. "Everything from menu items, favorite recipes and maybe an article or other background to bring elements of the book into context. We distribute about 150 book club kits a year throughout the county, reaching about 1,500 to 2,000 people, depending on the size of the book clubs."

The program has grown from 600 participants in 2004 to over 7,000 in 2018, according to Strobel, offering roughly 30 book-themed events this year including group book talks, cooking demonstrations, crafts and lectures by scholars from the Pacific Northwest.

"This is my first foray into the area," Satyal says. "I feel lucky that of all the places (in Oregon), I get to go first to what looks to be a very beautiful place."

I told Satyal that based on his book—Satyal's second novel—I got the impression that he was a man who has found true happiness and success, from within.

"That's lovely – and I think you're right!" he laughed. "That creative process is very cathartic. It's how you can reckon and wrestle with the big questions of identity and humanity and compassion. It allows you the space and time to do that."