After 20 years with the Bend Police Department, including six years as chief, Jim Porter retired last month, leaving behind a legacy of innovation that improved his officers' physical and mental health, and garnered the department national recognition.

When Porter was hired on as interim chief in 2014, morale was really low among officers, he said. City Manager Eric King had fired the former police chief who was known for an aloof style of leadership that was more militaristic than service oriented, Porter described. In the midst of that drama, the BPD's Public Information Officer resigned after it was revealed he was having sexual relations with three city employees and one member of the media.

"We came through some pretty significant personnel issues at that time," Porter explained. "We spent a lot of time on the wrong side of the news and we'd lost internal accountability and we lost accountability with our staff. Our officers were not performing to the optimum they should have as an organization. Our officers were starting to feel disconnected. They really didn't like coming to work and were disgruntled. It was just probably the worst time I'd seen in a police organization in my career."

On top of all that, one of the department's most popular mentors, Sgt. Johnny Lawrence, died of a heart attack that year. In the years proceeding Lawrence's death, five other BPD officers also suffered heart attacks, according to Oregon Public Broadcasting.

Overall, the life expectancy of a police officer in the U.S. is 20 years less than civilians due to the stress of their occupation and the heart problems that follow, according to the International Journal of Emergency Mental Health. Officers are 25 times more likely to suffer death or disability from a heart attack than from the violent actions of suspects, the study found.

As Porter looked around and saw what the stress of the profession was doing to members of his department, he also felt the effects firsthand. Porter said he'd spent 17 years working with a SWAT team and also in the narcotics division and began to see that the job was really wearing on him. He felt like he didn't have time to recover on his days off, and so would bring the fatigue of his long, stressful days home to his family. He decided that something needed to change.

According to the National Alliance on Mental Health, the majority of police officers in the U.S. face alcohol abuse, depression, post-traumatic stress disorder and suicidal thoughts. A 2018 study of the Bend Police Department found that four officers had seriously contemplated committing suicide since they began working for the department. The Bend Fire Department has lost eight firefighters to suicide over the last two decades, and the 2018 study found that eight firefighters were currently considering it.

"Officer wellness is the ability for an officer to recover from the traumatic calls that they go to," Porter said. "It's the ability to be resilient and recover their sleep patterns; their ability to actually engage at home in a meaningful way rather than just having to wait to go back to work. To me, it meant more than just earning a paycheck. It meant a way of life where the family was also involved for the betterment of wellness... Because this this job can be so toxic."

Porter created and supported a number of programs to improve the emotional and physical health of his officers, which has transformed their morale and job satisfaction over the last six years.

Porter, along with Lt. Brian Beekman and Sgt. Scott Vincent, created the Johnny Lawrence Project in honor of Sgt. Lawrence, which included a program of stretching and yoga at the beginning of some shifts as well as a decompression period of mindfulness and meditation at the end of each shift so that officers don't take home the stress of their day. 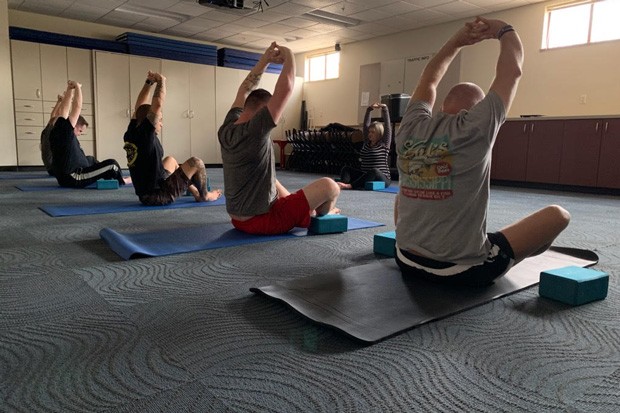 Porter brought on a half-time psychologist, Dr. Andrew Barram, which the BPD splits with Bend Fire & Rescue. The department developed a 15-person peer support team to help officers through times of both professional and personal crisis; all members of the team were chosen by the officers and had 36 hours of training in peer support.

The program also provided a free wellness screening and confidential physical and mental health treatment for officers. Officers now have time set aside to work out during each shift, just as the fire department had been doing for decades.

In order to prevent officer injuries, Porter focused on the ergonomics of the equipment the police crew used. He encouraged the City of Bend to invest in larger, more comfortable vehicles, and changed out the protective gear and protective vests the officers were required to wear. All of this has resulted in fewer officer sick days in the department over the years.

He created a police spouse program, which grew into a support group of sorts. The families had access to training and counseling to help process their experience of the challenges of being married to someone in law enforcement. In a very short time, Porter managed to turn the department around, and because of its national reputation—it won the U.S. Department of Justice Officer Wellness Award in 2018—the department has been able to hire top talent from all over the country.

When asked about the "defund the police" movement, Porter didn't get defensive, but said he saw it through the lens of public frustration over a lack of social safety nets—a sentiment he said that many officers share. Proponents of the "defund" movement argue that cities should shift money away from police departments and toward social workers, professional counselors and other services.

When you hear ‘defund police,’ what you hear is ‘we want social services better funded, we want housing better funded. We want things to change.’—Former Bend Police Chief Jim Porter tweet this

Since Porter came on as chief, the number of mental health calls that have come into 911 has skyrocketed, Porter said. The 2019 BPD Force Response Report reveals these calls have gone up more than 10% a year since 2014. Porter helped to form a team specifically trained to go out on these calls, partnering with Deschutes County Behavioral Health to embed a full-time counselor into the force. Still, Porter believes there is more work to be done.

"Here's the challenge: law enforcement has been asked to address the homelessness issue; we've been asked to address the mental health issue," Porter said. "That is not our area of expertise. The answer is not to have police shove homeless people from one place to another. We have a residential crisis where people can't find a place to live. We have people with mental health issues living under bridges, people with addictions living underneath bridges. When you hear 'defund police,' what you hear is 'we want social services better funded, we want housing better funded. We want things to change.'"

What about George Floyd?

Porter released a public statement on May 29 in regard to the killing of George Floyd by a Minneapolis Police Officer. How did his officers respond?

"Inside, my officers are confused. Some of them are very angry. They're saying, 'I am not a racist, I would never do that to someone of color. I just hate the fact that we have to come out even defend ourselves.' I have officers who adopted biracial kids; I have officers who've adopted children of color and they're saying 'I am not a racist, but now I have to wear this because of him.'

"But a lot of [the officers] recognize we all have implicit bias. We just do. The problem with a lot of police training is we're trained into that implicit bias because we're told of cues of criminal activity, and views of trafficking and those kinds of things, and we have quite frankly a little bit of implicit bias. We're working to move away from that."

When Porter began in 2014, a Portland State University community survey found that 54% of respondents who live here trusted Bend PD to "do the right thing." That rose to 86% last year.