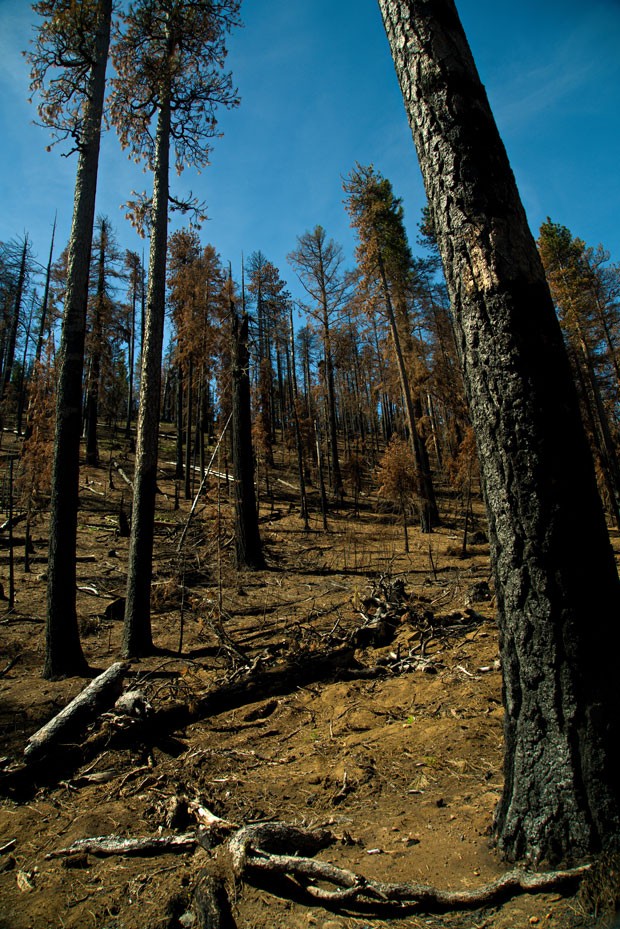 McKenzie Pass is closed at least through Thursday at milepost 70 eastbound and milepost 81 westbound due to mud over the highway after Wednesday's storms. Check ODOT's website for up to date information on when the pass will reopen.


Peter Murphy at the Oregon Department of Transportation loves McKenzie Pass. "You can't get this scenic sense from any other drive in Oregon. It's like no other drive anywhere." But for many of those who drive the pass this summer and fall, it may be a shock to the eyes. The pass reopened June 18 after its annual winter closure.

There are deep scars from last year's 24,000-acre Milli Fire, which ravaged the forest on both sides of the narrow road leading up to snow-capped mountain views and lava flows. "The Milli Fire was devastating," Murphy says.

As you drive from Sisters through the forest, old-growth ponderosa stands still grace the roadsides and slopes. That soon turns to a moonscape-like appearance, with thousands of burned snags. "For those who remember this drive as that green tree-surrounded drive, it's gonna be a change."

As the forest burned, there was also much damage to the road shoulders and pavement, which ODOT has repaired.

"Fire is a cycle of forest life," Murphy says. "We tend to measure it in our short life spans, but it's been happening for thousands of years, and grasses and other plant life are already coming back."

Kevin Foss, lead ranger for the Deschutes National Forest, agrees. "The forest itself is built on fire. Central Oregon has been built on fire." Without fire, Foss says many species of trees probably would not exist or be much different from what they are today.

"The impact of these fires is hard to look at, but if you look closely you'll notice there is already new vegetation growing from that fire. It's resetting the forest. While Milli was devastating, it allows us to celebrate a rebirth. Within two to three years, I guarantee you'll see the lodgepole start poking its head up and begin that next new forest."

McKenzie Pass was first carved through the mountains and lava to connect the Willamette Valley to Central Oregon at Camp Polk in 1872 and used as a toll road. Remnants of the old track are still found near the present paved road. Today, about 350 to 400 cars use the pass each day.